Power banks can be real lifesavers, but sometimes they can give us headaches too. One of the most common problems with portable chargers is that their lights might blink in a specific pattern, which is not easy to understand.

Erratic light blinking can also be associated with another issue, such as the power bank not charging. In this article, we’ll be exploring some of the most common causes and solutions.

The LED indicator lights and their functions

These lights usually blink during the recharging process. They also blink if you want to monitor how much power is left by pressing the power button, a feature that almost all power banks have. When you see 4  LED lights glowing steady, it means that the unit is fully charged.

Conversely, when you connect your mobile phone to the power bank, the LED indicator will start flashing, indicating the following:

At this point, you should disconnect the mobile phone, preventing the power bank from discharging completely, as it may damage its battery, especially when done repeatedly.

In some cases, you might notice the fact that the power bank is not charging even though it’s plugged in, and the LED lights are blinking. In other cases, you wait for several hours or a day, and the power bank just won’t charge, or it may charge halfway or somewhere in between, despite the lights showing it is fully charged. Something is not right.

Does this mean that the power bank died completely, or is it something trivial? The truth of the matter is that this situation has no simple yes/no answer. There are a lot of different scenarios that might cause this issue. This is why we’ve created the checklist below, which you can use to self-diagnose the problem.

The problem may be a minor fault that can be easily taken care of, or it can be a serious issue that requires professional repair. It could be one of the following problems:

1. Make sure that the power cable is fully inserted

It may happen that you simply didn’t fully insert the power plug in the charging port thus creating a faulty connection. Check the plug and see that it fits the socket snugly. Also, make sure that the power connector on the power bank is inserted fully in its socket. Make sure that there isn’t any type of debris in the charging port such as dust, sand, dirt, etc. Sometimes impurities stuck in the socket can cause a bad connection. Just make sure to do it carefully or you might break one of the pins.

3. Charge the power bank via a wall socket, not via a laptop USB

Make sure that you are charging the power bank from a main electric power outlet and not via a computer, as usually the output current from a computer USB port is around 0.5 A, which is not sufficiently high to charge the power bank.

4. Try charging the power bank with a different adaptor

It may be possible that the adaptor you’re using to charge your power bank either has gone faulty or outputs such a low value that the power bank is not charging. Try using a different adaptor instead. If this works, then you can be certain that the charger is faulty, and you should replace it.

If the power bank suffered a hard shock like a fall or was left in a hot environment for a long time, there is a possibility that its internal circuits have failed.

If you have used your power bank quite frequently, then the batteries may have completed their life. Power bank batteries have a life of 300 to 1000 power cycles, depending on the brand and model.

In all such cases, the problem is serious, and the power bank should be repaired professionally.

What to do if your power bank died

If you made sure that there is no other possible cause for the problem, and the power bank battery died, here’s what you can do.

Some helpful tips to keep your power bank healthy

Lithium-ion batteries are designed in such a way that they are charged to just below their full capacity before they attain the full voltage. They can discharge up to a certain voltage below which its internal circuits stop further discharge to protect the batteries. Overcharging or fully discharging reduces the life of the Lithium-ion batteries.

If the power bank batteries are totally discharged due to any reason and the voltage falls below a threshold, it may be difficult to recharge it. In such cases, give it more time, connected to a power source, until it slow trickle charges to a certain threshold level then starts its normal charging sequence.

Check our past article, for a deeper understanding of Lithium-ion batteries.

When the light indicator of your power bank is blinking, but it’s not really charging is a cause for concern as it might be a sign of malfunction. However, it doesn’t mean that the power bank is already broken, and it’s time to get a replacement; it could be just a case of wrong power bank-charger pairing.

Nonetheless, if your power bank is not working properly but it can be fixed by changing the cable or the charger, then do it yourself. However, if the issue persists, you should get it repaired by a professional. Do not try to open the case of the power bank and try to repair it yourself, as it will void a valid warranty. 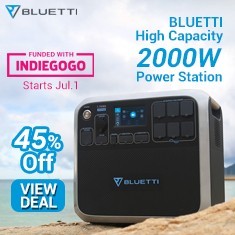