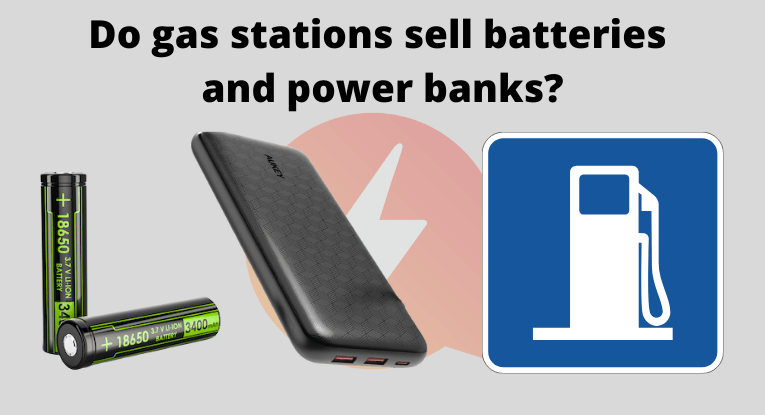 Because of the scope of the matter and many battery types available in a variety of form factors, we must divide the subject in order to answer these questions correctly. For example, there are cylindrical batteries like AA and AAA, as well as higher-power batteries such as 9volt, lithium-ion, and even car batteries.

When shopping at gas stations, it’s important to know that not all of them sell the same stuff and offer the same service. For instance, some gas stations just sell drinks in addition to fuel, while others are referred to as service stations due to the type of service they provide to drivers and motorists.  Additionally, some gas stations include convenience stores as well. Therefore, even though you may see a gas station sign alongside the road, it is not guaranteed to offer your specific item.

Cylindrical batteries such as non-rechargeable AA and AAA power most of the electronic equipment we use in an emergency, including flashlights. Due to the fact that these devices are considered necessities, AA and AAA batteries are available for purchase in gas stations. Hence, it is safe to say that gas stations are likely to stock a wide selection of commonly used batteries.

Another important point to keep in mind is that convenience stores often charge significantly higher prices than regular stores or supermarkets because they purchase smaller quantities of products from wholesalers at higher per-unit pricing.

Car batteries are not widely available in most stores unless you explicitly seek them out in an auto part or hardware store. Outside of cities, however, select service stations and convenience stores sell them, as it is conceivable for travelers’ cars to fail while on the road. In addition, most service stations have partnerships with auto parts stores, and they will place an order for you and have it delivered.

Power banks are not sold in gas stations or service stations. Aside from that, although convenience stores have a section dedicated to electronic devices, power banks may or may not be available there. Thus, make sure to bring your power bank with you on the road trip.

Why aren’t batteries and power banks sold at most gas stations?

Because of the low demand for batteries, most gas stations do not sell them other than the commonly used non-rechargeable AA and AAA batteries. If you’ve ever looked at what people buy at gas stations, service stations, and convenience stores in gas stations, you’ll notice that it’s all food.  Not to mention that most of their profits are made from snacks and beverages rather than batteries. As a result, they choose to stock items that are in great demand. That’s why car batteries, power banks, and any other infrequently purchased equipment are not offered at these locations. On the other hand, most essential items are readily available.

Moreover, if you’ve seen a selection of batteries in gas stations, service stations, or convenience stores, it’s because there’s an exception to the rule. When it comes to stores located outside of cities, they stock a range of batteries because there are no local hardware or auto parts stores. Why? This is due to an increase in demand for batteries in areas lacking hardware and car parts retailers.

Furthermore, batteries, particularly car batteries, take up more space, and gas stations do not have enough space to store them. Also, Business owners need to keep an eye on car batteries, especially if they’ve been kept in storage, which is why they decide not to sell them.

Since batteries are available in a range of forms and sizes, you can expect to find them only in auto parts and hardware stores. Aside from that, because gas stations have little space, they tend to stock just the most essential items. On the other hand, non-rechargeable AA and AAA batteries are considered essential items since they are used in most emergency equipment. That is why, in comparison to other types of batteries, you can expect to find non-rechargeable AA and AAA batteries at gas stations and convenience stores.

Unfortunately, if you’re looking for a certain type of battery, such as rechargeable batteries, you’ll be disappointed because they are not available. However, if you happen to come across a convenience store, you have a better chance of finding these items on their shelves than you do at gas stations or service stations. On the other hand, power banks are rarely sold at all three of these places. This is why we recommend that you check your packing list twice before leaving on your road trip.