Although it’s not a common occurrence, power banks do swell or bloat from time to time. When this happens, they need to be treated with extra care as they’re in an unstable state. Swollen power banks should also be looked at as potential threats as if they deteriorate further, they can cause fires. 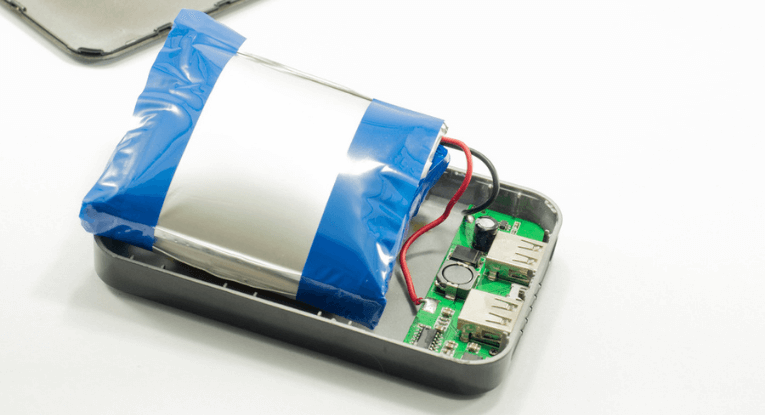 Why do power banks get swollen?

Power banks are basically Li-ion batteries with some circuitry, cased in a plastic or metal shell. So they’re predisposed to all shortcomings of Li-ion batteries in general. One of these is the fact that under some circumstances, Li-on batteries expand in volume, thus appearing bulkier.

This swelling happens due to an excess of current in the battery, which causes extra heat, which in turn causes gases from within the battery to expand their volume and thus to expand the battery itself. As a result, the power bank becomes unstable, sometimes completely unusable, and in extreme cases, it might catch on fire or even explode.

There are multiple reasons for the current buildup that leads to the gas expansion within the power bank’s battery. For example, overcharging, overcurrent or poor build quality can be determining factors that lead to a bloated power bank. This is why it’s always a good idea to purchase power banks from reputable brands that offer safety measures such as overcharge protection.

In some rare cases, the swelling doesn’t have an apparent reason. Batteries can pillow up by themselves even if left idle for long periods of time, without being subjected to overcharging, overdischarging, extreme temperatures, etc. This is why it’s always a good idea to simply check your power banks from time to time, especially if they’re not used on a current basis. 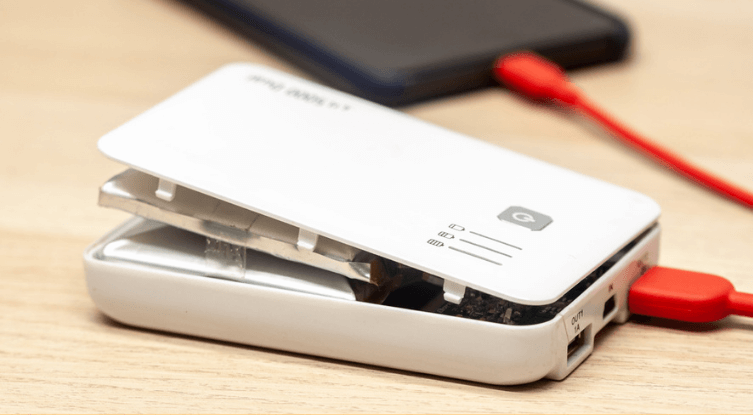 Sometimes the bloating effect is immediately visible, but other times it’s quite subtle and you need to look carefully in order to observe it. Here are some of the most common signs that the battery within the portable charger has started to swell:

Can you fix a swollen power bank?

The swelling process in a battery is not reversible. So once it gets to this point there no way to get it back to its original state. However, swollen power banks can theoretically be fixed, but the process requires replacing the bloated battery altogether. In some cases, this unfortunately might prove to be more expensive than purchasing a new device.

What to do with a swollen power bank

First of all, if you’re not an electrician, do not attempt to open or fix the power bank yourself. Avoid using the power bank anymore for charging any of your devices. Do not put any type of pressure on the device and don’t store it in cramped and closed-in places. Lastly, do not expose the power bank to high temperatures.

If you want to fix the device it’s best to take it to a local electronics repair shop and have them take a look at it. If they can find a compatible battery, they’ll be able to replace it for you. But if that’s not the case, your only safe alternative would be to safely dispose of your portable charger.

Power banks are recyclable items, so never toss them out in general trash. In fact, the chemicals that go into the composition of the batteries are very toxic to the environment. The only responsible solution is to discard them in dedicated electronics collection bins. Key elements recovered from the recycling process include Co, Ni, Cu, Li, and Al. Among all, cathodes are the most valuable material recovered from recycling.

How to prevent a power bank from becoming swollen

In order to prevent bloating and swelling, some general good-practice actions need to be considered:

When it comes to charging power banks, they should not be charged at ambient temperatures lower than 0 degrees centigrade or higher than 45-50 degrees centigrade. Charging at a high temperature decreases the life cycle and poses a safety hazard for the user. However, charging at low temperature can cause the growth in Lithium metal dendrites consequently causing an internal short circuit followed by the destruction of the battery and potentially triggering a fire.

Storage guidelines for power banks require it to be stored at or around room temperature (250C) at 20–40 0 C state of charging. They have a very low self-discharge rate so they can be stored for long periods of time with minimal charge loss. Most manufacturers also implement a minimal charging cut-off limit in order to keep power banks in a partially discharged state with enough current reserve so that they do not over-discharge.

Storing power banks at high temperatures or while it is fully charged should be avoided as it will place stress on the cell, decrease battery life and increase the risk of explosion in case of an accident.

Swollen power banks should be a factor of concern for any user. Although they don’t present an immediate risk, they should be considered as potentially dangerous devices. The best course of action is to either take them to a dedicated electronics prepare shop or to dispose of them in a responsible manner. Like in many other cases, implementing some simple good practices will prevent almost all power banks from ever reaching the bloated stage.