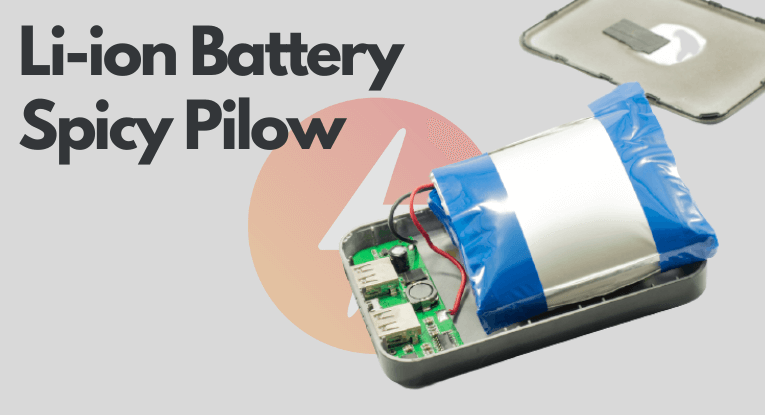 Swelling is one of the most common issues with lithium-ion batteries. They resemble a pillow as they expand, which is why they’ve earned the nicknames spicy pillow or forbidden pillow. If you’ve ever had a spicy pillow, you already know how cute they look and how tempting they are to touch, but you need to be cautious and avoid puncturing them as they are extremely dangerous.

Why do batteries expand and create the pillow shape?

Overcharging is a common cause of battery swelling. In this scenario, overcharge increases parasitic processes between the electrodes and electrolytes, resulting in the release of heat and gases. In addition, if the manufacturer utilizes substandard cells and designs them with low anode to cathode stoichiometric ratios or with particle contamination, you may soon notice battery problems. As a consequence, the battery pillow might get formed.

Most physical incidents can cause a battery to expand, regardless of whether the cell was damaged during manufacture or during product usage. In addition, temperature changes can have a detrimental effect on the performance of lithium batteries. If a device’s battery is regularly exposed to extremely high or extremely low temperatures, the battery’s capacity will degrade and finally bulge.

A deep discharge is another common cause of battery bloating. This issue is particularly prevalent with gadgets that consumers use only a few times over an extended period of time, such as drones, and then leave them discharged in their box. Remember, any factor that raises a battery’s self-discharge rate is detrimental and causes your battery to degrade more quickly.

Most notably, Canadian Light Source (CLS) synchrotron scientists published their findings in the Journal of the Electrochemical Society after studying an overworked battery. They depleted a battery to a point where its voltage fell below a crucial level.  The CLS team utilized computed tomography, an x-ray method, to observe what happens within the battery when it expands.

Toby Bond, a researcher at CLS, explained that lithium-ion batteries are typically wrapped in a spiraling “Swiss roll” or “jelly roll” design to fit as many energy-producing layers as feasible, this configuration might cause issues if gas develops inside.

Gas can accumulate in a battery if it is overheated or overcharged or if it is left depleted of charge for an extended period of time. Under these circumstances, the battery’s liquid components vaporize and create gas. This causes the casing to bulge, resulting in a pillow shape.

Bond added: “The battery can either pillow a small amount and keep operating, pillow a lot and cease operation or keep generating gas and rupture the cell, which can be accompanied by an explosion or fire”.  Later, he emphasized that the major reason for the swollen battery is overheating: “Avoid spending many uninterrupted hours playing 3D games on your phone and consider giving your tablet a break if you’ve been binge-watching movies for a nine-hour flight,” he says.

Portable electronic gadgets, such as cellphones, laptops, and portable power banks, are more susceptible to the spicy pillow risk than other types of electronics. The reason for these gadgets’ bloated batteries is that they are frequently used, resulting in an increased number of charge and discharge cycles in a short period of time. This continuous use either causes the battery to die or requires the user to charge it to 100% every time in order to have a battery for a day or two, resulting in the battery bulging.

Yes. The gas trapped inside the battery is extremely hazardous due to its toxicity and flammability. If you have a gadget with a bloated battery, avoid charging it since there is a strong possibility that the battery may catch fire or possibly explode.

If the battery is detachable, try to remove it; if not, take it to an electronic repair shop. If the battery is detachable but difficult to remove due to swelling, refrain from removing it to avoid puncture and explosion. To prevent any mishaps when carrying the item to an electrical repair shop, place it in a non-flammable container. You should also recycle any old batteries that you remove from devices.

Keep in mind that even if the battery is slightly enlarged, replace it, especially if you are traveling by plane. Airlines have restrictive rules about battery-powered gadgets. They often inspect the devices before passenger onboarding to ensure they operate properly and show no signs of bulging. Even if your gadget does not switch on, they will prohibit you from onboarding because they believe it is damaged.

Moreover, some manufacturers have a few products with defective batteries due to manufacturing issues; however, consumers are asked to return them for a replacement. All airlines have prohibited passengers from bringing these devices to the flight in checked or carry-on luggage.

The reason for these limits is self-evident: batteries are extremely hazardous. Since batteries have become a major safety concern, the Federal Aviation Administration (FAA) started recording battery-related incidents in 2006. According to the report, passenger planes had the most incidents: 187 (64%) out of 289. Check out the data in a visual format here.

On the other hand, cargo planes experienced just 77 battery-related incidents. Additionally, the report indicated that there were between one to eight incidents between 2006 and 2014. However, a significant spike began in 2011, which is expected given the growing usage of battery-powered devices in recent years.

Can a bloated battery explode even if not plugged in?

Yes, even while not in use, a swollen battery might explode or catch fire. This is because the gas inside the battery generates an excessive amount of pressure, which eventually bursts. While the probability of the battery exploding on its own is small, any pressure or temperature changes increase the likelihood of exploding or igniting.

What happens if a swollen battery is popped?

If the bloated battery is punctured, the gas within will rapidly release, possibly starting a fire or exploding. Apart from being toxic and hazardous, the pressure release, flame, and explosion can cause serious injury if the device is nearby. Additionally, if the gadget is carried in a backpack, it is very certain to ignite and cause a fire, resulting in tragedies.

Furthermore, never attempt to puncture or press on a bloated battery, even out of curiosity, as this will result in an explosion. Apart from the safety risks, you will almost certainly lose the device if something happens.

How to prevent batteries to become swollen

The most common cause of swollen batteries is overcharging. As a result, overnight charging is not suggested in order to prevent battery damage. While batteries, chargers, and battery-powered devices all have intelligent circuitry that regulates the charging process.

Yet, we still see battery damage caused by overcharging since it is still possible to overcharge a battery due to the market flooded with low-quality electronics with defective intelligent circuits. As a result, we recommend that you purchase products from reputable brands rather than inexpensive, low-quality alternatives, since they are equipped with overcharging protection.

Over discharging can result in battery damage, particularly if the battery is left depleted for an extended period of time. In this situation, the battery initially loses capacity and then begins to expand. To avoid the battery swelling due to over-discharge, use the gadget at least once a week and charge it to about 85%.

Dropping your device or any other physical damage to it may result in battery swelling. Therefore, check for damages such as shell cracks, whether it’s a cellphone, a power bank, or another item. Also, after a day or two, recheck the device to confirm it hasn’t swelled, as the battery may bloat later.

As previously mentioned, lithium batteries are temperature sensitive. Hence, to avoid decreasing the battery’s life and causing it to swell, you should never use or put it in a hot environment. For example, avoid using a power bank in direct sunlight on a beach during the summer.

While a bulging battery may suggest poor charging and incorrect use, it may also indicate that the battery is reaching the end of its life. Lithium-ion batteries have a life expectancy of around 500 charges and discharges; after this point, the batteries begin to swell. However, it is worth mentioning that some recycled and low-quality batteries have a lifespan of fewer than 500 charges.