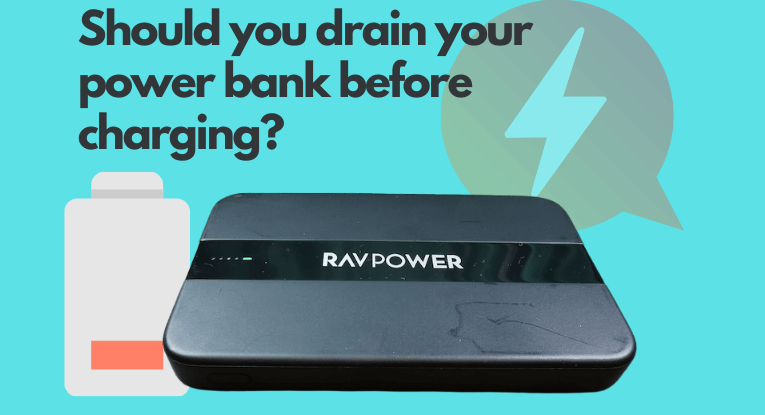 Should you drain your power bank before charging?

In general, draining a mobile device’s battery is one way to shorten its lifespan. Some people are unaware, while others are aware but assume it does not apply to power banks. It does, however, apply to it. This is easy to overlook about a power bank because it’s a power source.

Your power bank requires as much care and maintenance as your other mobile devices. This is because it is made with the same battery types as mobile phones: Lithium-ion (Li-on) and Lithium-polymer. Of the two, Lithium-ion (Li-on) is the most commonly used.

What exactly does it mean to drain your power bank?

To drain a power bank means letting it get down to as low as 1 percent to 0 percent before recharging. Some people would wonder, “what’s the point of a power bank if we can’t use all the power it has to give?” Well, it’s understandable why you would ask this. However, the purpose of a power bank is to provide you with backup support when you NEED it. It is not the main power supply, and you should not treat it as such.

Using up all of the charges in your power bank before charging will only set it up for early damage. You can charge your power bank when it’s 20%, 50%, or even 80%. The minimum should be 10% at least.

Why Lithium-ion batteries should not be fully drained

Li-ion batteries are most preferred in the power bank industry because they are the most stable. They are reliable, and maintaining them is not complicated. They will serve you very well if you take good care of a Li-on-based battery. One of the main ways to keep your Li-on battery going for long is to NEVER drain them completely before charging.

The concept of fully draining batteries before charging is only meant for rechargeable batteries. Good examples of such are Nickel-cadmium and Nickel-metal hydride. These batteries have a “memory effect.”

The battery memory effect affects the lifespan of a rechargeable battery’s charge due to incomplete discharge in the previous usage. If you do not discharge them entirely and regularly, they will not be able to retain enough power. However, mobile devices such as power banks are made with Lithium-ion. So, this does not apply to power banks.

In a Lithium-ion battery, there are two layers: Cathode and Anode. Each layer has its particles, but the most commonly used Cathode particle is Lithium cobalt oxide, and the Anode, is Graphite.

Lithium-ion is extracted from the two particles, whether the battery is charging or discharging. Now, the issue is that the battery gets weaker each time it undergoes such a transformation. However, the further down it goes, the more significant the impact, and the weaker your battery gets. So, the more you recharge the power bank from a lower level, the shorter its lifespan becomes.

Therefore, it is bad to let your power bank get to as low as 10 percent before charging.

Is it right to discharge a new power bank to 0%?

Also, remember before the new power bank gets to you, it has already been charged and tested. So, you are definitely not the first person to charge it.

In fact, power banks can never be fully drained. Before they reach 0% charge, they automatically stop providing power to other devices. However, they still retain some charge to avoid the battery being damaged. Also, the remaining charge will power the LED light, indicating that the power bank is empty.

It is not advisable to drain your power bank before charging it. This will weaken it over time, decreasing its life lifespan.

It is preferable to charge your power bank from 50% whenever possible. However, in most cases, we recommend charging it from at least 20%.