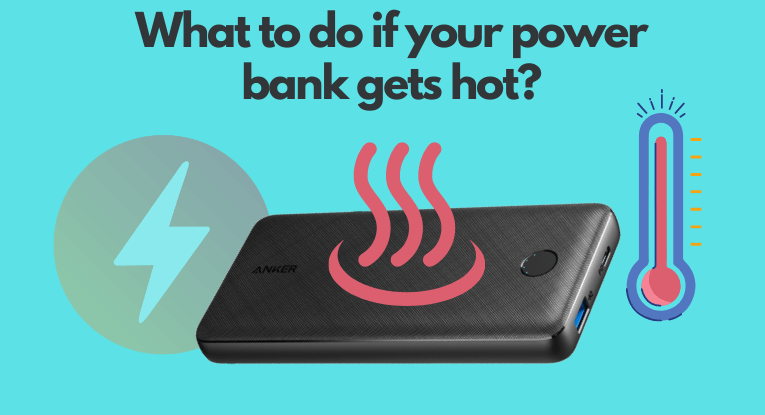 Every electrical device creates heat to some degree, and power banks are no exception. This article will explore what causes power banks to overheat, whether or not this is a common occurrence, and how to keep them from overheating in the first place. So, without further ado, let’s get started.

What causes a power bank to overheat

There are a variety of reasons that might lead to a power bank overheating. Examples include overheating caused by a manufacturing defect, incorrect charging habits, or short-circuiting due to the degradation of the power bank. Alternatively, if this is the case with your power bank, you should consider obtaining a replacement and properly disposing of your old one. Keep in mind that just because a power bank overheats, it does not always indicate that there is an issue with the item.

A malfunctioning charger, for example, might cause the power bank to overheat while being recharged. Therefore, check that the charger is working correctly before purchasing a new power bank and shelling out a considerable amount of money on a new power bank. Also, be aware that using low-cost third-party chargers, particularly ones from unknown companies, can cause damage to power banks, as well as overheating and malfunctioning.

Pass-through charging is another common factor that can lead to a portable charger overheating. For those who don’t know, pass-through charging allows you to charge devices while also recharging the power bank at the same time, saving time when there is only one accessible wall outlet.

Another cause for a power bank to get overheated is when fast-charging technologies are utilized. Because these technologies are capable of high power output and input, they create significantly more heat than conventional charging methods.

On top of that, physical damage to the circuits and batteries might cause the power bank to overheat throughout each charge and discharge cycle. Hence, soon after impact, check the power bank for signs of cracking. Quickly replace the power bank if there is any indication that it has been damaged or is acting oddly due to the incident.

Is it normal for a power bank to get hot?

There will always be certain losses in any system that utilizes batteries and electronics, and those losses will be released as heat. It is important to understand that the circuit that converts the battery voltage (3.7V nominal) to 5V runs at or near its design limit, causing the USB charging circuit and the battery to become hot.

Consequently, it is common for a power bank to become slightly heated as a result of this. However, the created heat is reasonable to a certain degree.  If you are unable to hold the power bank in your hands comfortably, it is considered to be overheated.

Bear in mind that an overheated power bank is highly hazardous to your health because of the lithium chemistry used to manufacture the batteries. If a battery is left to overheat for a lengthy period of time, it is more likely to catch fire or even explode. Therefore, despite the fact that power banks and batteries are now equipped with safety features, you should take precautions to avoid even the slightest chance of a disaster.

In addition, it’s important to note that the market is currently swamped with low-cost power banks from unknown brands, which are more prone to overheating as a consequence of the manufacturer’s attempt to compete with recognized brands by cutting manufacturing costs. To do this, they either ignore safety protection circuits or utilize cheaper ones that frequently fail and cause power banks to overcharge and overheat as a result of their malfunction.

What to do in case your power bank gets hot

Although we strongly advise against charging any device in direct sunlight, if you absolutely must, ensure that the charging process is interrupted as soon as you notice overheating. Then, move the device to a cool environment to rest. Once the power bank and the connected device have reached room temperature, you may test to see whether the problem persists by charging the device or power bank.

How to prevent power bank overheating

Avoid placing the power banks near any metal objects to prevent them from overheating due to a short circuit. Although power banks and batteries inside them are equipped with Smart-IC to protect against these sorts of threats, it is recommended to prevent these types of scenarios completely by being more cautious in the first place.

Moreover, because power banks generate heat when charging or recharging a device, it is suggested that you avoid charging the power bank or another device in hot environments, such as direct sunlight inside the car. Similar to this, avoid covering the power bank with something like a blanket since it will become overheated due to insufficient airflow.

We also advise that you stop using the pass-through charging and charge the devices separately if you experience excessive heat when utilizing this feature.

Furthermore, power banks can overheat when used with cheap third-party chargers, as previously mentioned. Thus, the best solution is to use the charger that came with the power bank or purchase a charger from an established and reliable brand.

It’s worth noting that you should purchase power banks from well-known companies since these manufacturers have been around for a long time. Also, because they are aware of the dangers associated with lithium batteries, they have subjected their product to several testing to ensure its safety.