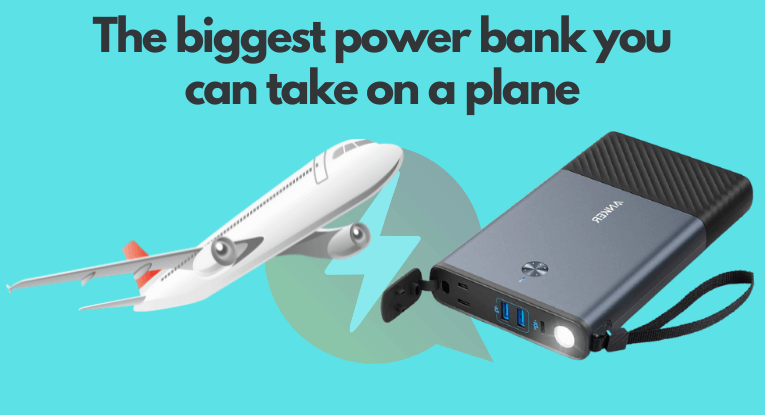 Power banks are basically batteries that you can use to charge up your devices. However, there are limits regarding the number and capacity of such devices onboard due to flight safety regulations. This article answers some of the frequently asked questions about carrying power banks on an airplane.

What is the maximum capacity allowed on a plane?

The Federal Aviation Administration (FAA) does not allow passengers to have power banks and lithium-ion batteries in their checked bags which are stored in the cargo area of the aircraft. However, passengers are permitted to board such devices in their carry-on luggage. The reason is that possible fires are easier to contain and extinguish in the cabin than in the cargo area.

The maximum battery capacity varies depending on the airline you’re flying with. Most commercial flights allow power banks with up to 27000mAh or 100Wh. In some cases, you need the operator’s approval to bring power banks with more than 100Wh but no more than 160Wh. Still, some airlines allow up to 160Wh batteries or power banks. Note that you cannot carry the power bank onboard if the capacity exceeds 160Wh (43200 mAh).

How many power banks are you allowed to bring on a plane?

For the power banks under 100Wh, there are no specific instructions pertaining to the number of batteries you can take on board. However, for power banks of between 100Wh and 160Wh, there is a general limit of two such devices per person.

If you want to carry more than one power bank with a capacity of more than 100Wh, you should check with the airline. For example, most American airlines allow up to two batteries within limits. However, British Airways allows up to four batteries.

Can you use a power bank during the flight?

The general regulations regarding electronic devices during flights have firmly prohibited using any radio-emitting devices during flights. Since a short circuit in a battery can cause sparks and potential ignition, most flights would not allow using power banks. Instead, you can charge your devices using the ports on the backseats. Most commercial airplanes are now equipped with charging ports.

However, pay attention to the instructions given by the flight hosts at the beginning of your flight. Follow their specific instructions, but ask them before using the device if they don’t mention power banks. After all, safety comes first, and using a power bank might jeopardize flight safety.

Other things you should know before flying with a power bank

Why can’t passengers put their power banks in checked luggage?

Lithium-ion batteries are used in most tech gadgets due to their high capacity within a limited volume. However, the trade-off is that the high-density battery cells are prone to releasing flammable gases. The gases might ignite or even explode in high temperatures or in the event of a spark. Since there is limited access to the cargo area, the fire would have a devastating toll on the aircraft. That’s why you are not allowed to put lithium-ion batteries in the luggage space.

Have power banks or batteries ever caused aircraft accidents?

The IATA has reported three counts of accidents on account of batteries. In all cases, the lithium-ion batteries were loaded in the cargo area. The planes had to perform emergency landings in all incidents, and two of the accidents sustained casualties. In addition, the battery explosions had spread fire in the cargo area, creating black smoke and forcing the pilots to ditch the airplane.

Similar to power banks, laptops and hoverboards have big batteries. However, you can put your laptop in your checked luggage. On the other hand, airlines are more cautious about hoverboards. Some airlines ban hoverboards, while others require passengers to separate the battery and carry it on board. Therefore, if you want to bring both your power bank and hoverboard, you might run into trouble with the airline.