The chances of a power bank to explode are very slim, but unfortunately, there have been recorded cases of exploding power banks. As such, a growing number of people are expressing concern for their safety, thanks in part to reports on the news and social media about portable chargers catching fire or exploding.

These rare occurrences generally happen in cases of extremely poor built quality or improper use. However, there’s still so much necessary confusion and fear around this subject. Therefore, let’s explore the topic in this post and fully explain the exact reasons that lead to exploding power banks and how to avoid it in the first place.

If you’re shaking your head in disbelief at the claims of power banks exploding and catching fire, make sure to watch the next two videos. Both of them show two different persons whose power banks exploded while in their backpacks.

While in the first video the incident happened on a bus, what’s really interesting in the last video is the fact that it took place at a Thai airport. Thus, had this happened in an airplane cargo or the cabin, the consequences could have been devastating.

Due to the explosion hazard of Li batteries in general, airlines don’t allow them in their cargo areas. Additionally, they have strict limits when it comes to checked-in batteries, which are usually under 100Wh capacity and a maximum of two batteries per passenger. For more on the rules and regulations of taking portable chargers on planes see our dedicated article on the subject.

Besides the videos above, there are also reports of power banks exploding in pockets, purses, or cars. For example, in the case of cars, leaving a charging power bank on your dashboard during a hot summer day is a recipe for disaster, such as in this example from Sept 2020.

Exploding power banks are also known to cause fires such as in this reported case. According to the New Haven Register, Li-ion batteries have caused an estimated 200 fires between 2009 and 2017 in the US alone.

How do Li-ion batteries explode?

The vast majority of power banks are built using Li-ion batteries. According to Sony, one of the most renowned Li-ion cell manufacturers, the reason why power banks and Li batteries in general explode might occasionally be due to atomic metal particles inside the battery cell that might interact with other parts of the cell. This might be caused either by a flaw in its design or by external stress (temperature, impact, vibration).

When microscopic metal particles concentrate on a single location, an internal mild short circuit develops in the cell, leading to elevated self-discharge. In turn, a current path is produced between the electrodes of the cell, which is why the temperature rises and weakens the insulation layer. At this point, the electrical short occurs, and so the cell catches fire or explodes if the temperature accelerates rapidly, a process that is called “rapid disassembly”.

3 common reasons why power banks can blow up

Now that we know the electrochemical reaction that takes place inside battery cells, and leads to fires, let’s examine the reasons that might trigger it. In many cases, this happens due to at least one of the following reasons:

Like any other electronic gadget, power banks must meet certain quality standards to be deemed safe. A certified power bank has its circuits insulated to prevent short circuits, as well as equipped with temperature control, overvoltage control, and power protection, which ensures it will stop charging once it’s full. Should a power bank not have any of these features, the likelihood of an explosion increases.

The majority of power banks on the market are equipped with Lithium-ion or Lithium-Polymer batteries, which are the most expensive component. Thus, in an attempt to reduce costs, brands tend to buy cheaper or even recycled batteries, which are not necessarily of the best quality. Besides the fact that power banks are unlikely to supply the claimed capacity, the real problem lies in the risk these pose to the user’s safety.

Most users are careful of their power banks and avoid leaving them exposed to harsh conditions, such as high temperature or humidity. Then others are negligent and leave their power banks in the car (charging or not) during high heat, in confined and humid spaces, or the most common one, charging all night long. Obviously, all these practices can start a fire, especially if the power bank does not have a multiprotection system, so they must be avoided as much as possible.

Other minor factors that can lead to explosion or deterioration of the battery cell include:

Tell-tale signs of a possible explosion

Here are the main signs of a power bank which is about to explode or catch on fire:

If you see any of these signs, make sure to immediately disconnect the power bank from any device and/or power source. Then, with great care, move the device outside, in a large open space. If at any time you see flames or sparks, just drop it and get away from it as fast as possible.

How to put out a power bank that caught fire?

If your power bank ignites, then the first thing to do is make sure that there are no immediate dangers around. Quickly remove any flammable objects and then proceed to put the fire out, while making sure that you are safe. Ideally, you’d use a fire extinguisher to do so. For more information on how to put out a Li-ion battery fire, check out this great resource from Battery University.

As always, it’s better to be safe than sorry, so in order to avoid any power bank incidents, please follow these best-practice measures:

How to buy a safe power bank?

The first thing that we can recommend is that you should only buy power banks from brands and manufacturers with an excellent reputation. Usually, these tend to be a little bit more expensive than other alternatives from lesser-known brands, but they make up in build quality.

Saving a few dollars on the upfront purchase can save you thousands, if not more, by simply avoiding such accidents to take place. Furthermore, it’s not at all uncommon that power banks that seem too good to be true in terms of price compared to their capacity are actually fake. We discussed this issue in our previous article where we discussed how almost all 100000mAh power banks are fakes.

Besides getting a device from a reputable brand, you should also make sure that your future power bank has multiprotection systems. In this sense, here at Power Bank Expert, when we review power banks we always make sure to specify which device comes with these safety features, so you must always look for them. Some of these features include:

When browsing through our power bank reviews, you can easily see which device has such features by glancing over the feature box. 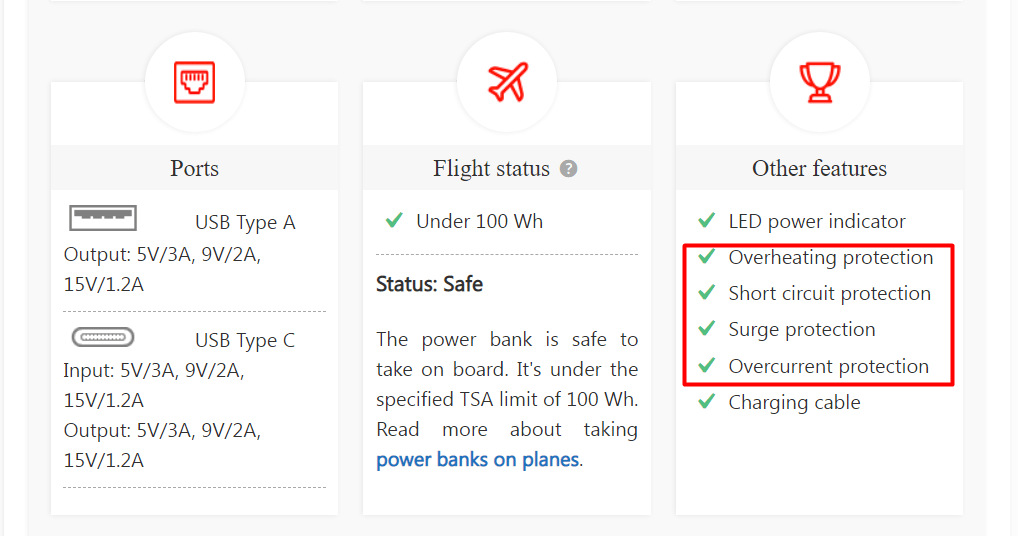 Thus, the smartest thing to do is to invest in a quality power bank in order to protect yourself and your devices from possible damage.

Contrary to alarmist media reports, power banks are not dangerous. Otherwise, there would be a bigger number of reported cases of damage and personal injury, and subsequently, more complaints from customers. Nevertheless, they carry internal batteries, which, like any other battery, can explode and catch fire due to poor quality design or when exposed to specific conditions.

For this reason, it’s important to stick to power banks from reputable brands as these meet the highest safety standards, such as UL certification, ensuring their products have been tested properly. Besides, as users, it’s important to take the time to read the product manuals since most of them contain essential information on how to manipulate them, which can help us prevent accidents.