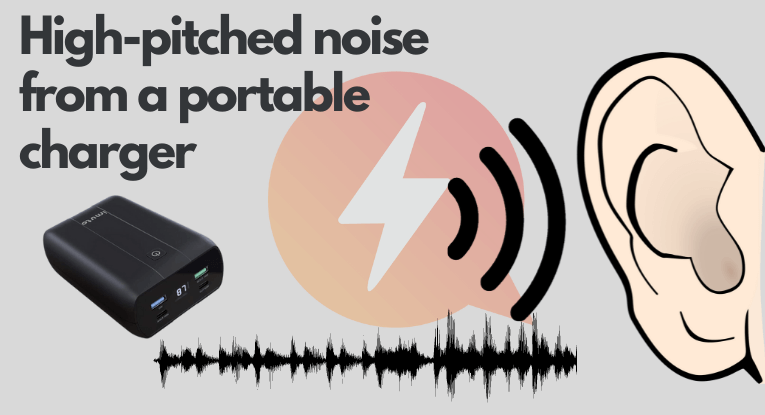 The high-pitched noise produced by your portable charger is referred to as “coil whine,” and it is most evident on older televisions. Nevertheless, electrical noises are very common and are basically vibrations generated by electrical current flowing through internal components. However, in some cases, this may indicate a malfunctioning portable charger.

What is that high-pitched noise?

The range of frequencies that the human ear can process is just about 20Hz to 20,000Hz. In some cases, humans can hear high-pitched noise from an adapter when the AC power is converted to DC power.

These chargers utilize an electromagnetic coil as a transformer rather than an inductor. As a result, the lower voltage power is converted to DC in a diode bridge rectifier. Next, power passes through the capacitor before being transmitted via the power cable. Each step of the process generates some noise.

However, when you hear a high-pitched noise, it’s likely coming from a transformer, which generates noise when electricity flows into the coil. This causes the component to vibrate, generating a resonance frequency in the process.

Additionally, switch circuits are capable of generating high-frequency noises such as a ticking sound, which can be inconvenient as well.

Is there a way to stop it?

While there are several ways for soundproofing a portable charger, but it is not recommended. Soundproofing can cause the charger to overheat, damaging the charger or possibly causing it to catch fire. However, remember that some noises are normal while others are not, and if you can find the source of the noise, you may be able to stop it.

Examine the charger and cable for any damage

First, unplug the charger from the wall outlet. It is advised not to inspect it before unplugging since you risk becoming electrified if there is a problem. Following that, check the charger for signs of damage, such as case cracking. If the charger has a problem, such as a damaged case, it is possible that it fell from a height, damaging the inside components.

If this is the case, you will need to replace the charger or take it to a repair shop. Additionally, if the charger’s cable is damaged, replace it. However, if everything is in order, proceed to the next step.

Often, the issue is with the outlet rather than the charger. To confirm this, connect the charger to an outlet in another room. If the noise stops, there is nothing wrong with the charger; if it persists, you will need to purchase a new one. It’s worth mentioning that the noise could be coming from the outlet rather than the charger. Unplug the charger and move closer to the outlet to determine whether it is buzzing or not. If this is the case, you should contact a local electrician immediately since your house is in danger of catching fire or being electrocuted.

A short circuit occurs when a current passes through an unintended electrical line, and the results can be disastrous. Remember, a fire could break out due to an electrical leak caused by a short circuit.  This is why it’s important to get high-quality portable chargers that come with safety features such as short circuit protection.

Due to their high heat generation and need for cooling, nearly all new wireless chargers are equipped with a fan. So if you notice a high-pitched noise when using a wireless charger, it might be the fan. To get rid of the noise, you’ll need to use a wired charger.

If your charger is more than a year or two old and you didn’t notice any buzzing when it was new, it’s time to replace it. This is because components such as a diode, capacitor, transformer, and rectifier have loosened after a few years of usage, resulting in odd noises. If this is the case for you, stop using the charger since it may cause damage to your devices.

If the charger you’re using is counterfeit or from an unknown brand, the high-pitched noise is almost certainly due to the charger’s low-quality components. By purchasing fake or low-quality items, you not only risk having the product fail prematurely but also risk damaging your gadgets. Thus, investing in products from reputable companies with a higher price tag is worthwhile since you will be able to use them for several years with no risk to your gadgets.

It depends. If the source of the high-pitched noise is the outlet or a short circuit, it is extremely dangerous since it can start a fire. But if the source of the sound is something more benign, then it’s definitely not dangerous, although it can be annoying!