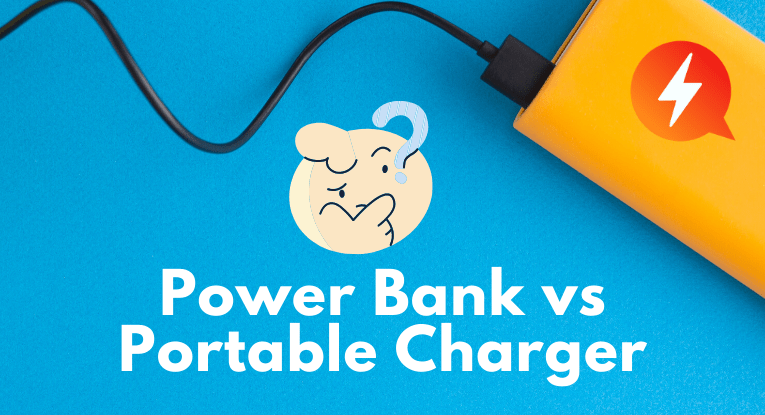 A question we see a lot is – what is the difference between a power bank and a portable charger? To put it simply both terms refer to the same class of devices and can generally be used interchangeably.

This is why they can spark confusion among consumers, especially for those that are unfamiliar with this specific market.

However, generally speaking, portable chargers can refer to a somewhat wider group of products. For example larger devices such as portable power generators or portable car battery chargers, which cannot be really called power banks. Power banks are generally more compact and lightweight.

So the main conclusion is that portable chargers can refer to a slightly wider group of products than power banks, but they can generally be used interchangeably.

What does the dictionary say?

Both terms are new in the English language and they have not yet been standardized. Most dictionaries don’t have any definition included for either of them. The only dictionary definition we were able to find, is in the Macmillan Dictionary and it refers to the term power bank: “a rechargeable portable device containing electricity that can be transferred to a phone“.

At first sight, this definition is very simplistic, as power banks can be used to transfer power to a wide array of devices, not only phones. For example, laptops, gaming consoles such as the Nintendo Switch, Bluetooth headphones, smartwatches, are all types of devices that could be charged using a power bank. But we digress…

At the time of writing this article, we weren’t able to find any other dictionaries that would provide a definition for either “power bank” or “portable charger”. But we suspect that in the coming years, as these terms become more widely used, they will be included in dictionaries as standalone terms.

Do you know any other dictionary that gives a definition for either of these two terms? Please let us know in the comments!

But which term is the most popular?

In order to gauge the popularity of each term, we can take a look at Google Trends which showcases the number of searches each term gets within a specific region.  As you can see from the image below, the term “power bank” is much more popular than “portable charger” worldwide:

But within the US, the gap is much smaller, both terms having almost equal popularity:

This can also be noticed in Google Trends as well:

This is why, on our site, we’re using the more popular spelling “power bank” instead of “powerbank”.

Besides the most common terms, there are many other variations and synonyms that people use to refer to the same class of products. Here are some examples:

However, these are much less popular than either “power bank” or “portable charger”.

In the end, because this class of devices is pretty new and does not yet have an established identity within the English language, we’ll see many different terms circle around for a while. But as things look like now, it’s very likely that in the future the term “power bank” will win the popularity race and so it will get to represent the official definition for the entire class of products.

Did you come across any similar term recently? Please let us know in the comments!