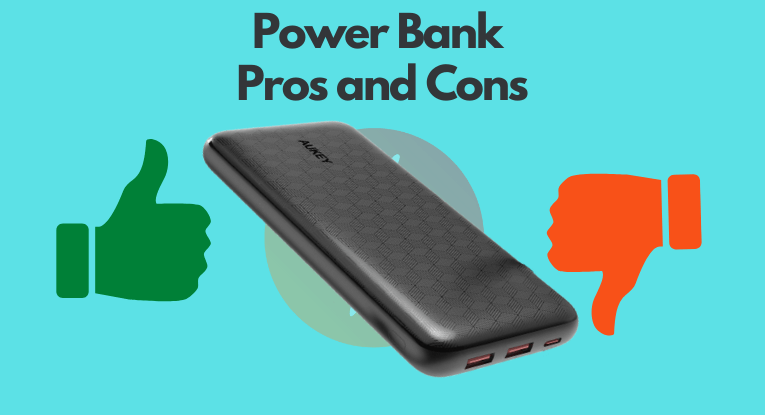 Like any other device, power banks have their own pros and cons which you should be aware of before making a purchase. In this article, we’ll explore the most important advantages and disadvantages from our experience of interacting with these products over the last years. So continue reading if you want to learn more before you purchase your first power bank!

They provide charge when you need it the most

Power banks are generally very useful devices. Their most important feature is the fact that they can provide your electronics, like a smartphone, tablet, etc., with power whenever the battery has depleted. Some power banks can even charge low-current USB-C gadgets, including Bluetooth earbuds, a smartwatch, etc. Even then, others can charge even more power-intensive products like a laptop or a gaming console such as the Nintendo Switch.

You can choose from multiple capacities according to your needs

Power banks generally come in many different capacities. These determine how much charge your power bank can store. A higher capacity will store more power, while a lower capacity stores a lower amount of energy. However, it’s important to note that a slight difference in capacity can determine if it can fully charge a smartphone.

For example, a 5000mAh power bank is sufficient to charge an S8 once, whereas a 3000mAh isn’t ideal. That’s because the S8 model has a 3000mAh battery. You can choose larger capacities like a 10000mAh, 15000mAh, 20000mAh battery, or higher. The higher capacity batteries tend to be more expensive, however.

Power banks are pretty affordable, costing anywhere between $5 and $100+. That price range depends on a few factors, such as brand, quality, capacity, technology, etc. You will also discover that the more expensive power banks are bundled with features developed by reputable brands and have a large battery capacity. On the other hand, the least expensive types are made of cheap materials, have low capacity, and limited technology.

But generally speaking, portable chargers cost only a fraction of what people usually pay for smartphones for example. For this reason, they’re usually regarded as more dispensable products than their higher-tech counterparts.

Most of them can charge several devices at once

One of the greatest advantages of owning a power bank is that it can charge multiple devices simultaneously. This is achieved with multiple output ports. Some will have two while others have 3 or 4. Even then, there are a few that have 5-6. However, you should be aware that some portable chargers don’t share the same output charging levels. So that may affect charging speeds for a connected device.

Having a power bank with multiple output ports means that you’ll be able to charge your phone and tablet at the same time. Or several phones in case you’re hanging around with your friends. Or maybe your phone and gaming console. The possibilities are endless, as they say!

Smaller capacity power banks, maybe up to 10000mAh, can usually fit in a trouser’s pocket. You can carry them around with you, without any discomfort. As the capacity gets bigger, so does the size of the portable charger. But even so, they can easily be carried in a small purse or a backpack.

Most people can walk around with a power bank all day and not even be aware of it. But in case the phone battery runs out, it’s right there when you need it the most.

They can come with an array of charging technologies

One of the biggest and commonly known advantages of a power bank is that it can support various charging technologies. However, your device, such as a smartphone,  must be compatible with the technology to benefit from the best charging speed. Some feature QC 4.0/3.0/2.0, while others come with PD 3.0/2.0 or other charging protocols designed by the brand. Some power banks even have multiple charging technologies, making them even more useful.

One extra thing to carry around and keep track of

Carrying a power bank around also adds to the number of items you will need to keep an eye on and track. This can be a disadvantage if you take a lot with you. Furthermore, given their generally small size, they can be quite easy to lose track of.

If you know yourself to be a forgetful or not organized person, then you can expect to buy several of them a year. This is why you should consider getting one of the cheaper models instead of investing in something more premium.

Their actual capacity is lower than stated

Many people are surprised to see that their new power bank does not recharge their phone as many times as they thought. That’s because the advertised capacity of a portable charger is actually larger than its usable capacity. We have explored this subject in-depth here.

So if you were to calculate the number of charges a power bank can provide for your phone, the best approach is to use just 75% of the advertised capacity.

According to the TSA restrictions, you cannot take a 100Wh power bank with you when boarding a flight. That’s because it poses a risk of catching fire or exploding while in the air due to high pressure. Power banks under 100Wh are ok to take on a flight with you, however. A 27000mAh battery is equivalent to 100Wh.

If you have a power bank rated between 101Wh and 160Wh, then you will need special permission to take it aboard on a flight. Power banks exceeding 160Wh are banned from the flight.

Their Li-ion batteries can be dangerous

Power banks are made of Li-ion cells, which are known for their chemical instability. This can generally be triggered by a short circuit, which could lead to overheating. Overcharging is another risk factor since it leads to heat build-up making the battery have a bloated shape, similar to a pillow. In extreme cases, these batteries can catch fire or even explode.

But in order to prevent these things from happening most portable chargers come with safety features such as short circuit, overcharge, and over-discharge safety mechanisms. But if you were to buy a knock-off brand for cheap, then you most like would get a device without any type of safety, which would put you at a higher risk.

It can take a while to recharge

Power bank charging times may vary, but those with larger capacities may take a lot longer. Of course, that depends on the technology the charger supports. For example, a 10000mAh power bank will take several hours to charge at standard speed (5V/1A) compared to one with PD 3.0, where it will only take a few hours.

But you should know that some of the top-of-the-line models can charge in as little as 18 minutes. However, you should expect to pay a premium price for these charging speeds.

Can cause a cluttered mess with cables

A power bank capable of simultaneously charging multiple devices can be somewhat problematic. That’s because it may tangle up each cable that’s already connected to the device. This can make it look unpleasant. At the same time, it can be difficult and time-consuming to untangle the mess, especially when you try to unplug the cable. Power banks with built-in cables are a much better option for this reason, even if they have a shorter length.

At the end of the day, you can’t go wrong with a power bank. While there are legitimate concerns as listed above, the pros far outweigh them. This is especially true now that technology is advancing throughout the years, making power banks more efficient and less problematic. Of course, that’s especially true for devices that may catch fire or explode. If you’re interested in purchasing a power bank, but don’t know where to start, then you should check out the buyer’s guide, which will provide you with useful information!