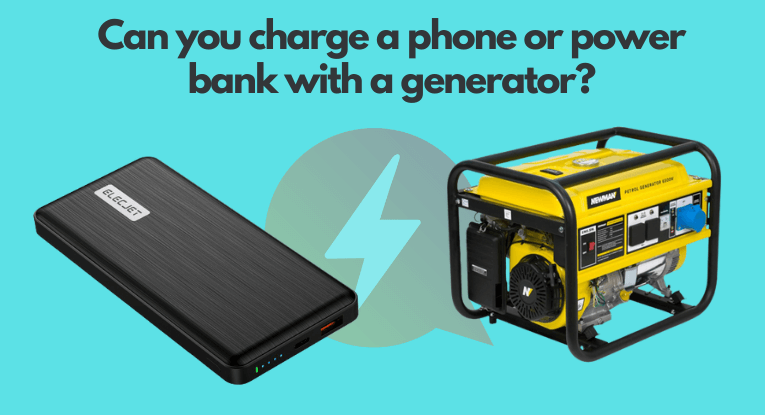 While the need for an electric generator is uncommon in urban areas, it can become crucial equipment during a power outage due to our all-too-human reliance on it. Therefore, whether you’re suffering more frequent blackouts or you’re planning to spend some time away from the frenzy of urban life in a remote cottage, you may need to charge your electronics using a generator. So, let us discuss if a generator can be used to charge your phone and power bank.

Generators come in various sizes and types, and each one is suited for a specific application. In general, this device is capable of generating enough electricity to run a whole house or even factories, ships, and other enormous machines. However, while we all know that using a generator to power high-power electronics is perfectly safe, we have concerns about sensitive electronics such as TVs, desktop computers, phones, and power banks.

Due to the fact that most portable generators provide unstable power, they are not suitable for sensitive electronics. Surges and voltage fluctuations have the potential to damage sensitive circuits, even more so if the generator runs out of fuel and stutters. As a result, we recommend inverter and standby generators for powering these devices due to their reliability in providing steady, high-quality electricity.

Additionally, it’s important to note that power must be regulated to charge power banks, phones safely. There are two scenarios to use a generator: either plug the device into the inverter generator’s outlet or connect the generator directly to the house’s inlet box before plugging the gadgets into the house’s wall socket.

Therefore, as long as the electricity is regulated, it makes no difference in the scenario you choose or what type of equipment generates the power. Apart from generators, chargers, phones, and power banks all have regulators to prevent possible damage. However, it is worth mentioning that these devices are capable of withstanding specific levels of surges and voltage fluctuations, which is why we recommended standby and inverter generators in the first place.

Keep in mind that while protections are in place to avoid power surges, the use of inverters and standby generators does not eliminate the possibility of small power surges. For instance, a tiny influx is all that is required to fry a device or a charging phone. As a result, we suggest that you utilize a surge protector to minimize the risk of damage to your devices and to ensure their safety.

Charging lithium batteries with a generator. Can it be done?

Yes, a generator can be used to charge lithium batteries. However, as previously mentioned, the power output of basic portable generators fluctuates. Therefore, as long as the generator is not used to charge the batteries on a regular basis, there is no reason to be concerned; otherwise, the battery charger’s circuits may be damaged.

But even if the charger gets fried, the batteries will remain safe. Furthermore, it is also possible to increase the quality of electricity supplied to equipment by using a line conditioner.

How long does it take to charge a phone or power bank using a generator?

In other words, harmonic distortion is reduced, which is why inverter generators are referred to as ‘clean power.’ The quality of energy generated by inverter generators is equivalent to that provided by your mains electrical supplier. Therefore, If the generator is unable to provide clean power, the charging speed will be reduced due to the fluctuations.

Is it safe to use a generator for charging batteries?

Charging batteries using a generator doesn’t put batteries at risk, and it is safe to charge them. However, the charger is at risk if you’re using a basic generator because the quality of the power is low and unstable. Although chargers are able to withstand this fluctuation in the current, if it is higher than the charger’s rated value, the charger will stop working, or in the worst scenario, it may fry.

Suppose you want to charge a phone or power bank using a basic generator. In that scenario, it is possible to damage the battery and the device; thus, it isn’t worth trying since these products are quite expensive. As a result, we suggest you use an inverter or standby generator. This is because these kinds of generators are able to produce high-quality electricity. Moreover, don’t forget to utilize a surge protector because there is a slight risk of damaging the gadget and its battery even while using clean power. Also, if the charger is counterfeit or from an unknown brand, the risk of damage increases.