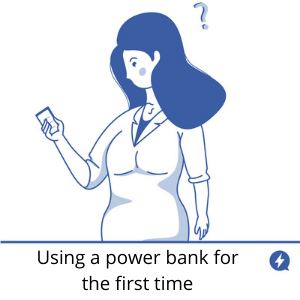 Using a power bank for the first time is a pretty straightforward thing. Sometimes you can simply take it out of the box and you’re ready to go. But generally, you should charge the power bank first before using it.

Power banks are quite simple devices so you don’t need to have any advanced setup procedures in order to start using them for the first time. Other types of products might require you to do specific actions such as fully discharging and recharging the device several times before using it. This is not the case with power banks.

Let’s go through some basic considerations you should be aware of when starting to use a new power bank for the first time.

Before using your new power bank, you should always read the user manual. Although the use of a power bank is simple and straightforward, this doesn’t mean you should ignore the manufacturer’s recommendations.

User manuals are targeted specifically to the device you are using. Even if some of the info you might find in the manual doesn’t overlap with what you’re about to read here, you should follow the manufacturer’s guidelines.

For example, in this user manual, RAVpower recommends fully charging the device before use:

However, on other user manuals for similar power banks, RAVpower does not make the same recommendation. So just be on the safe side, simply follow the instructions that come with your new power bank.

Yes, most power banks do come pre-charged. However, in most cases, it won’t be a full charge, but something around 75% or less. You’ll almost never buy a new power bank that is completely charged out of the box.

Of course, you could receive a completely empty power bank as well. That’s especially the case with devices that have been on the shelf for a long time before being sold. After a while power banks, just like any other battery, will start losing power until they completely deplete their charge. For more information on this topic, check out our previous article on how long does a power bank keeps its charge.

In order to assess the charging level, check how many LED lights are blinking when you press the power button. Most power banks have 4 LED lights that indicate the level of charging. Each of them stands for 25 percent power, on average. So if you see 3 out of 4 lights blinking, then the power bank is charged to around 75%.

However, some portable chargers come with LCD displays that showcase exactly how much charge it is left. Power banks with display screens are more accurate in this regard.

How to charge your portable charger for the first time

Note: “portable charger” and “power bank” are basically synonyms. The terms can be used interchangeably.

As a best practice, you should fully charge the power bank before using it for the first time, even if it has some charge out of the box. Almost all power banks come with a compatible charging cable that you can either plug in a wall socket or in other power sources such as a laptop’s USB port.

Please note that the majority of power banks do not come with a wall charger. Many people are not aware of this when they place the order and then get disappointed when they see that the package does not contain one. Furthermore, you should know that not all chargers are the same in terms of the power they can supply.

Some of them supply more power and thus can charge a power bank faster, while others are slower and they can add several hours to the charging time of your device. For a selection of fast wall chargers, see our article about the best chargers with QC 3.0 and 4.0.

If you don’t have a charger when you first get the power bank, you can simply charge it using the USB port from your laptop. Just be mindful that in this case, it will take a long time for the power bank to charge as USB ports from laptops have very low current outputs.

It’s important to avoid overcharging your power bank. This can be damaging to the battery in the long run. This is why after plugging it in, you should check the charge indicators from time to time. Some power banks, however, do come with overcharging protection so you don’t need to worry about it. Check your user manual to see if your portable charger has this feature or not.

Using the power bank for the very first time

After seeing all the four lights blink on your power bank, you know that the device is fully charged. What do you do next? Unplug it, obviously. Once you do that, you can use the power bank to charge your phone.

Usually, there is at least one USB port, but there are also devices that come with more than one outlet for discharging electricity, such as the Anker PowerCore 20100. It’s possible that not all output ports on your power bank deliver the same amount of power. You can get various output values such as 1A, 2A, 2.5A, etc. The higher the Amps the faster your devices will charge. So if you want a fast charge use the port with the highest output.

Some power banks also come with different fast charging technologies such as Power Delivery, Quick Charge or PowerIQ. These are great for delivering really fast charging times, but you should be aware that the device you’re trying to charge should also be compatible with the type of fast charge your power bank can provide. Otherwise, fast charging won’t work and the device will get a regular charge.

You can also use power banks to charge laptops. But in this case, the power output should be big enough in order to meet the laptop’s power needs. If you’re looking to read more into this subject, we have made a selection of power banks that can charge laptops.

Most manufacturers advise utilizing the USB cable (and wall charger) that originally came with your power bank. However, cables and wall chargers have very wide compatibilities so you should be able to use basically any type of cable or charger, provided that they have a quality built. Using cheap and/or poorly made cables and chargers will result in slow-charging times and might even cause damage to your power bank.

You should know that a power bank with an empty battery will take a while until it is fully charged. The quickest charging power banks take 2-3 hours such as the RAVPower 20000mAh 60W power bank, while others may take as long as 8 to 10 hours. If this is an important factor to you, make sure you know this information before placing your order.

In case your power bank doesn’t work properly, check out our troubleshooting guide for when the lights are blinking but the power bank is not charging.

A power bank is a long-term investment, especially if you travel a lot. It will definitely make your life simpler allowing you to charge your portable devices on the go. As you can see, using it is quite straightforward and easy. Let us know in the comments if you have any questions that have not been addressed in the article!