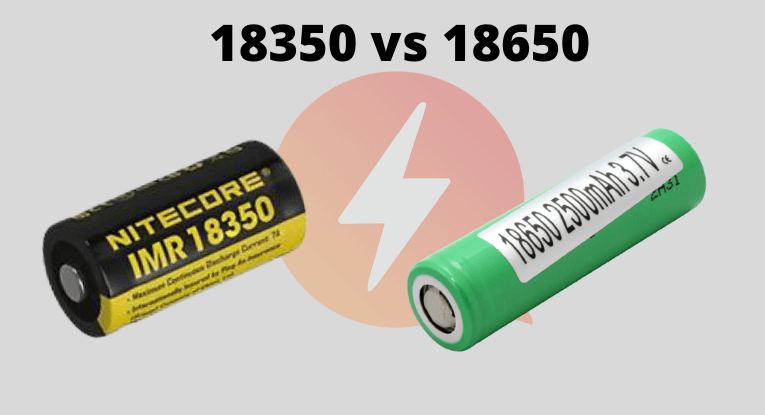 18350 and 18650 are two of the cylindrical batteries that are often used in devices with high power consumption. In this article, we compare these two lithium-ion batteries to highlight their differences and determine if there is a clear winner. So, let us begin.

What is the difference between 18350 and 18650 batteries in terms of capacity, voltage, and size?

If you’re having trouble remembering their size, all you need to do is pay attention to their name: In 18350, the two initial numerals, 18 and 35, relate to the diameter and length, respectively. The zero denotes the shape, which is cylindrical. This rule also applies to the 18650 battery; the first two digits indicate the diameter, which is 18, and the remaining two indicate the length, which is 65. And yet again, the zero denotes its form.

Note that, due to the fact that the market is now flooded with 18350 and 1860 batteries with inflated capacity claims, it is critical to purchase them from a reputable brand; otherwise, the rated capacity will often be less than what is stated on the battery’s packaging.

Because there are so many variables involved, it is impossible to predict how long a battery will last. These variables include the power consumption of the battery-powered gadget, the frequency and intensity with which you use it, the temperature of the device, the temperature of the surrounding environment, and so on. However, for the sake of comparison and providing an estimate, we can say that a device operating continuously on a 18350 battery can last between two and three hours.

In contrast, a gadget only used occasionally might last up to a day or possibly even two days. On the other hand, If you’re continually using a 18650 battery, you may expect it to last anywhere between three and five hours and up to two or three days when used occasionally. Because of its larger capacity, it is reasonable to conclude that 18650 is the clear winner in this comparison.

The following comparison is between the lifespan of these two batteries. Compared to other types of batteries, the lifespan of lithium chemistries, such as lithium-ion batteries, is determined by the number of charges and discharge cycles they undergo.

Both batteries have a life expectancy of between 300 and 500 charges and discharges. They both have the same lifespan because they are both made of lithium-ion chemistry, which is the same as the battery in your phone and power bank.

For more information on how long a 18650 battery will last, check out this article.

As with calculating how long a fully charged battery would last, estimating how long it will take to fully charge a battery is practically impossible. A number of factors influence this, including battery capacity, charger output power, charger’s charging technology, charger, and battery, as well as the environment temperature.  However, to give you an idea, 18350 batteries with an 800mAh capacity will charge in roughly 1.2 hours, whereas 18650 batteries with a 2300mAh capacity would charge in approximately 3.5 hours, according to the manufacturers.

As a result, when buying a charger, in addition to making sure that it supports the battery’s chemistry and form factor, confirm that it is equipped with fast charging technologies or, at the very least, has higher power output. Otherwise, you’ll have to wait up to six hours or longer, which might be rather inconvenient.

On top of that, because charging these batteries takes time, we often leave them connected to the charger, resulting in overcharging, which is a serious problem that should not be taken lightly. This is because overcharging lithium-ion batteries dramatically increases the risk of a fire or an explosion occurring. So make sure that the new charger you purchase has an intelligent circuit to protect against overcharging and other charging-related threats in order to avoid these issues down the road.

Along with the charger’s safe charging protection, look for batteries labeled “Protected” on their package or specification. The term “protected” refers to a battery that incorporates a tiny electrical circuit inside the cell packaging. This circuit protects the battery from numerous risks such as overcharging, over-discharging, short-circuit, overcurrent, and overheating.

Flashlights and vapes are two of the most common applications for the 18350 batteries. Due to the fact that these batteries provide a significant amount of energy for their size, many companies have decided to incorporate them into devices with higher power consumption as a result.

Also, take into account the fact that their little weight is a crucial factor in why companies use them for portable electronic devices. 18650 batteries, on the other hand, are used in a wide range of electronic devices, including torches, vapes, laptops, electric cars, and a number of other electronic devices. Similar to the 18350, this battery packs a significant amount of power and capacity into a very small footprint.

Because the 18650 battery is twice the size of the 18350 battery, some manufacturers build their products to be cross-compatible between the two body sizes. This allows customers to take advantage of the best of both worlds and adapt as circumstances dictate. Hence, if you have one of these gadgets, we can claim that they are interchangeable with one another. Aside from that, neither the 18350 nor the 18650 batteries have a proper substitute available.