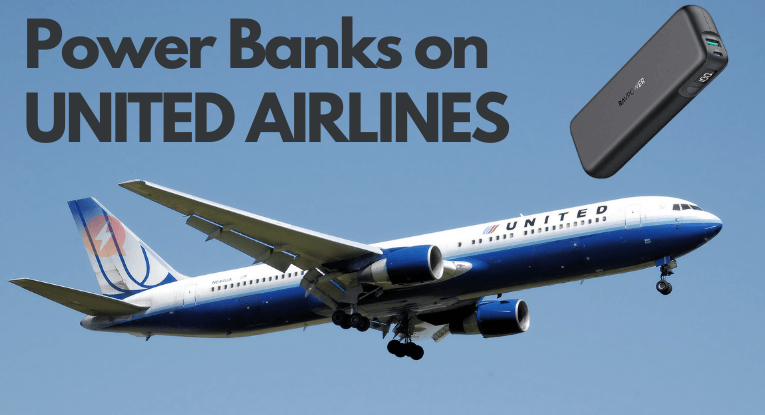 In addition, United Airlines has prohibited non-removable battery smart bags. However, if it is equipped with a detachable battery, you may carry it inside the cabin as long as the batteries are removed prior to checking your luggage. To avoid a short-circuit, cover and insulate the battery terminals to prevent them from coming into contact with any metal items such as coins, keychains, and so on. Keep in mind that lithium batteries can only be packed in carry-on baggage.

A watt-hour (Wh) is the estimated energy consumption of electrical equipment for an hour. Typically, the Wh is printed on the power bank, product packaging, or user manual. Certain items, however, are missing this information; in this case, visit our Wh calculator and enter the necessary values, including the mAh and Voltage of your power bank.

United Airlines’s policy on other types of rechargeable batteries

The following batteries are permitted on United Airlines flights: AA-9V, AAA, C, Carbon zinc, D alkaline, Nickel-metal hydride, and Silver Oxide. These batteries may be transported in carry-on luggage or checked baggage. However, just like detachable batteries in smart bags, their terminals should be covered and insulated to prevent short-circuits. Furthermore, personal electronic devices powered by lithium batteries are permitted to be packed in both carry-on and checked luggage, but the battery capacity should not exceed 100Wh, similar to power banks. It should be noted that United Airlines has made an exception to this rule, prohibiting e-cigarettes, personal vaporizers, power banks, and smart bags in checked luggage.

Since most mobility equipment, such as scooters and wheelchairs, is powered by a high-capacity lithium battery, each passenger is permitted to carry two lithium batteries with a capacity of more than 100Wh but not exceeding 160Wh into the cabin. Suppose you intend to bring loose lithium batteries; in that case, they should be packed in carry-on luggage in their original retail packaging, separate plastic bags, or protective pouches to avoid short-circuiting.

Recalled, damaged, or defective batteries are strictly prohibited. For example, suppose you own a product that has been recalled by the manufacturer due to a defective battery, such as MacBook Pro Retina display 15-inch laptops made between September 2015 and February 2017. In that case, you must switch off and unplug your laptop before the flight.

A phone or battery-powered item being stuck or lost within the seat assembly or aircraft structure is one of the most common accidents in airplanes. If this happens and you are unable to reach the device, do not attempt to adjust the seat assembly or the aircraft structure, and immediately inform the in-flight crew. Also, keep in mind that repositioning the seat may cause the device to break and catch fire.

While batteries are efficient and power most modern devices, they can be extremely dangerous to the point of death due to their flammability and toxicity, particularly lithium batteries. According to FAA statistics on airplane battery incidents, Delta Airlines tops the list with 29 incidences, followed by Southwest with 36, United with 23, and American Airlines with 10.

Because of the limits related to air travel, it is always recommended that you read their policies before purchasing a ticket. Also, if an airline’s official website does not provide enough information about your situation, contact them since you may encounter issues while onboarding. If you’re wondering about FAA and TSA regulations regarding portable chargers, read this article: What types of power banks are allowed on a plane? 3 TSA rules you need to know.