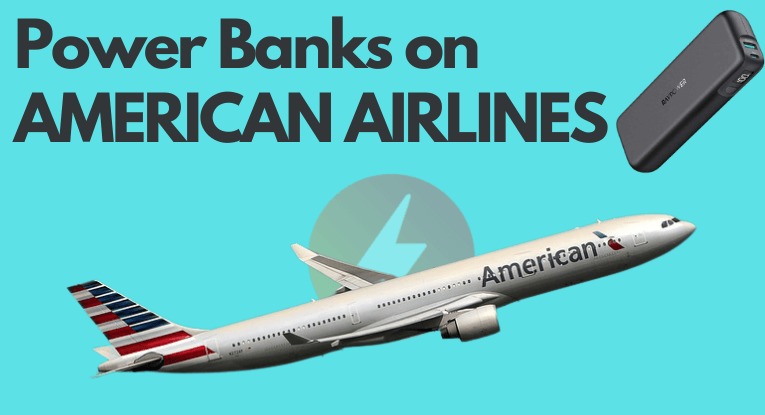 The American Airlines website does not specify the maximum capacity (Wh) of power bank that a passenger can bring to the flight; however, it does provide detailed information on the Lithium-ion batteries. You can bring up to 160Wh on the plane, but anything more than that should contact their special assistance.

If you are traveling with a smart bag, you must remove the batteries, place them in separate plastic bags, and then pack them in your carry-on bags. Most importantly, you can only carry power banks if used for personal purposes.

A watt-hour (Wh) is a unit of measurement for the estimated energy consumption of electrical equipment for an hour. Most companies often print the Wh on the power bank, the product box, or the user manual. On the other hand, some power banks and smart bags lack this information; in this case, visit our Wh calculator and provide the necessary data, including the mAh and Voltage of your power bank.

American Airlines’s policy on other types of rechargeable batteries

American Airlines permitted passengers to bring 9-volt alkaline, AA/AAA/C/D, carbon-zinc, silver oxide, zinc-air, lithium or lithium-ion, nickel-cadmium, and nickel-metal hydride batteries. Remove batteries from gadgets before going to the airport, place them in separate plastic bags, and bring them in your carry-on luggage. In addition, you are permitted to bring four spare lithium batteries, each less than 100Wh, or two spare lithium batteries, each between 100 and 160Wh. If you have batteries with a capacity of between 160 and 300Wh, please contact American Airlines’ special assistance before buying the ticket. Furthermore, American Airlines will let you carry a lithium metal battery if the lithium content is less than 2 grams per battery. Meanwhile, damaged batteries, including those from devices that have been recalled by manufacturers owing to battery defects, and any type of automobile, boat, or airplane battery are not permitted in carry-on or checked baggage.

According to American Airlines, you are allowed to carry battery-operated gadgets onto the plane, including a watch, calculator, camera, cell phone, laptop, camcorder, iPod, and iPad. Notably, they allow up to two of each gadget and two spare batteries for personal use only. As a result, bags and boxes containing more than the specified number for personal use will be rejected.

If something goes wrong with the gadget or battery, there is a strong possibility that it will overheat and catch fire. Therefore, it makes sense for passengers to carry them on board because if something goes wrong, it will be noticed instantly, and the crew can take proper action. However, according to John Cox, a former pilot and CEO of Safety Operating Systems, an aviation consulting firm, “As we put lithium-ion batteries in cargo holds, they are no longer in an area where the crew can deal with them if they do catch fire. And the fire suppression systems using only [the common extinguishant] halon have not proven to be effective on lithium-ion fires.”

Since the past decade, incidents involving batteries have increased, and airlines have been attempting to control them. For instance, Fox News reported on January 6, 2019, that an E-cigarette battery ignited on an American Airlines aircraft. Even though no passengers or crew were hurt, it could lead to a major problem if carried in checked luggage.

Always check the airline’s regulations on their website before purchasing a ticket to ensure that you are permitted to carry specific devices on the flight. Bear in mind that violating the regulations might result in up to five years in jail and a $250,000 fine (49 U.S.C 5124).

If you’re interested in learning more about FAA and TSA rules related to portable chargers, check out this article: What types of power banks are allowed on a plane? 3 TSA rules you need to know.