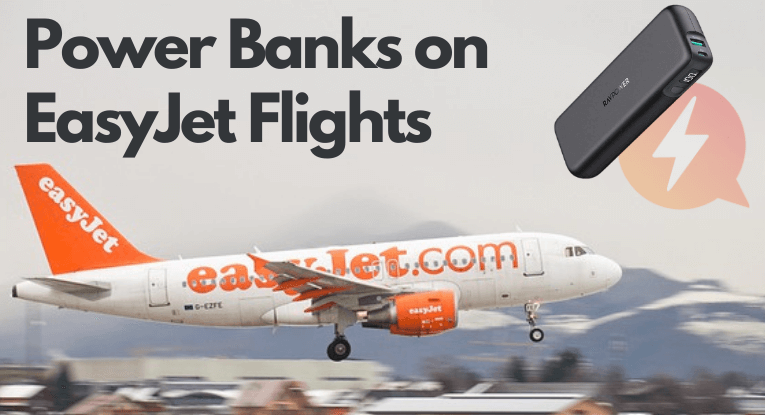 EasyJet, like every other airline, has stringent policies regarding carrying battery-powered devices on flights. For instance, this airline allows only power banks with a maximum capacity of 160Wh, as per their dangerous goods rules. In addition, EasyJet’s blog mentions that passengers are only permitted to take the power bank into the cabin.

Smart Bags work similarly to power banks in terms of charging devices and can be taken to the flight in checked bags and carry-on luggage. However, the battery should be disconnected in both cases, and the terminals protected against the short circuit. Bear in mind that if you want to bring the Smart Bag in checked baggage, you must carry the batteries to the cabin. Those who want to bring the Smart Bag to the cabin should also remove the battery and shield the terminals; but, you can keep the battery inside the bag once disconnected.

The power bank’s Wh capacity is often specified on the device, packaging, or user manual. Wh stands for watts per hour, which is the energy consumption of electrical equipment for an hour. If your power bank doesn’t provide you this information, you can figure it out by typing in the mAh and voltage into our Wh calculator.

EasyJet accepts gadgets with non-spillable batteries only if they are 12V or less and have a maximum capacity of 100Wh. Additionally, each passenger is permitted to bring no more than two spare batteries. According to EasyJet’s blog, travelers may bring them in both checked and carry-on luggage.

Devices such as watches, calculators, cameras, phones, laptops, and camcorders contain lithium metal or lithium-ion cells or batteries; the lithium metal weight restriction is 2g, while the lithium-ion capacity limit is 100Wh. Also, these electronics are permitted in both checked and carry-on luggage, as long as they are solely for personal use. In addition to this, all spare batteries for these portable electronic devices, including lithium metal or lithium-ion cells or batteries, must be carried only in carry-on luggage. Furthermore, these batteries must be individually protected in order to prevent short circuits from occurring.

EasyJet permits travelers to bring spare lithium batteries, up to a maximum capacity of 160Wh, for use in portable electronic devices (including medical). Lithium metal batteries with more than 2g of lithium but less than 8g are allowed exclusively for portable medical electronic equipment. Moreover, EasyJet has mentioned in their blog that carry-on luggage is limited to two spare lithium batteries. However, these batteries must be insulated separately to prevent short circuits.

Notably, If a product containing a lithium battery is subject to a safety recall due to the battery, in that case, the product must not be taken onto an airplane. If passengers become aware that they are carrying a recalled device, they should immediately inform an EasyJet representative. Last but not least, this airline permits the carrying of all electronic cigarettes, as well as two spare batteries, in carry-on baggage.

While batteries have enabled the dream of portable electronics to become a reality, they have also introduced several threats, such as devices catching fire and even exploding. Batteries have grown safer as a result of developments in this area. Manufacturers, for example, have put smart circuits into power banks and batteries, which continually monitor the battery to avoid any malfunctions. However, if not used correctly, these batteries might create major incidents. For instance, if squeezed in a backpack or exposed to direct sunlight, portable electronic devices (PEDs) can catch fire. Airlines are concerned about batteries as a result of these threats.

Airlines have decided to allow the batteries and battery-powered gadgets exclusively to the cabin, ensuring that appropriate steps are taken in the event of an incident. Because if something occurs in someone’s checked baggage, nobody will know except the airplane’s fire sensor, and by then, it will very certainly be too late to return and do an emergency landing.

This is because damaged battery cells rapidly release stored energy (potential and chemical), generating extremely high temperatures (up to 600°C and more), resulting in smoke, fire, and flammable gas. As a result, it is clear that batteries and power banks are not to be taken lightly, and EasyJet takes them seriously; nevertheless, this airline was not immune to the threats. For instance, easyJet #U28335 London Gatwick to Toulouse (Airbus A320 G-EZTN) returned to the gate twice in less than an hour, according to a tweet from Airport Webcams on March 3, 2019.

Always read the airline’s guidelines and comply with the restrictions, especially those related to batteries. Because, in addition to the dangers posed by batteries, you may be required to leave your pricey devices at the airport. If you’re interested in learning more about Transportation Security Administration (TSA) regulations, we recommend reading this article: Can you bring portable chargers on a plane? 3 TSA rules you need to know.