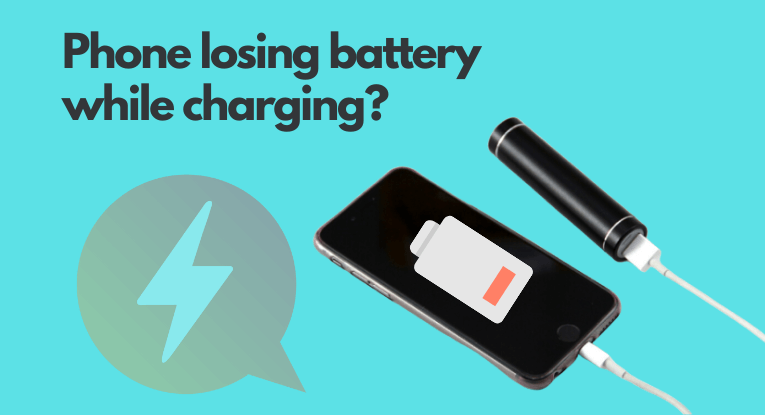 A phone losing battery when charging is one of the issues that can occur for a multitude of reasons. If you’re having this problem, we’ve covered each of them in detail in this article to ensure you identify the source and take appropriate action to avoid unnecessary costs. Let’s dive in.

If your phone is plugged into the charger but is losing charge, you should first confirm that the charger you are using is the one that came with the phone. If not, you must purchase the original charger and test to see if the problem has been resolved. The charger you are currently using may be incapable of delivering the necessary current to charge the phone.

You can also try using a charger from a friend or family member of the same brand to see what happens since your charger may have been damaged and is no longer functional.

Make sure that the issue is not related to the cable

If the charger is the original one that came with the phone and it appears to be in good condition, the next step is to inspect the cable for damage. If the cable became stuck before and you pulled it forcefully, the threads inside the cable may have become disconnected.

Perhaps it is time to change the battery

Lithium-ion batteries used in smartphones have a limited lifespan. They can be charged and discharged around 500 times before performance degrades. For instance, after about 500 charge cycles, they rapidly drain, and the battery no longer lasts as long as it did before. One of the telltale indications of a dead battery is that it continues to lose power even while connected to the charger.

If the phone is not brand new and you purchased it secondhand, or if you’ve had it for roughly a year, the issue is very definitely with the battery, which can be replaced. If the phone’s back panel is not removable, take it to a repair shop to get it done. It’s worth mentioning that we recommend that you check for other probable causes first, such as the cord and charger, in order to prevent unnecessary expenses.

If your charge source is not a wall outlet, check if the problem persists while using the wall outlet. If it does, replace the cable and retest. For instance, if you have connected your phone to the USB port on your computer, it is likely that your phone is drawing more power than your PC can provide, as it only provides 0.5 amps.

On the other hand, if you’re charging your phone through a power bank, the port may be clogged with lint, or the power bank’s battery may have reached its 500th charge cycle and is no longer capable of delivering enough current to charge gadgets. A similar issue can occur with car chargers. If the car charger is broken or counterfeit, it may also be incapable of providing sufficient electricity. As a result, we recommend that you test the phone using a wall outlet.

Do you have a problem with the port on your phone and must jiggle the connector on the cord in order for it to charge? We recommend cleaning the phone’s port since dust and lint might be blocking the connection if this is the case. However, before continuing with the following steps, ensure that the pins within the port are not bent.

If the problem persists after restarting the phone, it is most likely due to its port or motherboard. In both cases, your only option is to take the phone to a repair shop to have the broken parts replaced.

With the advancement of smartphone technology, apps have become increasingly resource-intensive. For instance, map apps and games are significant battery drainers due to their continuous data transmission and reception. If your phone is a little older or your charger is not original, using many of these apps concurrently may drain more charge than it gets, resulting in battery loss. To confirm this, we recommend that you turn off your phone and check to see whether it is charging normally or not.

Additionally, if you’re using the phone in a hot environment, this will accumulate and significantly reduce the phone’s performance, including charging speed. This issue is particularly common for people using their phones while driving or charging their phones in direct sunlight using a power bank. If you fall into this group, you should switch off your phone and charge it after cooling it.

Have you recently updated the firmware?

Have you just upgraded the firmware on your phone and are now having battery issues? If this is the case, your only option is to wait for the company to release the next update, as it is often not feasible to downgrade the firmware. However, given that the issue affects every individual who has updated their firmware, it is probable that the company will release a newer version within days to address the issue.

On the other hand, suppose the issue is not connected to any of the possible causes listed above, and you could not resolve it. In that case, we recommend backing up your phone’s data and doing a factory reset. This procedure occasionally resolves the issue.