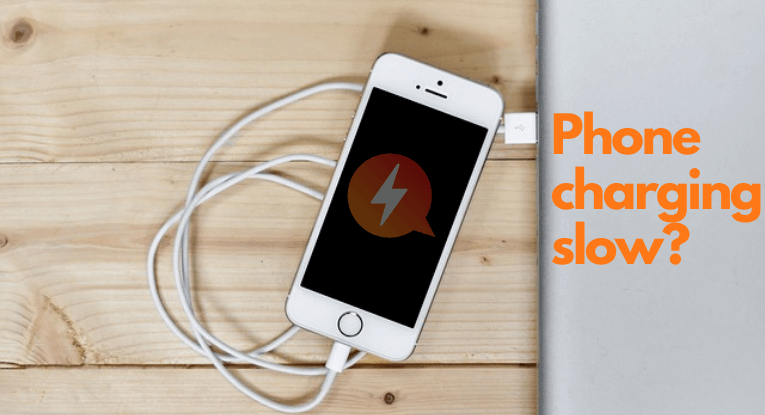 There are many reasons why a battery charges slowly or dies quickly, and in this post, we will discuss the causes and how to solve them. Therefore, let us begin.

First, we’ll address the primary question: why is my phone charging slow and dying fast? If both issues occur together, it suggests that the battery is the primary culprit and the only option is to replace the battery.

If the phone’s back panel is removable, you can purchase the compatible battery and replace it with the old one; otherwise, it must be sent to an OEM or repair shop for a replacement. If you are unable to change the battery for any reason, your only option is to purchase a new phone.

Since these two issues seldom occur concurrently, we have divided the article into two sections: the first section discusses why the phone charges slowly, and the second section explains why the phone dies quickly.

Why Is My Phone Charging Slowly?

If you frequently move your phone charger and cable, it is possible that they will become damaged, dusty, and so on. Always wrap the wires properly and avoid putting them in the bag unwrapped, as this could cause damage to the cable. Cables are more prone to damage because they are constantly dragged or yanked when the connector is stuck in, so replacing the cable is the first step toward determining the cause of the low charge.

Always use the cable and charger that came with the phone. If you’re using a cable from another phone, there’s a good chance it’s incompatible with your smartphone, which is the most common cause of slow charging. Avoid purchasing cheap and incompatible cables because, in addition to charging your smartphone slowly, they can cause damage to your phone and battery. Instead, ensure that you get a product designed particularly for your phone.

Because not all ports are built for charging, connecting the phone to a USB port on a laptop will result in a slow charge due to the low current delivered by the port. If you’re using a power bank, ensure that the current it offers is adequate to charge your device rapidly. In certain situations, the power bank may be the culprit; as a result, try charging the phone using a wall socket. Bear in mind that certain wall outlets include a USB port, which, like power bank ports, may not offer sufficient current.

If you’ve had your phone for a long time, say one or two years, the battery is almost certainly the issue. Batteries have a total life span of up to 2500 charges after which they must be replaced. Unfortunately, current phones do not have a removable back panel, which means that the user cannot replace the battery. Your alternative option is to send the phone to a repair shop or OEM for battery replacement.

Numerous manufacturers have issued recalls for entire batches of batteries, and if your phone is new, this might be the cause of poor charging. First, do an online search for your phone’s model to see whether it shipped with a defective battery and whether you can obtain a replacement from your carrier.

Background apps are very sneaky, and if left unattended, they may significantly slow down charging and deplete your battery. Navigate to Settings > Battery> Battery usage to monitor the apps that drain the battery even though you’re not actively using them. Uninstall apps that you rarely use but consume a disproportionate amount of battery power.

Moreover, make sure to close all apps before plugging the phone in to charge, as they can continue to drain the battery even when you’re not using it.

Tiny particles from your pants and bag pockets may have made their way into the phone’s port and been lodged there over time. To confirm this, check inside the port with a flashlight to determine whether it is dusty and clogged. Then, carefully remove them with a toothpick, being careful not to apply too much pressure. Avoid blowing air into the port since this might cause corrosion over time.

Using the Phone While Charging

If you’re charging your phone while using it, the charging pace will be determined by how intensively you’re using it. For example, light apps consume relatively little juice, resulting in a minimal reduction in charging speed; conversely, utilizing many apps or using the phone for gaming significantly reduces charging speed.

While we are all guilty of using our phones while charging, this is considered harmful to the device and battery. It causes the device to overheat, diminishing the battery’s life and capacity over time.

Wireless chargers are not only luxurious, but they are also functional. This feature eliminates the need to search for the cord and the correct connector side to plug it into the phone. This convenience, however, comes at a cost: wireless chargers charge at a snail’s pace.

Why Is My Phone Battery Dying Fast?

Even though developers are attempting to minimize the battery usage of their apps, these efforts are only effective up to a point, and perhaps you’re using these types of apps. Your option here is to alter your phone usage habits. For instance, if you’re watching a video from a content producer who also has a podcast, you can substitute their podcast for the video, as watching videos consumes a lot of battery.

Manufacturers have been vying for the finest screen since the debut of modern smartphones. Since then, the battery has been a major issue for manufacturers, as the display consumes the most battery power in comparison to other components. We offer a few tips to assist you in lowering the battery consumption of your display.

Because screen brightness directly correlates with battery consumption, we recommend decreasing it, mainly while using programs that do not need a high level of attention to detail. Certain apps and websites have a night mode that helps conserve screen battery life. If you’re presently utilizing live wallpapers, it’s time to switch to static graphics or even dark wallpaper, particularly if your phone features an AMOLED display.

Certain modern phones, most notably premium and gaming versions, allow for customizing the refresh rate. Utilizing a higher refresh rate might result in a quicker battery depletion. Auto-lock can significantly enhance battery life. By reducing the Auto-lock duration, the phone’s screen will switch off after a shorter period of inactivity, resulting in decreased battery use.

Leaving Wi-Fi, Bluetooth, and GPS Turned On At All Times

Leaving Wi-Fi on causes your phone to search for a Wi-Fi connection continually; by turning off Wi-Fi, this activity is halted, leading to increased battery life. Also, because GPS and Bluetooth, like Wi-Fi, are self-updating, it is suggested to switch them on whenever you require them.

If you’re trekking in the middle of nowhere or just commuting by vehicle or train and notice an inconsistent service, it’s a good idea to activate airplane mode. Perhaps you’re asking why this is a wise course of action; because the phone will constantly attempt but will fail to obtain reception, resulting in a faster battery drain.

As previously stated, developers are constantly working to optimize the performance of apps and software systems. As a result, you should always update your apps and operating system, as some reduce the device’s battery usage. However, even if it does not enhance battery life, the other benefits will be appreciated.

Do you receive an excessive number of notifications during the day? If that’s the case, we have the simplest yet most effective tip for increasing battery life.  Notifications consume a lot of battery because the phone vibrates in addition to the notification sound. Therefore, to enhance battery life, choose one of them, Rather than both. We recommend that you turn off the vibration and leave the sound on; however, if you are not waiting for news, always put your phone on silent mode to preserve the battery.

The next step is to decrease the number of notifications you receive daily. As we all know, there are some notifications that we do not wish to receive, such as those from particular apps or group chats. Apart from important individuals and groups, mute all others. This is possible through the app itself. If the notification is from an app, head to Settings> Notifications. If it’s hard for you to customize notifications, enable power-saving mode.

Keep An Eye On Background Apps

Certain apps run in the background, even while you are not actively using them. To discover these apps, head to Settings > Battery; if there are any apps that you rarely use yet consume a significant amount of battery, you should consider removing or restricting them. In addition, due to the fact that most apps run in the background, it is advisable to delete any unnecessary apps.

Even though multitasking has become increasingly common on phones as technology advances, we still encounter some difficulties occasionally due to some apps’ intensive nature.  If your battery is dying quickly, one of the causes could be that you’re using multiple apps at the same time, whether they’re light or graphics-heavy.

As with slowly charging, a battery that discharges prematurely indicates an old or faulty battery. If the battery is one or two years old, it has reached its typical life expectancy; however, if it is less than that, it indicates that you have not charged it properly. Bear in mind that phone batteries are Li-ion, and completely discharging or entirely discharging them can reduce the amount of energy they can carry.

Keep Track Of Your Usage

Some users report that their phone’s battery dies after four or five hours, which is significantly less than the manufacturer’s promised time. On the other hand, they are unaware of how they are using their phone and which apps are their most frequently used.  Monitor your phone usage for a day. If the apps you’re using are graphically intensive, or you’re constantly chatting with friends on messaging apps and watching movies, especially if your phone has a large screen, your battery isn’t dying quickly; rather, the real problem is you.