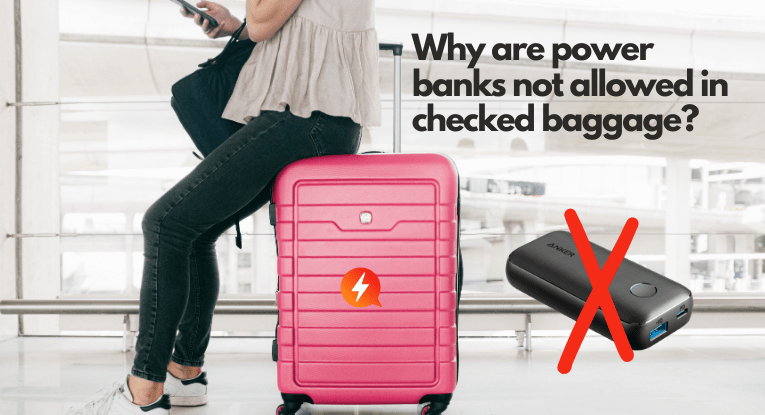 You may have noticed that power banks are not allowed in checked baggage. Instead, you can only take them in your carry-on baggage. Although this may seem counter-intuitive at first, it’s a rule created for safety reasons.

Since power banks are basically Li-ion batteries, they sometimes malfunction, which can cause fires or even explosions. Having a fire in the storage area of the plane is extremely dangerous since it’s basically unreachable during mid-flight. However, a fire in the cabin area is much more manageable as crew members can quickly put it out using fire extinguishers. This is basically why power banks are not allowed in checked baggage.

Here’s a demonstration of what might happen if a battery-powered fire would break up in the cargo area of a passenger plane:

This is why airline regulators have decided to impose the rule of not allowing power banks in checked baggage. In fact, this rule also applies to other types of batteries as well, such as uninstalled phone or laptop batteries. Some airports or airlines, especially abroad, can even be restricted and may ask you to take out any battery-powered device from your checked luggage.

On the 3rd of September 2010, a UPS plane crashed in Dubai. Investigations later revealed the fact that the cause of the crash was a fire that was possibly started (but not 100% proved) by Li-ion batteries. The smoke quickly filled the cockpit and overpowered the pilots of the cargo flight. The fire also disabled the crew’s oxygen supply system.

In July 2013 a Boeing 787 Dreamliner caught fire at Heathrow airport causing panic and disruption. The fire originated from a Li-ion back-up battery for ELT system, which is an emergency communication device. Although nobody was on board during the incident, thousands of people were affected as their flights were canceled or delayed.

In March 2018 a fire started aboard a Delta Airlines flight, but it was successfully put out before take-off and nobody was hurt. It turns out that the fire started from a Li-ion battery from a passager’s checked baggage. Had the event happened during the flight, the plane might have been lost.

In February 2020 a United Airlines plane made a forced landing in Florida after a passages’ laptop battery caught fire. Since this was an item in the carry-on luggage of the passenger, the crew managed to quickly control and put out the fire before it got out of control. Had this fire taken place in the cargo area of the plane, the story might have ended much worse.

These are just a few unfortunate events, but the FAA reports an alarming number of such events linked to Li-ion batteries. As of August 2020, they have centralized no less than 290 battery-related incidents, since they started tracking them in 2006. You can see the complete list here. As you can see from the list, the main devices that led to the incidents were laptops, e-cigarettes/vaping devices, cell phones, and power banks.

Although you’re not allowed to take power banks in your checked baggage, you can do so in your carry-on. However, the are some limits that apply here:

Other tips you should consider when flying with power banks:

For more information on rules and regulations check out our main article on the topic of taking power banks on planes.

As you can see, there are a lot of safety concerns related to Li-ion batteries that are stored in the cargo area of the plane. This is the main reason why power banks are not allowed in checked luggage. And since battery-related incidents are increasing each year, it’s not difficult to imagine that in the near future no batteries what-so-ever would be allowed in the checked-in baggage.

Maybe this will change as battery technology evolves and we’ll get past the Li-ion solution. New generation batteries might be completely safe and might not require these strict regulations. However, these types of batteries are still quite far away and for the foreseeable future, we’ll need to be mindful not to pack any power banks and even other batteries in our checked baggage.