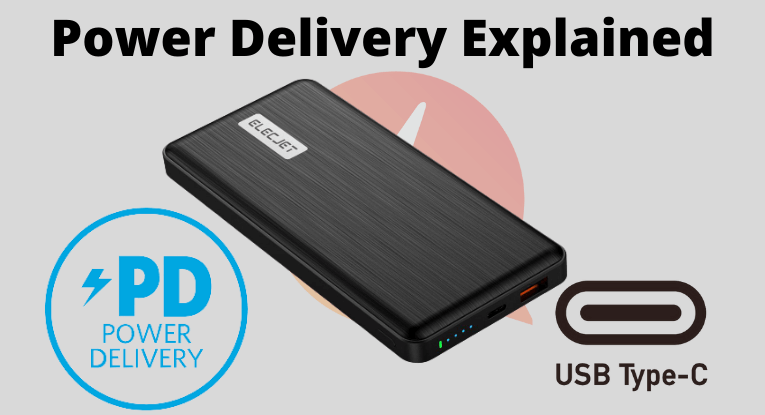 Charging smartphones, tablets, laptops, and other portable devices has never been fun, much more so since battery capacity has improved. To solve the problem, manufacturers have worked hard over the last decade to decrease charging time, developing many technologies like USB-C Power Delivery and Quick Charge. If you’re interested in learning more about USB-C Power Delivery and how it works, keep reading this article.

What is Power Delivery technology?

Since the USB port’s launch, much has changed; it has evolved into a significant power source with a data interface rather than merely a data interface. Power Delivery is a technology used in USB-C to increase the amount of power that can be delivered.

With this technology, power outputs of 140W, 180W, and 240W are possible at fixed voltages of 28V, 36V, and 48V. With this level of power, cellphones, tablets, laptops, and power banks can be charged up to 70% faster than with a conventional USB charger. This is because a standard USB charger has a maximum output of 5 watts.

Because USB-C Power Delivery technology is capable of delivering a significant amount of power, it is equipped with the ability to output the exact amount of power required by the device. Consequently, no concerns related to charging, such as overvoltage or overcurrent, would pose a threat to electronics. According to the specifications, this feature allows the charger and the device’s port to come to an agreement on the maximum amount of power that can be drawn from the charger. As a result, the charging process is accelerated.

Furthermore, because the charger and the device agree on the amount of power to be drawn from the charger, low-power devices such as wireless headphones can be charged as well. Because of this feature, you don’t have to buy a special charger for gadgets with minimal power consumption. A major advantage of USB-C Power Delivery is that the power flow no longer has to be in a fixed direction. To illustrate, you can charge a device using a USB-C PD-equipped phone.

Why is Power Delivery technology so popular?

In general, any fast charging technology is popular, and this is not limited to Power Delivery. However, it’s worth noting that a few key characteristics have elevated this technology above the competition. The primary advantage is that Power Delivery is a universal charging solution, allowing you to charge any device with a single universal charger equipped with USB-C PD.

Meanwhile, devices that utilize proprietary charging technology must be charged using the company’s charger; otherwise, the fast charge will not work. This feature alone pushed manufacturers to implement Power Delivery, and as a result, the majority of laptops, power banks, phones, and other portable devices now use this connector.

In 2012, the USB Implementers Forum (USB-IF) announced the introduction of the first USB-C Power Delivery technology. As with any new technology, the initial version was basic in comparison to what would come later. Subsequent versions, on the other hand, were more flexible and dynamic.

USB-C PD 1.0 is capable of supplying up to 100W of power, a significant improvement over previous USB generations. This version features five profiles: the first profile delivers 5V/2A and 10W of power, which is more than enough to power smartphones and hard drives.

USB-C PD 3.0 was first introduced to the public in November 2015. Both USB-C PD 3.0 and 2.0 deliver the same voltage and current levels. However, there is a significant difference in the quantity of information provided by the two methods.  USB PD 3.0 has made progress in terms of power delivery, but it’s more well-known for providing more detailed information about the device it’s charging and its power/ battery.

This includes notifying any device malfunctions or system changes, the device’s temperature, and any possible causes of lower charging speed, and so on.  Your device will send you a data message if, for instance, it detects an over-current or over-voltage while charging.

The Fast Role Swap (FRS)  is another new feature introduced with USB PD 3.0, and here is why. A Dual Role Port (DRP) is required by many systems, and this means that switching between sourcing power and sinking power must be rapid enough to prevent USB data corruption and video interruption. Meanwhile,  FRS allows for this rapid switching while safeguarding the USB data.

Later, the USB-C PD 3.0 PPS version was published due to the USB-IF organization’s significant upgrade to the previously described USB PD 3.0. The Programmable Power Supply (PPS) minimizes conversion loss when charging, resulting in a more efficient charge. When charging is more efficient, less heat is generated, which extends the battery’s life. As a result, it is safe to say that PPS fast charging is more beneficial to your device’s battery life.

The USB Implementers Forum introduced this technology in May 2021, claiming that USB-C PD 3.1 can support up to 240W. Because the USB-C was previously limited to 100W, this is considered a significant improvement.

Furthermore, according to USB-IF, this version features fixed voltages of 28V, 36V, and 48V, enabling power outputs of 140W, 180W, and 240W, respectively. This essentially implies that USB-C Power Delivery may now be utilized in different electronics where 100W was previously insufficient.

In addition, it’s worth mentioning that QC 4 and later versions support Power Delivery. Thus, if you’re looking for a charger that provides versatility — in other words, the ability to charge devices with differing power requirements from various brands, a charger with PD is your best option.

Which one is faster?

Due to the fact that both technologies are capable of supplying the exact amount of power required by a gadget, their charging speeds are fairly similar.  At the end of the day, because Qualcomm’s Quick Charge 4 and subsequent versions are PD-based, it’s difficult to say which one is faster.