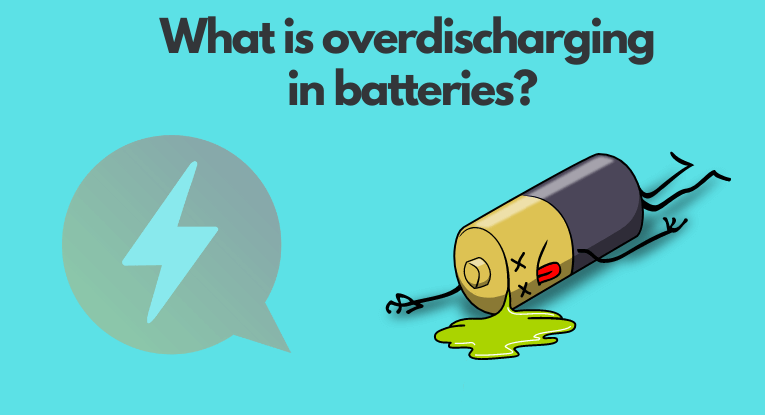 The term “Overdischarge” refers to a situation in which a battery’s voltage falls below the minimal level. In this article, we’ll discuss overdischarge and answer any questions you may have about it. So, without further ado, let’s get started.

What happens if the lithium battery is overdischarged?

According to a paper published in the Journal of The Electrochemical Society titled Overdischarge and Aging Analytics of Li-Ion Cells, due to the decomposition of the solid electrolyte interface (SEI) layer and the gases produced from it, overdischarge causes swelling in Li-ion pouch cells.

Due to the fact that overdischarged batteries swell, they become extremely dangerous at this point, and you should avoid applying pressure or puncturing them because the battery has a very high risk of catching fire or perhaps exploding.

Each time a lithium-ion battery is overdischarged, its capacity is dramatically reduced, which is one of these batteries’ downsides. Therefore, to avoid the negative consequences of overdischarging, keep them charged to at least 20%.

As previously stated, overdischarge happens when a cell is discharged over the minimum safe voltage limit specified by the electrode chemistry coupling. This is a pretty regular occurrence with battery packs. Compared to single cells, battery packs have the potential for overdischarge since all cells are depleted at a similar rate, regardless of their capacity.

For example, consider three lithium-ion batteries: two that are completely charged and one that is 50% charged (SOC). In this case, the partially discharged cell will be fully discharged before the other two and, if kept on, will be driven into voltage reversal by the other cells if the load is not removed. Eventually, the discharged battery will stop functioning and will most likely swell in the near future.

How do you fix an overdischarged lithium battery?

When lithium-ion batteries stop operating due to a lack of charge, this does not always mean they are permanently dead. Rather than that, they go into “sleep mode” when their voltage falls significantly and remains low for an extended period of time. The dead lithium-ion battery can be resurrected in this state. If you’ve made up your mind and want to revive the dead battery, we’ll explain how.

Step 1: Connect a healthy battery to the dead battery

Step 2: Charging and discharging the battery

Method 2: A charger with Boost feature

If you want to revive a battery more quickly and safely, or if you lack the required tools such as a multimeter, crocodile clips, and a healthy battery, we recommend purchasing a charger that has “Boost,” “Recovery,” or “Wake Up” features. 3.

Step 1: Purchase a charger equipped with the Boost feature

Step 2: Charging and discharging the battery

How to prevent batteries from overdischarging?

Typically, overdischarging occurs with batteries in equipment we do not use on a regular basis, such as drones. Therefore, after utilizing drones, ensure that they are not returned to their box with no charge remaining. At the very least, attempt to charge them to 20%; otherwise, the battery will die or its capacity will considerably decrease.

However, due to poor quality construction or lack of these features, certain batteries fail to protect against overdischarge. As a result, we recommend getting batteries from reputable companies. If you’re interested in learning more about this feature, check out this article: What is over-discharge protection in power banks?

While lithium-ion batteries have several benefits over other types of batteries, they have a few disadvantages, including overcharging and overdischarging. Although these drawbacks have been solved in recent years with intelligent circuits; yet, you should take care of them by purchasing chargers with safe charging protections and following correct charging habits.