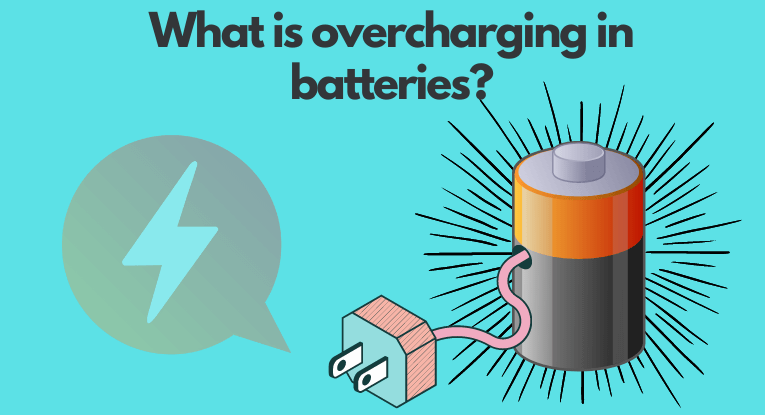 What happens if the lithium battery is overcharged?

When a battery is overcharged, the cathode material becomes unstable and emits carbon dioxide. As a result, the pressure inside the cell increases, causing the battery to expand, a condition referred to as the pillow effect or spicy pillow. Pressure builds until it reaches a critical point, around 500psi, when the battery shell bursts.

Note that a swollen battery is hazardous and should be handled with extreme caution. At this point, attempting to pierce the battery will result in it exploding and catching fire. Ensure that the battery is not left somewhere and take it to a battery recycling center in a non-flammable container. Also, don’t put any pressure on the battery.

What are the signs of an overcharged battery?

Furthermore, if the battery is still attached to the charger and you are unaware that it is overcharging, you will notice smoke and a burning smell, which is the beginning of a tragedy.

How do you fix an overcharged lithium battery?

An overcharged lithium-ion battery is unrepairable, and the best solution is to replace it. However, even if your battery is still functional, you should avoid using it because of the increased risk of an explosion or catching fire. If this occurs, your gadget will be destroyed because a simple battery replacement is overlooked. As a result, avoid taking the risk. Apart from safety concerns, the bloated battery has lost its maximum efficiency, which means it can no longer store the same amount of charge as before, causing the battery to drain more quickly.

Moreover, if you notice that your battery is overcharging but does not appear to be damaged, in that case, you should take extra care with it from now on. Because while the look of the battery may have remained unchanged, it is likely that its circuits have been damaged.

Does charging overnight cause overcharge?

The answer depends on the battery quality. If the battery you’ve purchased is from a well-known brand, then it is unlikely to overcharge the battery by charging it during the night. Because these companies have realized how much lithium-ion batteries are dangerous, and therefore, they incorporate smart circuit which protects the battery from risks related to charging.

How to prevent batteries from overcharging?

Lithium-ion batteries have made significant advancements in recent years, and manufacturers have made them far safer than they were before. This is because they have understood how dangerous these batteries can be. Thus, as previously said, most batteries are safe due to the integration of smart circuits.

However, without considering a battery safety circuit, the only way to prevent the battery from overcharging is to purchase a charger with built-in safety features. To confirm if your charger includes this feature, see its user manual or the product description on the website from where you bought it.

While batteries have made portable electronics a reality, they are extremely dangerous. Therefore, to minimize battery-related hazards, consider purchasing batteries and chargers from reputable brands. Because, despite low-quality batteries’ safe charging features, they regularly fail and create disasters.

Note that, if the temperature of your battery increases significantly when charging or if it has swollen, immediately stop using it since there is a higher chance of it catching fire and even exploding.