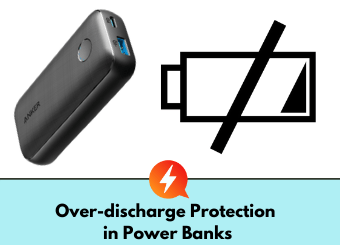 Whenever you buy a new power bank, you may notice that it comes with a series of safety features that are advertised by the manufacturer. One of the most common of these safety features is over-discharge protection. Basically all power banks come with this feature. Although there might be exceptions if you buy low-quality, knockoff devices, case in which, you never really know what you’ll get.

Let’s explore this topic further and understand what is over-discharge protection and what’s its role in the power bank battery.

The over-discharge phenomenon in batteries

Every battery comes with a specific capacity. This means that it is able to supply a certain amount of energy. Once this capacity is used up, the battery can no longer be used to operate an electronic device. Only after it has been recharged, it will be able to provide electricity again.

The voltage from which an accumulator no longer provides sufficient energy for an appliance is referred to as the final charging end voltage. Modern accumulators usually have a voltage of 4.35 volts when charged and 3. 7 volts when discharged.

Over-discharge is defined as the condition in which a battery discharges further than this minimum voltage.

Over-discharging can be very harmful to battery lifespan and its integrity. In fact, an over-discharged battery can be dangerous. For example, in the case of lithium-ion accumulators, over-discharge leads to irreversible damage and loss of capacity. If the voltage of a cell falls below the minimum voltage, it should no longer be used. It is very likely that copper bridges have formed, which then can lead to a short circuit. In this state, the cell becomes unstable and heats up a lot, creating a fire hazard. Deep discharged lithium-ion batteries should not be reused for safety reasons.

The over-discharge protection mechanism checks the battery voltage constantly and decides if it will stop the circuit or keep it running. This kind of check mechanism is configured in a BMS (= Battery Management System). In most cases a microcontroller is used in the BMS, that checks the battery’s state.

The basic idea of the over-discharge protection is to turn off the circuit when a certain voltage level is reached. Well, for building such a circuit, there’s not even a need for a microcontroller because the same effect can be created with the forward voltage of the diode. This circuit is very helpful because it can be self-made, as there are few components and they are very cheap. 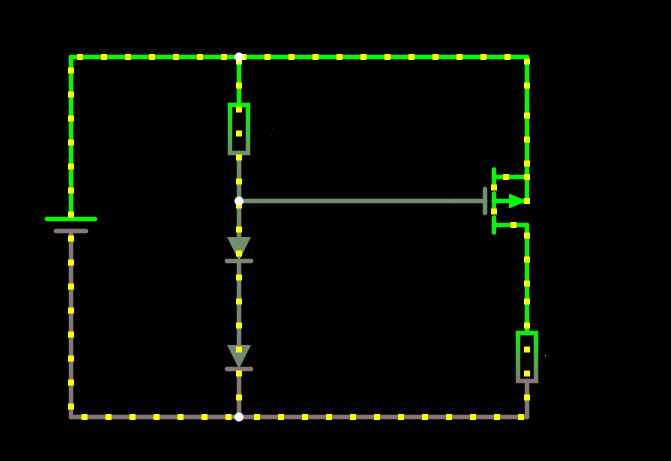 Below you can see a diagram of the load. As you can notice in the diagram, the voltage and the current are shut off. That’s the case when the power bank reaches a low capacity level. In this case, the mobile phone can’t be charged because the power output is 0.

Do all power banks come with over-discharge protections or just some?

All power banks produced by accredited manufacturers come with an over-discharge protection mechanism. It is a must-have because it is an important safety feature. Furthermore, it’s also very unattractive for the customer to check the power bank’s capacity and to turn the power bank off when it reaches a certain level. But, of course, if you are buying power banks from unknown producers for a very cheap price, you might get a device without this protection mechanism. This is a dangerous situation and should be avoided if possible. Serious power bank malfunctions can even lead to explosions.

Is deep discharge the same as over-discharge?

Yes, these terms are synonyms and can be used interchangeably.

Can over-discharged batteries be recharged?

Depending on how much the battery has been over-discharged it might be possible to get it recharged again. However, this requires a long amount of time, since the internal resistance of the battery is greatly increased. And it’s advisable for the battery to be supervised during the whole recharging process since it’s in an unstable state and something might go wrong.

What is the correct spelling?

As you read multiple sources on this topic you’ll see the following spelling variations: “over-discharge”, “over discharge” and “overdischarge”. According to the Meriam Webster dictionary, “overdischarge” is the correct term. However, other important dictionaries such as the Cambridge dictionary do not feature this word. So for now, the jury seems to be out on the correct spelling. Until we reach a final conclusion, we opted for using “over-discharge” as it’s the most popular variations in circulation today.