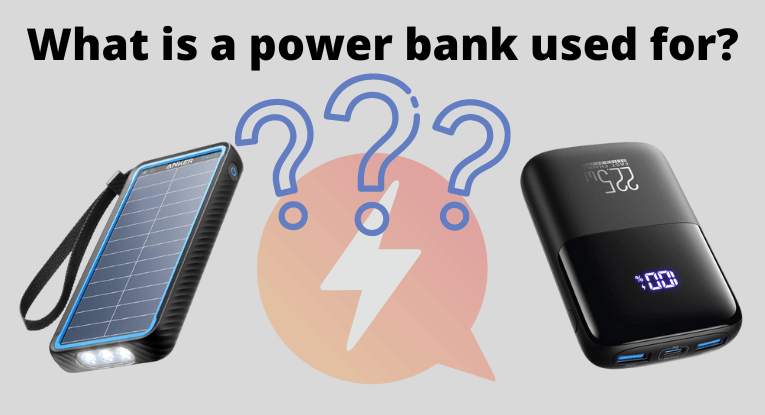 Power banks are rechargeable batteries that are designed to charge portable electronics on the go. They are capable of charging several gadgets simultaneously due to their multiple ports.

What can a power bank be used for?

Power banks are basically rechargeable batteries that utilize USB ports to charge USB-powered gadgets. Most power banks have a lithium-ion battery which stores a lot of energy in a relatively small space. Moreover, portable chargers are safer than other types of batteries, such as car batteries that contain acid as electrolytes. Therefore, power banks come in handy in many situations:

Charge your device off the grid

Most users buy power banks for charging phones and tablets. Most power banks are designed to fill up your phone battery at least once; thus, you can still charge your phone and use navigation apps when you go hiking or biking. However, there are strict regulations on carrying and using power banks on airplanes.

Given that we live in a portable world, power banks include at least two ports. Also, having power banks can be a blessing if you need to charge multiple devices simultaneously and you don’t have as many chargers.

Charging on the go

Being constantly on the run is a part of many people’s daily routine. Having a power bank in such situations saves your phone and other portable devices.

Power banks can be sorted into different categories based on their battery type, charging method, and connectivity.

Lithium-ion portable chargers dominate the market; they are cheap and yet have a high density. On the flip side, Li-Ion power banks are more likely to leak electrolytes and suffer from aging in the long run. Choose this type of power battery bank for daily uses in normal conditions instead of exposure to humidity and extreme temperatures.

Lithium-Polymer power banks are more flexible and have no liquid electrolyte. These batteries are more durable and safer; however, the drawbacks include higher cost, less power storage, and shorter lifespan than Lithium-Ion batteries. Suppose you want to use a safer power bank in extreme thermal conditions. In that case, this type of portable battery is more suitable.

These power banks are most practical for campers. Some variants also provide electricity when exposed to sunlight. However, solar batteries are more expensive and weigh more than other types of portable chargers. These devices might have Li-Ion or Li-Po batteries to store energy.

Due to the rapid advancement of wireless technology in recent years, it has made its way into the power bank market as well. However, because we still rely on wired connections, there are no power banks with purely wireless connections; thus, most people consider it a luxury feature on items, including power banks.

What makes a good power bank?

With the advent of portable devices, manufacturers decided to build power banks with a range of capacities to meet the needs of their customers, which explains why there are power banks with small and high capacities. As a result, when looking for the ideal power bank, you should consider how much consumption your devices have.

Note that, although large power banks can charge your phone a couple of times, they are heavy, costly, and less practical. Right now, newer devices have long-lasting batteries, and free chargers can be found just about anywhere. Furthermore, if you want to take your power bank on an airplane, it mustn’t store over 100Wh.

People who need to charge multiple devices, including laptops, would benefit from a large power bank. However, a 20000mAh is more than enough to support your smartphone. It is worth mentioning that larger power banks need longer charging and discharging times, which is inefficient if you do not require a large power bank. To conclude, you should choose capacity based on the consumption of your devices; so, the maxim “the more, the merrier” does not apply here.

Power banks are constantly at risk since they are meant to be used on the go. No matter how cautious you are, your power bank will eventually slip from your grip or fall from your desk.  As a result, a decent power bank should be durable enough to withstand a fall onto a hard surface. If you prefer a more robust power bank, there are power banks with waterproof, dustproof, and shockproof casings.

The majority of power banks use smart chips that regulate the voltage and current during charging. These chips protect your power bank and any devices connected to it against charging risks such as overcharging, overvoltage, overcurrent, and so on. However, keep an eye for cheap products that might damage your devices due to low-quality chips.

Although additional features like flashlights, solar power, and LCD displays are unnecessary for a power bank, they might be significant selling points for some customers. For example, power banks with these features are an excellent choice for campers and outdoor enthusiasts.

Numerous factors determine whether a power bank is good or bad, but one method to tell the difference is to read the reviews submitted by users who have purchased and used it. Because in some cases, the product is not as good as the advertisements claim. Make sure to check out the product’s review section for honest reviews before placing an order.