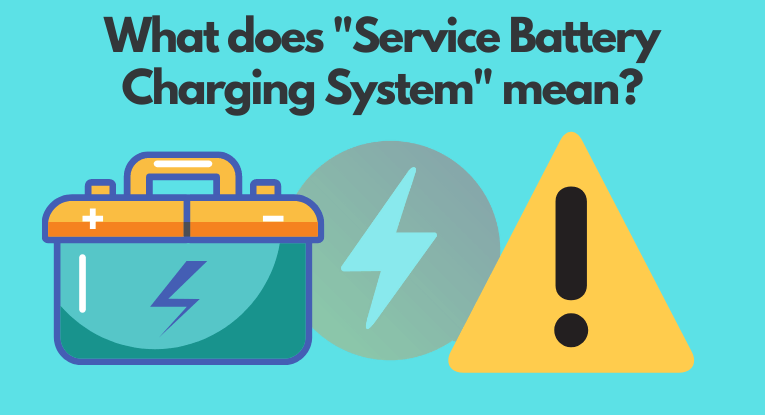 You get into your car, and everything looks to be in order until you turn the key and the engine refuses to start. Then you see a warning light and are perplexed as to what it means, and now you’ve ended up here reading this article.

What does a service battery charging system mean?

What is a service battery charging system?

Every vehicle has a set of electronic components, such as lights, an audio system, and so forth. And, service battery charging systems have two primary functions. The first is to supply electrical energy components such as radio and light. The second function is to charge the battery while the engine is running.

Causes of charging system failure in your car

These are the potential causes of charging system failure in the car:

The alternator and crankshaft are connected via a belt. A torn belt can cause your vehicle’s charging system to fail, and by replacing it, you will turn off the battery charging system warning light.

This is the most common cause of charging system failure. Poor wiring between charging system components can result in a short circuit. A short-circuit can lead to the electronic control unit and rectifier diodes on the rectifier diodes overheating and catching fire. In this case, you should replace this unit with a new one and then correct the wiring between new components.

Due to the increased heat and temperature generated by an alternator overload, the stator may catch fire. In order to understand why alternator overload occurs, it is necessary to go into more detail. There are a number of possible causes for this, including a battery of low quality that has to be recharged frequently or an alternator that has simply been worn out over time.

Let’s take a look at what the rotor does in a car engine. The rotor is connected to the crankshaft. Mechanical energy generated by the crankshaft rotor begins to spin and generates a magnetic field through transmission. This magnetic field eventually generates current for the stator. Due to installation mistakes, the rotor may be broken, resulting in the battery charging system lighting up.

When the battery runs out, there are two primary situations. One is that the battery is incapable of storing electricity. You should replace your battery in this situation. Another possibility is that there is a problem with your car’s alternator, which is responsible for charging the battery while the vehicle is running.

If you’ve ever noticed a problem with your car’s wiring or are aware of a problem with power transmission, the battery charging system light is almost certainly the reason. This is the simplest problem to address unless the short circuit resulted in the electronic control unit being fried.

How to do a simple charging system check

You’ll need to purchase a battery tester to test your charging system if you don’t already have one. There are eight straightforward steps to follow:

The meaning of results shown by the battery test device

The result of the battery test device could be:

Is it safe or dangerous to drive my car with the battery light on?

Driving a car with the battery light on is risky, as it indicates a problem with the alternator, battery, or wiring. Driving with these issues can cause the car to shut down, resulting in a plethora of problems, especially if you’re on a road trip. Therefore, we recommend that you test the battery and alternator with the battery test device before you hit the road or take your car to an auto clinic.

If you own a contemporary automobile, you should pay special attention to the service battery charging system since these vehicles are extremely sensitive to the battery’s and electrical system’s poor performance. Keep in mind that if you ignore any sign of an automotive problem, you will find yourself in hot water down the road.