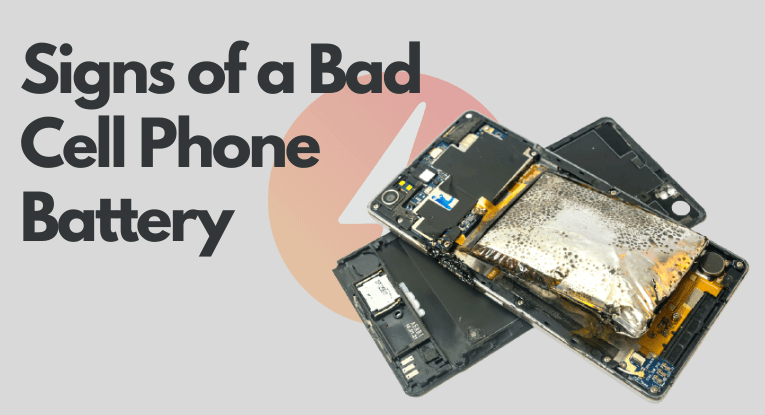 Are you experiencing automatic restarts when using resource-intensive apps, slow charging, or strange behavior from your phone? All of these are signs of a bad battery. So let’s get started learning more about the signs of a failing battery and how to treat our phone to delay the battery replacement.

If you notice that your phone charges rapidly and drains quickly, this is one of the signs of a bad battery. However, you should consider the apps you were using during that time, as some apps, such as games, consume an excessive amount of energy. If you haven’t used your phone in a while or haven’t used those types of apps, it’s time to change the battery. This issue may also occur in reverse, meaning that your phone takes a long time to charge the battery yet drains quickly.

You’re on your phone playing games, editing videos, or doing other things when it suddenly restarts or shuts down. Are you familiar with this scenario? Unfortunately, this is a common problem nowadays, and it is almost always connected to the phone’s battery rather than hardware or software difficulties.

This sign is similar to the first on the list, except that the time required to charge the phone is normal, but the battery drains quickly. If you’re unsure how long your phone should last, remember the first month you purchased it and compare it to your current situation. Also, you may look up the battery life of your phone model on the internet.

Heat generation is relatively common with batteries, particularly lithium batteries. Scientists have been concerned about and researching overheating for a long time, as it is highly hazardous. This concern is reasonable since we regularly carry portable gadgets in our hands or pockets, placing our lives in danger if something goes wrong. Remember, your phone will become warm when charging or running apps, but only to a certain degree, and you should be able to tell the difference between hot and overheated. The average temperature range for a phone is 0 to 35 degrees Celsius; however, you can usually tell if your phone is becoming warmer or not, so if you’re experiencing this issue, it’s a sign of a damaged battery.

5. When not in use, the smartphone’s battery drains fast

While it is evident that the phone requires battery power to operate, but the amount of battery power consumed when the phone is not in use is relatively low. However, if you notice that your phone’s battery drains faster even when you’re not using any apps or making calls, this is another sign of a failing battery. Depending on the phone’s battery capacity, it should last several days without running any apps or making calls.

Is your phone swollen? If you suspect the form and dimensions of the phone have changed, or the screen has begun to detach from the device’s chassis. All of these are signs of a failing battery, which you should replace immediately. Not only is it possible for the battery to explode due to excessive swelling, but the battery may also cause damage to the phone’s other components by creating pressure as a result of bulging. If a case protects your phone, remove it and check your phone’s back.

7. The phone’s battery status is inaccurate

If the phone displays around 50% battery remaining yet suddenly shut off and does not switch on. After connecting the phone to the charger, you switch it back on, but the battery level is shown as 0% or 1%. Also, it is possible that when you turn on the phone again, you will notice that the battery is around 50% or similar, but you will need to charge it further to keep it powered on. If you’re having this type of problem, it’s time to replace the battery.

8. The phone won’t turn on unless it is plugged in

What are the best habits for long battery life?

A battery generally lasts between 500 and 1000 charging cycles. Depending on your changing habits, your battery might die faster or last longer. Here are some tips to extend the potential life of your battery:

Batteries begin to deteriorate the minute they are used, but the process is accelerated when your phone is fully charged. While leaving the house with a fully charged phone gives you peace of mind, you might consider breaking this habit. Additionally, charging overnight is the same since you fully charge your phone and even after it reaches 100%, it remains plugged in. Avoid these routines to maintain a healthy battery for an extended period of time.

Running your phone’s battery to zero is just as bad as charging it fully. Therefore, if you’re one of those people who wait for their phone to die and then charge it completely to 100%, it’s a safe bet that you’ll need to replace the battery very soon. Li-ion batteries showed the most capacity loss during stress testing when they are discharged from a fully charged state to a quarter-charged state. This loss would be even worse if the phone died entirely.

Should I charge my phone at a certain percentage?

According to studies, the optimal charge percentage for your phone is between 20% and 80%. Bear in mind that because lithium batteries do not have a memory effect, this habit will not negatively impact your phone’s battery capacity. However, it has been shown to double the life of a battery.

Keep the phone cool and avoid using it while charging

Heat is the batteries’ worst enemy, as it significantly reduces their longevity. As a result, avoid using your phone in hot locations such as the beach and keep it cold. In addition, certain activities, such as playing video games or running resource-intensive apps, also cause the phone to heat up. Therefore, you should avoid running them for an extended period of time. Notably, never use your phone while it is charging. While it is safe to use the phone while charging, the generated heat may shorten the battery’s life and is therefore not advised.

How can I test my cell phone battery?

On your Android phone, dial the *#*#4636#*#* code, and a test menu will appear for basic troubleshooting. Next, tap on the battery info to view the information. A rating such as “Good” or another type of rating will show the battery’s health.

The AccuBattery app’s Health tab displays battery health data by comparing the estimated capacity of your battery to the factory-designed capacity. Moreover, This lets you compare the amount of energy your battery stores on a full charge to the first days you bought it as a brand new phone.

Can you fix a bad cell phone battery?

To begin, determine whether the problem is with your phone’s battery. If you are sure that the problem is not with the phone’s port, outlet, or charger and that they are all in good condition, your only option is to replace them. Unfortunately, there is no method to fix a dead cell phone battery.

Is it worth replacing the smartphone battery?

The answer is subjective. If your phone is less than a year old, consider acquiring a new one if you can afford it. On the other hand, replace the battery if you appreciate your phone and want to keep using it.

It is true that batteries have an expiration date, and phone batteries typically last approximately two years, with some lasting as little as a year. However, in order to avoid any expenses sooner than expected, it is important that we charge our phones properly. For example, avoid charging the phone overnight and fully emptying the battery, since both behaviors reduce battery life and result in slow charging, battery overheating, and the battery depleting faster than usual.