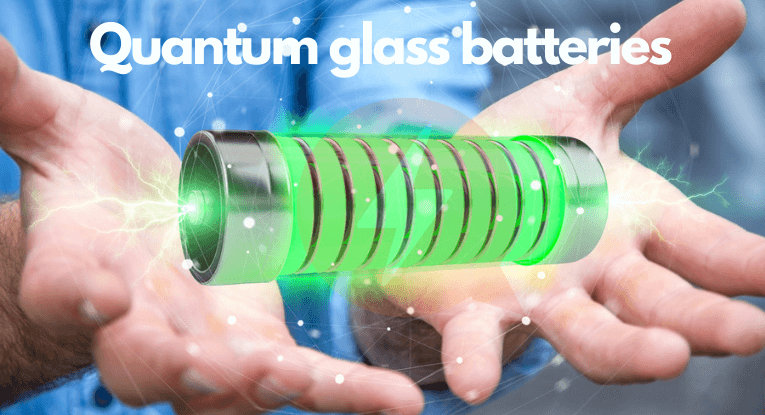 The world requires more electricity, preferably in the form of clean and renewable energy. The future energy-storage strategy will be influenced by Quantum glass batteries, which are at the bleeding edge of such technology, but what can we expect in the next few years?

What is a Quantum glass battery?

Let’s start with the battery fundamentals. Quantum glass batteries constitute a technological paradigm. Such a battery has an arbitrary dimension and identical Quantum mechanical systems. In what follows, Quantum mechanical properties can play a role to store and generate energy. In particular, such a battery employs inorganic ion conductors as electrolytes and surpasses the Li-ion battery technology. The description of this new sort of battery was initially published in Energy & Environmental Science in 2016, and it has been met with uncertainty.

This is all well and good, but what is often ignored is how this new battery technology also solves another thorny li-ion problem, that of batteries exploding. At the moment, a significant percentage of the weight of lithium-ion batteries is dedicated to preventing explosions, but Quantum glass batteries do not have this issue.

Matt McCall appears to have coined the phrase “Quantum glass” battery and has also referred to this as the “Jesus battery” and “holy grail,” saying that this technology would expand by up to 67.98% in the future years (a bold prediction). All in all, it’s a promising new battery technology and many people want to invest in it.

A quantum glass battery is stable in the electrolyte/electrode interface and has a higher energy density due to its liquid electrolyte solution. The electrolyte of a battery is a conductive substance mixture that permits current to pass among cathode and anode.

It is worth noting that there is no requirement for protection against internal fires and explosions because there are no dangerous elements. In addition, Quantum glass battery cells continue to function in the identical manner as existing batteries, however, materials changes affect the battery’s characteristics, such as safety, size, charging periods, and highest storage volume.

Generally speaking, inside a battery, current flows between the cathode and anode via an electrolyte (conductive), with separators employed to avoid the short circuits. The obvious benefit of moving from a liquid to a solid electrolyte is that the battery’s energy density may be increased. This is due to the fact that, rather than having huge separators between liquid cells, Quantum glass batteries only require very small barriers to avoid a short circuit.

Even so, Quantum glass batteries may store more than double energy than Li-ion when the anode is replaced with a more modest choice. The electrolytes of such batteries are typically less reactive than gel or liquid electrolytes, so they may be predicted to last considerably longer and will not need to be changed after only two or three years. This indicates that if the batteries are disabled or have manufacturing defects, they will not blow up or cause fires, resulting in safer goods for customers. If a Quantum glass battery is damaged or has manufacturing flaws, it will not cause fires or explode.

The solid electrolyte is responsible for the majority of the advantages of Quantum glass batteries. Conventional lithium-ion batteries utilize an organic solvent that is flammable and has a short usable life.

Key performance advantages of the Quantum glass battery include:

How will Quantum glass batteries impact our lives?

Another benefit of Quantum glass batteries is that they enable gadgets to be smaller. Moore’s law, or the concept that the number of transistors on an integrated circuit may double every year, has been a key driver of new, more portable technology ranging from digital cameras to flash drives. However, after decades of application, Moore’s law has begun to give lower returns in that sector. Quantum glass batteries have the potential to take over by shrinking the energy components of gadgets, eliminating the requirement for large physical sizes.

This battery offers an environmentally acceptable, economically viable, and technically feasible method of utilizing energy storage. Another advantage of this battery is the quick-charge facility (in minutes). This battery can store a higher quantity of energy due to the glass in the battery. According to co-developer Maria Helena Braga of the University of Porto in Portugal, this battery is capable of thousands of charge/discharge cycles. Furthermore, it can operate in extremely cold and high heat temperatures (-4F to 140F).

There is presently nothing better than a lithium-ion battery for powering a smartphone or even a Tesla Model 3. The rechargeable lithium battery has been the norm for everyday electronics products and electric-vehicle power since its debut in 1991. Lithium-ion batteries power many of the world’s more than 3 million electric cars. However, as the world accelerates toward an electric future, something greater than the lithium-ion battery is required to keep up.

How much time until they’ll become widely available?

Because the Quantum glass battery is still in its early phases of research, it is not yet economically feasible. According to Goodenough, the next stage is to ensure that the cathode problem (the spikes that cause batteries to catch fire) has been resolved.

According to Donald Sadoway, resolving the safety concerns will be a significant step forward. He highlighted that while people have been discussing Quantum glass battery electrolytes (as opposed to liquid lithium) for years, no commercial solution has emerged. Once that is completed, Goodenough will leave the development of the Quantum glass battery to the manufacturers.

However, Keiji Kaita, vice president of Toyota’s powertrain division, told the industry journal Automotive News earlier this year that the firm needs to enhance the battery’s short life lifetime. The company intends to use Quantum cells in some of its own EVs as early as 2025. Toyota, like Volkswagen, intends to have Quantum glass batteries on the road by 2025.

What Quantum glass batteries stocks to look for?

The electric vehicle (EV) business is one of the trendiest industries right now. Every major car company appears to be engaged, whether it is Tesla, General Motors, or Nissan. While there is a lot of buzz about the industry in general, people are also wondering about how you plan to fuel these cars. That is why Quantum glass stocks are gaining traction. Without further ado, here are three Quantum glass stocks to watch: Kensington Capital, Samsung, and Panasonic are among the companies involved.