The 2020 pandemic has brought unprecedented disruptive changes to the global economy and the full effects are yet to be seen. Almost all industries have suffered instant sharp declines, but some were hit harder than others.

One of the hardest-hit industries is tourism, which is expected to contract by as much as 25% in 2020, according to The World Travel & Tourism Council. Alongside with travel, many connected industries will suffer similar declines.

The power bank industry, quoted at around $10.7 billion in 2019 according to Markets and Markets, was expected to continue growing in 2020, the estimations being that it would reach 17.9 billion by 2024. 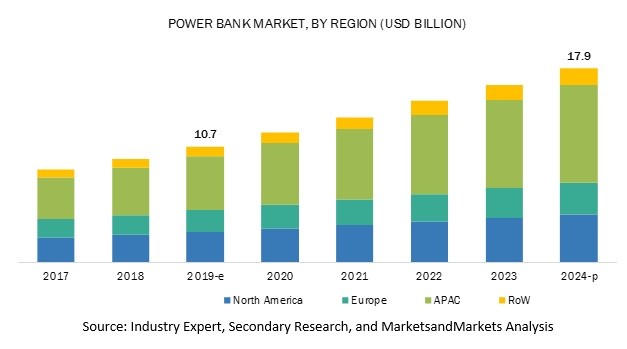 As increasingly popular consumer devices, power banks are heavily dependent on the travel industry. Most power bank owners purchase them with the sole purpose of using them while traveling either for business or pleasure.

As such, the demand for these devices has seen a sharp decrease with the onslaught of global lockdown measures. The dust has not yet settled enough for a complete view of the damage, but the impact can be estimated by a quick look at the evolution of search volume as estimated by Google Trends.

According to Google Trends, the disruption in search volume for power bank related keywords is around 50%. The good news is that the lowest point seems to have been reached at the beginning of April 2020, and the demand is starting to creep back up.

Unfortunately, this is only the start of what is considered to be one of the biggest recessions since the great depression of the 1920s. Given this troublesome outlook, we have contacted the leading experts in the power bank industry to get their opinion on how this downturn has affected their companies and what their predictions are in terms of future evolution.

As Zendure is a global brand, we noticed different results in different regions. In addition, since we have different product categories such as power banks, chargers, travel adapters, cables, and hubs, we also noticed that the virus had different impact on each category.

To be more specific, China was the first country to suffer a huge decrease in the first two months in February and March, but it’s also the only country that’s recovering rapidly so far. Europe and US witnessed huge drop in sales in general since March. Middle East has been stable until recently when GCC countries decided to implement curfew.

In terms of categories, our travel adapter business saw the biggest downfall, as you can imagine. As for power banks, we found that small capacity power banks are less needed, but big capacity products, such as SuperTank, our 27,000mAh power bank with 100W PD, are becoming more popular because a lot of people are buying them for emergency backup. Another product, the 100W SuperPort 4 charger is also popular because it’s great for working from home. In fact, Apple’s headquarter in California placed a big order for the two products mentioned above for their employees.

Another trend we noticed is that the demand for hubs is greatly increased because people are working at home, so they need hubs to charge and transfer data. That’s why our latest product, the adapter & hub 2-in-1 SuperHub was a hit on Kickstarter recently. We also have power banks with hub built-in such as X6.

I think the above-mentioned trends will continue. The market will demand more high-capacity and high-speed chargers, so this market will expand, but the need for small capacity power banks and travel adapters will contract because people travel less.

As Bill Gates mentioned, travel will still be greatly affected in the next few years. When people stay home more, they’ll need more powerful chargers to charge their laptops, and they need bigger capacity power banks for emergency back-up. Also, there’ll be more need for hubs. So it’s hard to say if the whole market will grow or contract since there are different products.

I think power and charging companies need to move towards bigger capacity, higher power products with more versatility such as hubs because this is what customers need.

We plan to launch more competitive new products with more features that fit the market trend. We are planning to launch upgraded versions of SuperTank, SuperPort and SuperHub. Also, we plan to focus on regions that are less affected by the virus, such as China, Korea, and Japan, and wait for the recovery of the US and Europe. We are confident that the world will recover eventually, so we need to keep working on our mission of “making power available everywhere”.

We have seen increased demand for business class chargers, which would be higher capacity chargers with strong output ports. These devices are used ideally suited for charging laptops and tablets.

At this point, it is anybody’s guess. If there is more remote work, the power bank category could see additional growth. Companies will need to focus strongly on costs and being as efficient and flexible as possible.

Our business is built on repeat customers. Our approach is to provide the best possible product at a competitive price. We focus to build products that are very reliable that will serve our customers well for a long period of time.

At Power Bank Expert we believe that the power bank industry will indeed take a big hit from the upcoming economic recession, but the industry has the potential to recover faster than other markets.

For starters, power banks are not high-ticket items that can put noticeable dents in consumers’ budgets. Furthermore, they are highly useful and dependable items that can help people stay connected, a vital need in the post-pandemic society.

Also, given the economic hardship ahead, many consumers will decide to delay upgrading to new smartphone models in order to make an effort to save money. This will lead to smartphones being used 1-2 years longer than usual. As such, the battery efficiency will drop overall and consumers will look for power banks to supplement their less efficient battery. In the end, it’s much easier to get a $20 to $30 power bank than to invest $500 to $1000 in a new smartphone.

And last but not least, we believe that in order to secure supply chains and to be price competitive, some companies might be looking to relocate their production facilities to other countries other than China.

As the trade wars rage on, and the average workers’ salary in China slowly going up, other countries will start to be more attractive for production facilities. For example, Vietnam is quickly becoming a power hub in the area on the basis of lower production costs than China, but other countries closer to the US, such as Mexico, can become a viable solution too.

It remains to be seen how the new global economy will affect the power bank market, but one thing is for sure: only the flexible companies that adapt to the new environment will make it through to the end of this.