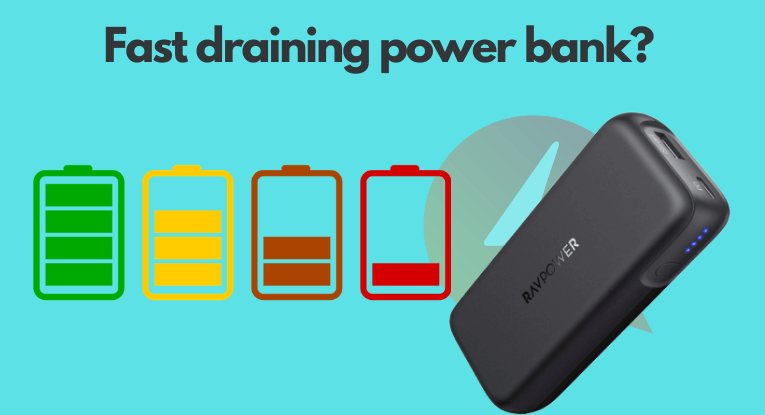 While power banks have advanced tremendously in terms of capacity and are now available in huge capacities, charging methods have also improved significantly, resulting in the power banks depleting quickly. However, power bank batteries can drain rapidly for various reasons, which we’ll go over in this post. So without further ado, let’s get started.

Possible causes for a power bank to lose charge fast

You have the Lightning cable always connected

According to customer reports, when Lightning cables, especially USB-C to Lightning cables, are plugged into a power bank’s USB-C port, they drain a tiny amount of electricity, which can be enough to trick some power banks into remaining powered on and slowly discharging.

However, discharge caused by a connected USB-C to Lightning cable is only plausible with power banks equipped with low-current charging (trickle charging). The power banks that don’t have this feature automatically shut down the power supply under a specific value.

Any type of damage to the battery may result in the portable charger losing power faster than anticipated. If you recently dropped the power bank in water or on a hard surface or used it in extreme weather conditions (very cold or scorching), this might result in battery damage and capacity loss.

Consequently, you might notice that the battery drains more quickly than usual. Additionally, overcharging, over-discharging, and short-circuiting are all major problems resulting in severe battery damage. When these types of issues damage a battery, the power bank usually swells, which can lead to serious accidents including fires and explosions. This is why it’s crucial to examine the power bank for signs of damage.

The battery is close to its maximum lifespan

Lithium-ion batteries have a capacity of around 500 charges and discharges before losing about 20% of their capacity. Therefore, if you’re near this number, it’s common for the battery to drain more quickly than usual. It’s also worth mentioning that your charging routines have a significant influence on battery life.

For example, if you totally discharge the battery and leave it that way for an extended period of time, the power bank will lose most of its capacity within a month or two. However, if you never discharge the power bank below 20% and never charge it beyond 85%, you will retain its battery’s full capacity even after 500 charges and discharges.

Difference between the advertised and actual capacity of the portable charger

As a result of this, customers might feel that the power bank battery is depleting too quickly. The reason for the difference between the advertised and actual capacity of the power bank is due to several factors, including the following:

If you’re interested in learning more about this subject, check out our dedicated article on this topic: Why is there a difference between real and rated battery capacity?

Another common reason for power banks to drain their capacity fast is the internal resistance of the USB cable. Generally speaking, all cables have a resistance that causes power loss. But in most cases, this goes unnoticed because the lost values are very small. When it comes to faulty and counterfeit cables, their low quality results in increased power losses. The battery drains more because of the wasted electricity caused by power loss.