Scientists have been trying to make electricity accessible to everyone across the globe, but they have always faced barriers like cost. At the moment, it appears as though the liquid metal battery has the solution and is on the verge of a breakthrough.

What is a liquid metal battery?

During World War II, German scientist Georg Otto Erb developed the first operational thermal batteries utilizing a salt mixture as an electrolyte. Erb designed Batteries for military uses like the V-1 flying bomb and V-2 rocket, in addition to fuzing artillery systems. A lot of research has been done on rechargeable batteries that use sodium (Na) as the negative electrode since the 1960s. As a result, Sodium–Sulfur, Sodium–nickel chloride (Zebra), and Liquid-metal batteries were developed.

Professor Donald Sadoway of MIT has led the field of liquid-metal rechargeable batteries by extensive research of liquid-metal rechargeable batteries, using magnesium–antimony, and lead-antimony. This new technology was presented in 2009 when researchers discovered they could use molten salt to separate magnesium and antimony. Magnesium was chosen as the negative electrode due to its low cost and limited solubility in the molten salt electrolyte. Also, due to its low price and higher expected discharge voltage, antimony was chosen as the electrode for the positive electrode.

In order to commercialize liquid metal battery technology, Donald Sadoway formed The Liquid Metal Battery Corporation in 2010. Later, in 2012, the company rebranded as Ambri. It is worth noting that, A total of $40 million was invested by Bill Gates, Khosla Ventures, Total SA, and GVB between 2012 and 2014.

Liquid metal batteries are made from a liquid calcium-alloy anode, a molten salt electrolyte, and an antimony solid particle cathode, allowing the use of economic substances and a simple assembly process. Cells from Ambri undergo reversible alloying and de-alloying while charging and discharging because of the active components in the cells. In addition, the electrolyte’s thermodynamic stability with the electrodes minimizes the possibility of other unwanted side reactions, including film formation, which can reduce the performance of other cell chemistries.

There’s also no memory effect because the negative electrode is entirely depleted when discharged, and it’s regenerated every cycle. As a consequence, the procedure is extremely repeatable and with no memory effect. Ambri’s liquid metal battery technology avoids the usual degradation mechanisms that cause capacity fade in other chemistries, thanks to these unique operating features.

Liquid metal batteries contain liquid components, meaning that chemical constituents and electrical charges can be moved extremely fast from one component to another. Therefore, large current amounts can enter and leave the battery very quickly.

Furthermore, according to Professor Donald Sadoway, when liquid metal batteries discharge, the top layer of molten material becomes thinner, and it thickens while the charging cycle is executed. That said, the battery can readily adapt to the container’s shape due to the fact that it’s highly flexible. While solid electrodes can snap and fail in various ways, liquid electrodes are in a better position since they don’t deteriorate over time as lithium-ion batteries do, making them more reliable.

Ambri’s cell is non-conductive at normal temperature, and its active components are solid metals and a solid electrolyte. Ambri-based battery systems function at optimum performance no matter the exterior temperature and do not require power-hungry air conditioning once heated to 500C temperatures.

Because Ambri-based systems create their own heat while in operation, they do not require auxiliary power to maintain a stable temperature. When these systems are fully charged and discharged at least once every two days, they will remain at their working temperature, and more significant duty cycles will not cause the system to degrade.

The solution offered by Ambri is a fully-assembled, DC containerized system that includes cell shelves, thermal management, a weatherproof exterior, and a battery management system (BMS).  It is intended for use in applications requiring a lot of energy, frequent cycling, long life, and great efficiency.

MWh-scale systems are constructed from cells mounted on trays and interconnected within a thermal enclosure. These systems are then connected to the grid through standard industrial DC-AC bidirectional inverters. Because the system is insulated and “self-heating” when in use, there is no need for additional heating or cooling to maintain the batteries operational. For projects that are vast in scale, many systems can be installed on-site and connected in parallel, providing limitless upward scalability.

The container is three meters in length and has a capacity of 400-1000kWh or up to 140 kW. DC efficiency is greater than 80% throughout various application cases, and voltage ranges from 500-1500v. It’s worth noting that the response time is 500 milliseconds.

Ambri cells use available electrode materials that cost about a third of what NMC lithium-ion cells do. Compared to lithium-ion, Ambri cells are easier to manufacture and need 1/3 to 1/2 the capital expenditure per MWh of production. The Ambri-based systems do not require cooling or fire suppression, nor do they require BMS equipment in the form of modules and racks as lithium-ion systems do. If you compare the cost of lithium-ion batteries over a period of 20 years, Ambri battery systems are significantly less expensive. 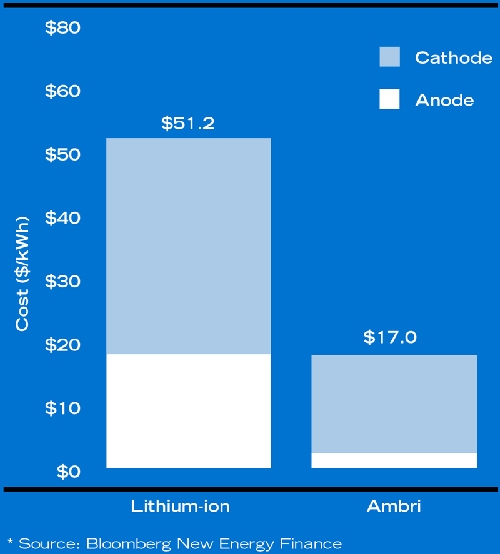 No threat of fire and explosions

Ambri energy storage devices will provide a cost-effective and safe solution to the global requirement for grid storage. In addition, due to the proliferation of lithium-ion batteries in grid-storage applications, new opportunities for safer, longer-lasting batteries for long-duration applications have arisen.

Around twenty explosions or fires have been reported in lithium-ion energy storage systems. On the other hand, Ambri batteries are non-explosive, non-combustible, and unaffected by temperature changes. Notably, there hasn’t been a single safety issue with these cells due to excessive charging or discharge, short circuits, or temperature changes.

Because of their differing battery chemistries, liquid metal batteries appear to be more suited for large-scale power storage, whereas lithium-ion batteries are better suited for mobile applications.  Additionally, unlike liquid metal batteries, lithium-ion batteries can be manufactured in various shapes, which contributes to their versatility in various applications, including batteries of phones, laptops, and cell phones. Finally, for most consumer gadgets on the market today, their high rechargeability makes them a suitable power source.

How will they impact our lives?

According to Liquid Metal Batteries: Past, Present, and Future, although liquid metal batteries have many advantages, they have certain drawbacks that make them unsuitable for portable applications and perfect for grid storage. This is due to the high operating temperatures (generally >200 °C), the relatively low theoretical specific energy density (typically 200 Wh kg1), the relatively low equilibrium cell voltages (typically 1.0 V), highly corrosive active cell components, and the high self-discharge rates for some chemistries due to the metallic solubility of electrode species in the electrolyte. Furthermore, the battery’s three liquid layers make its operation sensitive to motion and potentially dangerous if the liquid electrodes touch, resulting in a short-circuit and fast heat generation.

Moreover, while other types of batteries like liquid metal may be getting attention today, Lithium-ion batteries are sure to remain the dominant technology in the world of electric vehicles and portable gadgets for many years to come. This is because only these batteries are capable of packing so much power into such a compact, light body. There is also a significant manufacturing base for lithium-ion batteries that helps to keep costs low. As a result, they hold a dominant lock on the EV market, and it will be a while before it is broken.

How much time until they’ll become widely available?

According to Ambri, the global energy storage market is expected to reach $50 billion by 2030. As a result, this company intends to have a “significant portion of cell sales” by then. The company aims at increasing its total commercial project production to 250 MWh by 2023. Ambri is looking to grow, with every major region across the world eventually having a manufacturing facility.

Despite setbacks and poor results in 2016, Ambri overcame obstacles and signed an agreement with TerraScale’s Energos Reno Project. This contract represented a significant milestone for Ambri but also a major financial risk for TerraScale, as it involved a technology that had not yet been proven in a commercial environment. However, it confirmed that Ambri’s technology is ready for wide deployment. On the other side, because there are so many manufacturers in the lithium-ion battery field, their prices have come down significantly. As a result, competition for liquid metal batteries remains challenging at the moment.

What is the reason behind the optimism about the future of liquid metal batteries?

The International Energy Agency’s World Energy Outlook report, issued in October 2020, claims that the world must reduce its greenhouse gas emissions by 40 percent in the following nine years in order to achieve carbon neutrality by 2050. But, of course, we’re miles away from that, not even close. For obvious reasons, the year 2020 was a bit of an aberration. After the global vaccinations, grid operators worldwide are putting more effort into integrating low or zero-carbon technologies into their systems as rapidly as possible to meet the challenge.

According to Bloomberg New Energy Outlook 2020, solar and wind will provide 56% of global energy consumption by 2050, with hydro and nuclear power providing the remaining 21%. Therefore, we need low-cost and low-maintenance storage technologies to reach this goal. When it comes to battery technology, however, lithium-ion batteries clearly have the upper hand at the moment. They also happen to be the most cost-effective choice currently on the market due to economies of scale. 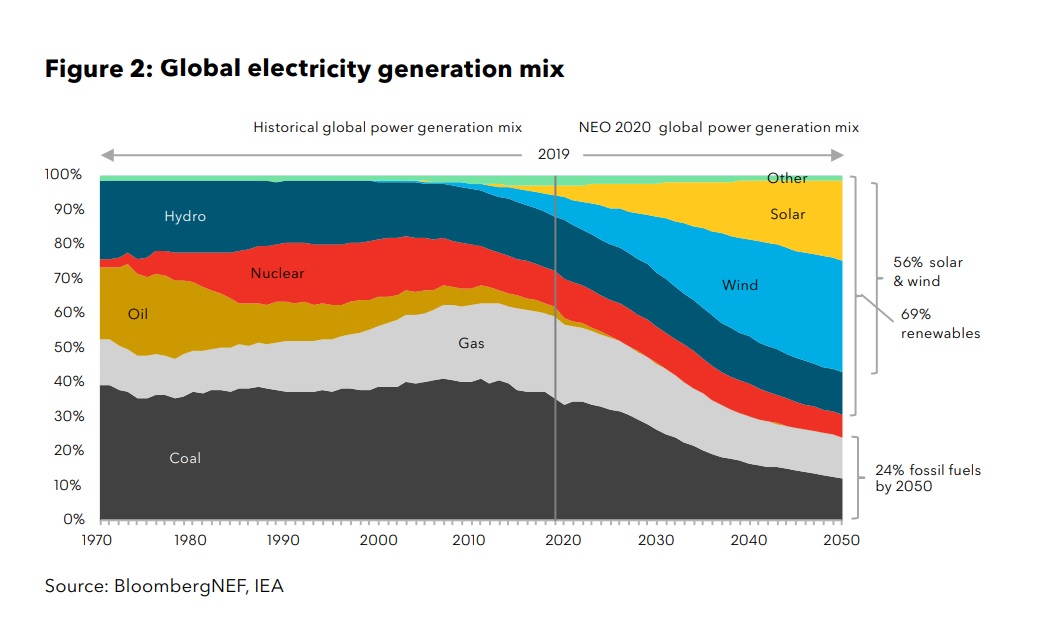 However, while they have a high energy density and can react milliseconds to grid frequency fluctuations, they weren’t built for very large utility-scale implementation.  As a result, these batteries are considerably more suited for use in computers and phones as single cells. In addition, to maintain the cell voltages balanced and keep temperatures down to acceptable working levels, the cells must be constantly monitored when connected in bulk. On the other hand, liquid metal batteries do not have these drawbacks, making them an excellent grid storage choice.

Currently, Ambri isn’t listed on the stock exchange because it’s a private company. Because it is not listed on a public stock exchange, Ambri is not currently available to regular investors. In addition, since Ambri is a privately held firm, only venture capital funds and other big investors are permitted to invest in the company. Bill Gates, Khosla Ventures, Total, KLP Enterprises, and Building Insurance Bern are among the investors in Ambri. Furthermore, Ambri has not made any initial public offering announcements, however. The company intends to expand even further in the future.