The Jackery PowerBar 20800mAh is no longer available.

Search instead for other Jackery Power Banks

Jackery PowerBar is a robust device that is TSA-approved with a capacity of 20800mAh or 77Wh. It has multiple advantages and works as described in the user manual. It can charge the laptops via AC outlet and comes with three additional USB outputs. Therefore, you can also charge smaller devices, even simultaneously. In simple words, it’s a beast!

Jackery PowerBar is a powerful device compatible with various gadgets. It can charge the iPhone series, Galaxy series, GoPro and Digital cameras, tablets and Nintendo switches. Moreover, with the AC port, it is customized for laptops. However, it’s recommended to use it on smaller laptops such as MacBook 12″, MacBook Air 13.3″, MacBook Pro 13.3″, MacBook Pro 15″, Dell XPS 13″, Microsoft Surface Pro 4 12.3″, HP TPN-C116, THINKPAD E430. Although, I was able to charge a 17” Asus laptop. It charges laptops up to 50% which is fine because this is just what the user manual describes. With laptops using a smaller battery, it’s possible to charge them almost to 100%.

When I received the power bank, it had about 70% charge in it so to give it a good try I decided to charge it to 100% before starting to use it. I was satisfied with the charging speed of the battery itself as it got from 70% to 100% within 1h:50m. Charging a completely drained power bank from 0% to 100% took 7h:39m which is also an excellent result since the manual states it takes 7 hours total.

When I was charging my small laptop, it took two hours to get its battery from 0% to 50% and after the charger completely drained. Then, I was also charging two cell phones of Galaxy series from about 20% to 100%, and the PowerBar still had 50% of the remaining juice. In general, it charges the devices fast and holds power really well. Of course, the charging speed will vary from one device to another depending on the size and capacity of the battery, and the percentage of the charge of the gadget.
Look & Portability

This power bank has a high capacity, but it’s not too big or too heavy. It’s 6.3 x 2.5 x 2.5 inches and weighs 1.52 pounds which is adequate for a large battery of this capacity. It’s easily portable and can fit in a slim laptop backpack. However, it might be too big for a messenger bag.

When traveling by plane, this power bank can easily fit in the carry-on luggage. Not only does it fit by size and weight in different kinds of bags, but it’s also TSA-approved, and therefore, it’s allowed on the aircraft. With a capacity of 20800mAh/77Wh, it falls under the safety limit of 100Wh.

There are two useful features this power bank has. First, there is a display on it which shows the percentage of energy that the power pack has. Second, it is easy to tell when it’s on because as soon as it is, the built-in fan starts working. It is a great feature that helps cool the device and prevent it from overheating. What’s great about it is that the fan isn’t loud so it can be used even in classes or in a quiet office with no problem. It’s about as loud as a laptop fan when it kicks off higher if the laptop starts heating up. However, it can get slightly louder on a flat surface so I would recommend putting it on a couch, floor or any other softer surface if you want to prevent loud buzzing.

Another feature that I’ve discovered is that the power bank has a protection mechanism that won’t allow the battery to dangerously take on electric storage. So, to engage with a laptop, it needs to discharge to approximately 97% as it won’t do so at 99%-100%. So, I just plugged my phone for a little while to discharge the battery to 97% and then used it to charge my laptop.

Overall, this power bank looks like an extremely helpful assistant for traveling, camping, etc. It is allowed on planes and is highly portable, so it can be easily packed in carry-on luggage. With its ability to power laptops and smaller devices at the same time it is an irreplaceable power pack.

The Jackery PowerBar 20800mAh is no longer available.

Search instead for other Jackery Power Banks 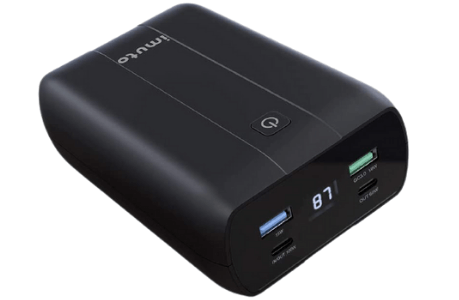 The iMuto Smart Power X6G 26800mAh is one of the best options if you need a massive capacity that can easily charge a laptop and that’s still allowed on a plane. The RAVPower 10000mAh combines two key features: portability and power output. Although small in size, it’s capable of delivering up to 29W of power. 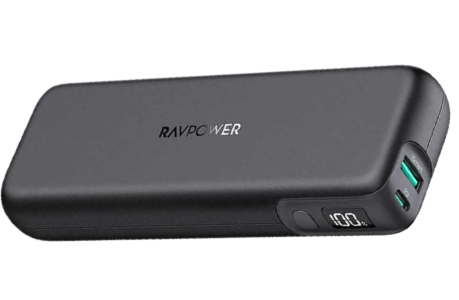