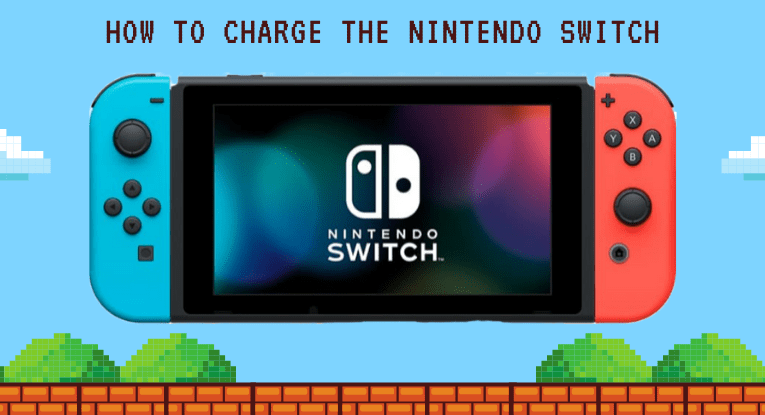 The Nintendo Switch is a remarkable gaming console that has become a favorite among gamers, thanks to the fact that it allows multiple ways to play. Whether you choose to plug it into a TV at home, play as a handheld mode while on the go, or as a tabletop to share games with friends, one thing it’s sure: The Nintendo Switch’s versatility makes the gaming experience even more enjoyable.

Although the fun might end when the battery dies, there are different ways to charge the Switch console. Thus, in this post, we’ll go through each one of them and suggest how to fast charge and extend the battery life of your favorite console.

Before we dive into the different ways the Nintendo Switch can be recharged, it’s essential to be clear in the battery capacity and power requirements of each model. We’ve already covered this topic on a previous post, the Best Nintendo Switch Portable Charger; however, here’s a brief recap:

The Nintendo Switch comes with a powerful internal Lithium-ion battery that allows many hours of gaming anywhere you are, either as a Handheld mode or as Tabletop mode. However, the battery life will depend on which of the two the Nintendo Switch models you own, and also on other factors such as the games you play, screen brightness, and volume level. The two Nintendo Switch models can be easily recognized from one another due to a serial at the back of the console.

As seen, although the battery has not changed from the original version, the battery of the new Switch lasts significantly longer (up to 2.5 more hours), which can be attributed to more power-efficient versions of the CPU and GPU chipsets. 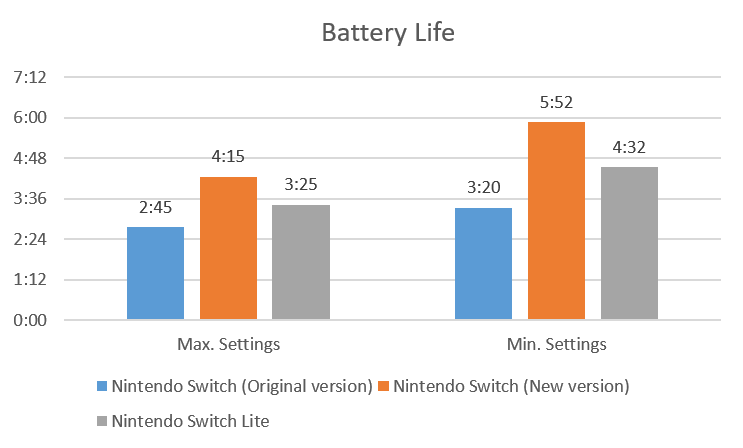 As seen in the graph, the New Nintendo Switch lasts for 4:15 hours tested under Maximum Settings (full brightness and sound, and Wifi on) and with the game Zelda Breath of the Wild, while the Original Nintendo Switch and the Nintendo Switch Lite run for 3:25 hours and 2:45 hours, respectively.

Before going through the different ways in which each Nintendo Switch model can be recharged, it’s important to know other aspects as they can help us establish the best way to charge them and pick the best chargers.

To begin with, all Nintendo Switch models feature a USB Type-C input with Power Delivery port for recharging, and it’s the first console from Nintendo to support this interface and technology.

Thanks to the Power Delivery compatibility, the Nintendo Switch can supply high power for fast-charging, as well as regulating its power consumption. It also allows role-reversal, meaning the Switch itself can charge a laptop with USB Type-C input.

Although, there’s the assumption that any high-powered USB-C charger can be used with it, as we’ll see later on, it’s not the case.

Here’s how each Nintendo Switch model consumes under the most power-intensive conditions, which include maximum brightness and sound, and with Wifi on, while running the power-demanding game Zelda Breath of the Wild. 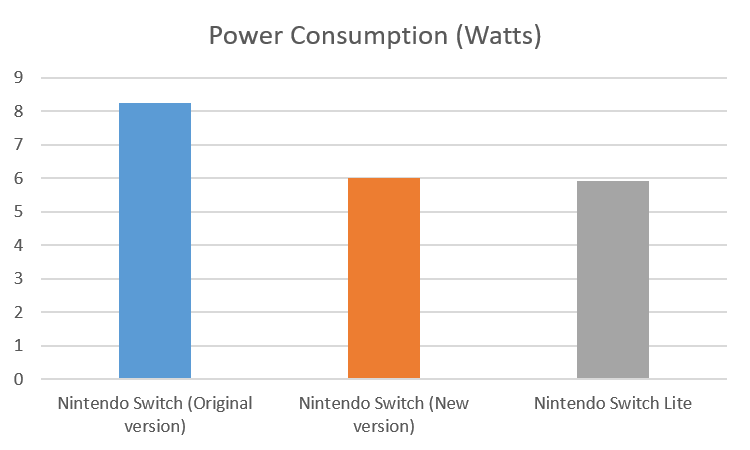 From the graph, we can see that the Original Nintendo Switch is the most power-hungry out of the three models, drawing 8.25W on average, while the New Nintendo Switch and the Nintendo Switch Lite draw almost the same power, 6W, and 5.9W, respectively.

As a result, given that both versions of the Nintendo Switch carry the same battery size, this test indicates that the new version is more power-efficient, consuming less power, and thus have longer battery life and faster charging rate.

How long does a switch take to charge?

To make things clear, the Nintendo Switch does have a maximum power it can take for charging, which is 18 Watts for both the old and new versions, and 13.5 Watts for the Switch Lite.

However, this doesn’t mean that it will draw that much power from the charger; in fact, the power draw differs considerably according to the charging conditions. 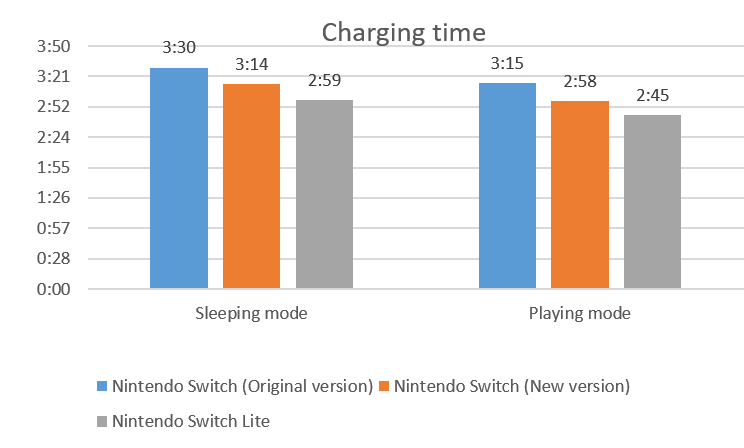 The data shown in the graph was obtained using the original Nintendo Switch AC Adapter that comes in the box to charge the consoles from 0% to 100%.

The reason for this is that both the Original and New versions of the Nintendo Switch draw 9.8W in sleep mode, and up to 12.1W with the Joy-Cons attached. Conversely, while playing both of them take up more power, up to 17.7W, which is pretty much the maximum power stated in the specifications. As for the Switch Lite, this does not take more than 13.5W while gaming, which is attributed to its smaller battery size.

The 5 options for charging the Nintendo Switch

Now that we know how much power each Nintendo Switch model draws, we can now explore the different ways these can be recharged, as well as the best charging solutions.

1. Via the AC Adapter

All three Switch models include the same AC adapter, model HAC-002(USZ). This charger is equipped with an in-built USB Type-C cable with PD for charging both the console and the Dock.

To start charging, you simply need to plug it into the port on the back of the Switch, and then plug the AC adapter directly into a wall socket.

Despite being able to supply up to 39 Watts, the AC adapter only delivers 18 Watts to the big Switch at 15V/1.2A, while the remaining Wattage is used to power the charging dock’s other USB ports. In the case of the Switch Lite, the AC adapter supplies even less, but still a maximum of 13.5 Watts at 15V/0.96A.

2. Via the charging dock

This option is designed to keep your Nintendo Switch powered in console mode while you’re playing on a TV., but thanks to its 3 additional USB ports (2 USB 2.0 and 1 USB 3.0), you can power other devices at the same time

The Nintendo Switch dock takes 39W from the AC charger, which is why the AC adapter is capable of reaching this level, but it doesn’t mean that all the Wattage is used to fast-charge the Nintendo Switch.

To charge the Nintendo Switch in console mode, simply insert it in the dock while it’s connected to the TV, making sure that the screen is facing the same direction as the front panel of the dock. Then, connect the AC adapter to the USB port of the dock that’s on the back, and finally, to the wall.

Unfortunately, the dock cannot be used with the Nintendo Switch Lite, given that its size is smaller than that of the regular Switch.

Considering that the Switch requires 18 watts for allowing simultaneous playing and charging, a power bank with USB Type-C with power delivery (PD) is needed.

In this sense, the Anker PowerCore 20100 Nintendo Switch Edition perfectly fits this profile, plus, with a capacity of 20100mAh, it has enough power to charge your Nintendo Switch 2.5 times or extending playtime for around 15 more hours.

For more about other power banks alternatives, check our previous post on the subject: The Best Nintendo Switch Portable Charger.

4. Via the charging case

A charging case is a great option since it allows you to extend the life of your Nintendo Switch so that you can play on-the-go or as tabletop mode, without the need for wires or carrying an extra device, unlike power banks.

Our pick is the ZeroLemon Nintendo Switch Battery Charger Case, a 10000mAh rechargeable case that’s capable of adding 10 extra hours of battery life to your Nintendo Switch. For doing so, you just need to slip the Nintendo Switch into it, then lock it by pressing down the top, and finally, pressing the power button for 3 seconds to start charging.

Besides the 10 extra hours of playtime, what’s great about the ZeroLemon Nintendo Switch Battery Charger Case is that it comes with an adjustable kickstand that allows 3 different playing angles, as well as featuring the right gaps to allow for airflow and accessories to be connected.

The bad thing is that it cannot be used with Nintendo Switch Lite as the size does not fit.

5. Via a car charger

This is another good option to keep your Switch power on the go, especially while traveling long distances by car. Thanks to its long cable, you can well sit on the back of the car while the charger is plugged to the car lighter.

Although this charger can be used with all three Switch models, its maximum output of 5V/4.8A means that it will take longer to charge the bigger versions of the Switch. Still, you can charge while you’re playing, but the best thing to do is to plug in it while there’s power left in your battery, avoiding that it completely dies.

Can I charge the Nintendo Switch even faster?

Like in the case of smartphones, both the charger and the device need to be fast-charge compatible, or otherwise, it will charge at a normal rate. It’s obvious by now that although the Nintendo Switch does support fast charge technology in the form of Power Delivery, it has a maximum power draw of 18W, meaning any fast charger can’t supply more than that value.

To make things clear, no matter how fast the manufacturer claims a wall charger is, it won’t work with the Nintendo Switch since its maximum power draw stat 18W.

However, there are many third-party USB-C chargers with USB-PD that can perform well with the Switch, including those that support 9V, 12V, or 15V profiles, but that deliver enough current to result in the 18 watts of power required for the most optimal and fastest charger possible.

Can you charge a Nintendo Switch with a phone charger?

If your phone charger has a USB type C output port, then you can use it to charge your Switch. But as previously mentioned, for the fastest charging time, the gaming console needs to receive 18W of power. If your phone charger cannot supply 18W, then the Switch will take longer to charge than usual. You might also not be able to charge it during gameplay if the power output is not enough. Check out our suggestions for some of the best wall chargers.

Can I charge the Switch without a dock?

Is it bad to play the Switch while charging?

You can definitely play the Nintendo Switch as it’s being charged. This is one of the key features for extending gameplay time on the console. However, you should know that doing so will result in longer charge times. Also, the console might get warmer than usual, which might shorten its lifespan if done on a regular basis. If you’re playing while charging only once in a while, then you have nothing to worry about.

While there’s no single charger that can supply the Nintendo Switch with more power than what it’s designed to take, it’s still possible to choose a charger that will perform slightly better than the original AC adapter. To do so, just ensure to use an18W USB-C PD charger that offers 12V or 15V if you intend to use to charge the Switch directly off the wall. But if you want to use it on your dock as well, PD chargers over 30W are the best option.