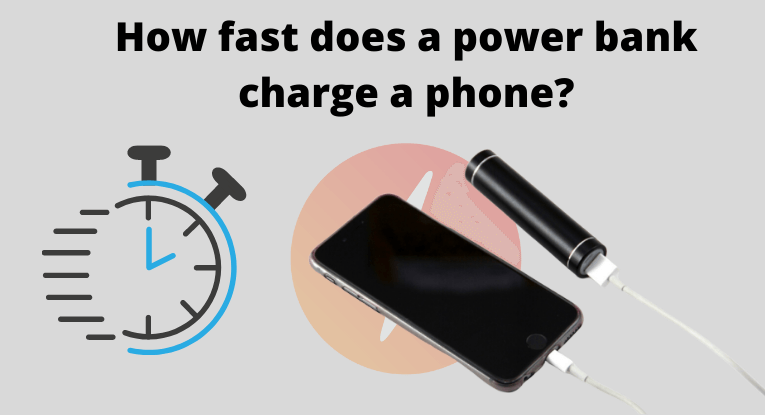 Since the emergence of portable devices, charging speed has been a primary focus, even more so with power banks. Charging speed is important since we live in a fast-paced world where devices such as phones have batteries that are larger than 4000mAh.

How fast does a power bank charge a phone?

Note that it is impossible to accurately predict the period of time batteries will take to charge. Therefore, all the statistics on power banks and phones are merely estimates based on the data collected. As for whether or not a power bank would slow down the charging process, it depends.

To be more specific, the output of the power bank and the input of the phone are the two factors that affect charging speed. Hence, using a power bank with an output power that meets the maximum input power of your phone will result in a quick charge for your phone.

As an example, if you’re currently charging a phone in 1.5 hours with a wall charger, you’ll be able to do the same with a power bank if it’s capable of providing your phone’s maximum input power.

For example, the power bank should be equipped with Qualcomm’s Quick Charge technology, or at the very least have a high power output, and your phone should be capable of handling the power that flows from the power bank. Your phone will charge quite quickly in this case.

The number of ports on power banks varies, allowing customers to choose according to their own requirements. Each output port may have a different power output, which will result in a difference in charging speed between the other ports. It is important to read the power bank’s manual to discover which one has the highest output power and supports rapid charging technology if the manufacturer does not mention it on the port.

Following that, charge the phone using that port in order to achieve the fastest charging speed possible. It is worth noting that, due to the nature of USB-C, these ports are capable of delivering significant amounts of power.

As a result, we recommend using the cable that came with your power bank or phone because it is designed to transfer a substantial amount of electricity. In addition, make sure that the cable is hooked to the most powerful output port on the power bank.

As a result of the chemistry of lithium batteries, extreme temperatures, whether hot or cold, cause portable devices to perform poorly and charge more slowly.  For example, you should not expect your phone and power bank to charge as quickly as they would at room temperature if you leave them in direct sunlight in your car.

If you have one of those large phones that you need to use with both hands, it is most certainly has a large battery to keep it working for at least a day. The rules are simple: as the capacity increases, so does the time it takes to charge.

Using the phone while charging

Using your phone while charging it with a power bank reduces the charge speed, and this rule holds true even if you charge your phone with a wall charger. Not only does this charging practice have a negative impact on the phone and its battery, but it also increases the time it takes to charge the phone because the phone consumes some of the power received.

Pass-Through charging is a feature that manufacturers include in some of their power banks. This technology allows you to charge both the power bank and the connected gadgets at the same time. Although Pass-Through charging is convenient when there is only one power outlet available, such as at an airport, it might cause the charging process to be noticeably slower than usual.

Does a wall charger charge faster than a power bank?

If you’re wondering if a power bank charges a phone more quickly than a wall charger, the answer is yes. However, as portable gadgets got more popular, the need for backup batteries increased, leading to the advancement of power banks.

Thus, it is acceptable to conclude that power banks have improved to the point where the difference between charging a phone with a power bank and charging it with a wall charger is minimal.

How many times can you charge your phone with a power bank?

Because of the lithium chemistry used in their construction, power banks have a lifespan of 4-5 years and can hold a charge for around five months on average. However, the capacity, power output, and the number of output ports of a power bank, among other factors, impact how long it will last charging a device.

Based on capacity alone, a power bank with a capacity of 10000mAh could be able to charge a device for around 10 hours. In other words, you can expect to charge an iPhone 12 nearly 2.3 times and a Samsung Galaxy S20 approximately 1.6 times. With a 20000mAh power bank that has a capacity of up to 20 hours, you can charge an Apple iPhone 13 approximately 4.5 times and a Samsung Galaxy S20 roughly 3.2 times.

The number of output ports on the device is the next most important factor in determining how many times you can charge your phone with a power bank. Why? With more devices connected to the power bank, the electricity in the power bank will flow via several ports, causing the battery to discharge more quickly.

Why do some power banks take longer to charge devices?

There are a number of reasons why a power bank charges at a slow speed. One of the causes for this is the power bank’s poor charging architecture. These power banks are often outdated, and as a result, they are not equipped with new charging technologies that increase the pace at which the battery can be charged.

However, suppose the power bank is brand new, and it is equipped with charging technologies. In that case, we recommend that you inspect the cable to ensure that it is of high quality and capable of transmitting a substantial amount of energy.

Another possibility is that the port on the power bank or other devices has been blocked with dust and dirt over time. Once it has been thoroughly cleaned, you can expect to enjoy the actual charge speed. Finally, make sure to follow the keynotes provided in the Factors that influence the charging speed of a power bank with a phone subsection to learn more about other possible causes.

Is it safe to charge your phone with a power bank?

Power banks are designed in such a way that they do not cause damage to the devices to which they are attached since they are used to charge any kind of USB-powered device with different input powers. Therefore, power banks are entirely risk-free.

If we delve into further depth, manufacturers include safety features in power banks as well as lithium batteries to regulate voltage and current, resulting in safe charging. In power banks and chargers, these safety technologies communicate with the devices in order to identify the maximum amount of power necessary and then deliver it, preventing excessive voltage and current from damaging or frying the item.