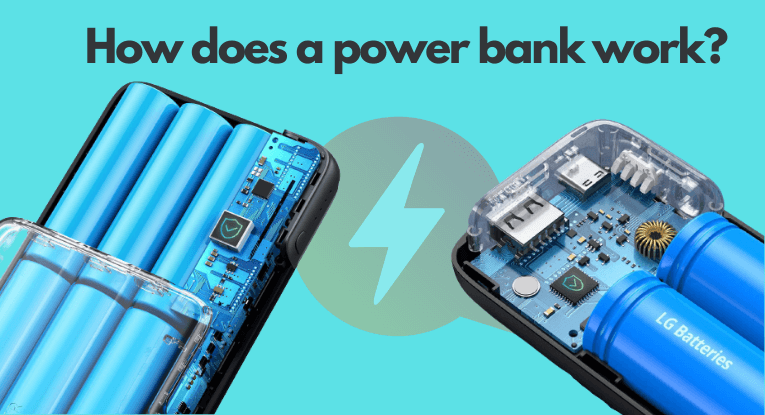 Power banks are essentially batteries with smart circuitry that regulates current to charge USB-powered gadgets safely. Because power banks are intended to be portable, their batteries are made of lithium chemistry, which stores a large amount of energy in a small size.

How does a power bank work?

Some aspects of the power bank’s operation, however, are distinct from those of rechargeable batteries. Power banks store a significant amount of electrical energy inside to be available when needed. The specifically designed case houses a lithium-ion or lithium-polymer battery, charger, and a circuit breaker to control the power flow. This power control will help ensure that the energy or “charge” is not drained, allowing you to use the power banks as a power source for charging when your device is running low and there is no outlet to charge your device.

The smart technology used in power banks will only charge your battery as needed, saving its power and making sure that it doesn’t overcharge your device. Additionally, the smart circuit protects the power bank and the devices it charges via the USB ports against charging risks such as over-current, over-voltage, overheating, over-discharge, and short-circuit.

Thanks to built-in USB ports, power banks are compatible with any USB-powered gadget. For example, the iPhone’s Lightning cable has two ends: one connects to the phone, and the other is a USB port. As a result, it is perfectly compatible with power banks.

The way power banks work is by having built-in lithium-ion or lithium-polymer batteries produce power through a USB port, which allows for the energy to be transferred to multiple devices that have run out of battery.

Power banks are also rechargeable via the same USB port, making them reusable time and time again. It’s worth mentioning that power banks have a lifespan of around 500 charge and discharge cycles before performance degrades owing to the lithium chemistry. To name a few of the other terms for power banks, we can refer to battery banks, battery packs, and fuel banks.

Why are power banks rated at mAh instead of Wh?

Since the capacity of a battery is measured in (m)Ah, it would not tell you much unless you knew the voltage. However, having products with the same terminal voltage for comparison would allow you to simply ignore the voltage and focus on the capacity expressed in Amp-hours. Given that the rated Amp-hours is the amount of current that the device can output for 20 hours at room temperature, it can be misleading. The actual output can significantly differ if the current draw is notably higher or lower or if it is being used in extreme temperatures. An important point to take note of is that since batteries don’t maintain their rated voltage forever, not all of the mAh may be usable.

Another factor to take into consideration would be the efficiency of the DC-DC converter. For example, if you want a 5V output from a 3.7V battery, the voltage would need to be stepped up. While they can be extremely efficient, there are still losses at hand. Very loosely speaking, the lower the input voltage, the lower the efficiency will be. To conclude, factors such as cell voltage, discharge rate, temperature, DC-DC convertor efficiency, etc., can affect the power bank’s actual usable energy.

Do power banks come pre-charged when we buy them?

If I don’t use the power bank for a while, does the battery run out?

Yes, eventually, the battery will run out. Over time, if a battery sits on a desk, not plugged to anything, it will slowly lose its charge due to internal self-discharge. However, since portable chargers run on die-hard lithium-ion cells, the process would be slow and might even take years to discharge.

In a power bank, a battery is installed, constantly keeping it connected to a load. Usually, there would be some sort of battery monitoring circuit that would continuously consume a little bit of power. Some power banks have a button that turns on the output circuitry, which would also consume a small amount of current. The power bank is likely to retain its charge for a year or more if those were the only loads.

There are power banks that have 5V constantly applied to the outputs, meaning that a button is not needed in order to turn on the output. Since there is no button controlling it, this type of output circuitry would draw more power, even with nothing plugged in. This type of power bank design would fully discharge within a few months.

However, none of these things would matter if you use and recharge your power bank on a regular basis, whether it be weekly or monthly. If you charge it and stash it away for emergencies, you may find that after a year, the power bank would be dead. For emergency purposes or occasional use, the better option would be to purchase a power bank device that is powered by four single-use AA batteries. The mechanical switch would not draw any currents when off, allowing a set of alkaline AAs to last up to 5 years if left unused.

Is it ok to charge a lithium-ion battery from a lithium-polymer power bank?

First, let us clarify that lithium-polymer batteries are technically lithium-ion batteries packed in flexible polymer instead of conventional solid cells; hence they are called lithium-ion polymer batteries. In addition, the control circuit regulates the output so you can safely charge any device that runs on 5V voltage. In other words, the devices that you charge can’t tell the difference as long as you feed them the proper voltage and current flow.