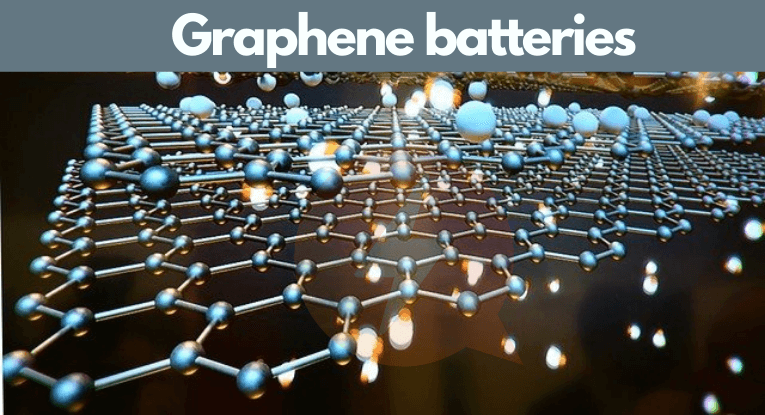 Batteries have become a necessary element we need to conduct our everyday lives. However, graphene batteries are currently the subject of a lot of hype. What does the future hold for rechargeable battery technology?

What are graphene batteries?

Before we go through the graphene batteries, let’s take a look at the graphene first. Graphene is a carbon allotrope consisting of a single sheet of pure carbon atoms linked together in a hexagonal lattice arrangement with sp2 bonds. To simplify, graphene is a one-atom-thick (0.345Nm) layer of carbon. In fact, graphene is 2-dimensional. In graphene, carbon-to-carbon bonds are strong, small, and fully stable. Importantly, graphene can be seen with the naked eye despite being mostly transparent. In addition, the characteristics of graphite alter at the nanoscale, giving graphene outstanding properties.

Because of its numerous remarkable properties, graphene is widely regarded as a “wonder substance”. It’s environmentally safe and long-lasting, with boundless potential for a wide range of uses. Graphene might be the substance that will replace classic lithium-ion batteries, which have been used by the technology sector for decades. Graphene is 140 times faster than lithium in transferring electricity while being 100 times lighter than aluminum. This suggests that a conventional Li-ion battery’s power density might be increased by 45 percent.

Graphene batteries are now being researched for a wide range of commercial uses because they are long-lasting, light, and ideal for high-capacity energy storage. The operation and layout of graphene batteries are similar to that of regular batteries, which require two electrodes and an electrolyte solution to assist ion transport. These batteries are the newer technology that allows for faster cycle times and higher electrode density. This scenario, which currently appears to be a work of fiction, could become a reality if graphene batteries, a material with virtually miraculous properties, live up to their potential.  In this context, they are garnering attention outside of the startup sector.

Graphene batteries utilize two conductive planes covered in a penetrable substance and absorbed in an electrolyte catalyst, similar to Li-ion batteries. Despite the fact that their internal makeup is very related, such battery technologies have distinct features. A graphene battery’s internal structure is quite similar to that of a regular lithium-ion battery.

Currently, lithium-ion batteries are the most popular type of battery, but this appears to be changing. Although lithium-ion batteries have significant advantages, they also have drawbacks that must be considered. Lithium-ion batteries can have issues with safety, durability, uniformity, and cost because of their high capacity and big serial parallel numbers. It can also be over-charged or over-discharged, impacting performance over time. Another concern is transportation, as lithium-ion batteries pose a shipping hazard. Is there, then, a more efficient option?

In short, the benefits of graphene battery over lithium-ion battery:

In 2002, two Russian researchers won the Nobel Prize for discovering graphene. Following that, scientists Maher El-Kady and Ric Kaner were looking for a better technique to make the super-strong material when they came with another holy grail, the ‘supercapacitor‘. This graphene supercapacitor is a battery-like technology that is biodegradable and efficient.

Graphene supercapacitors have the potential to change the world. Supercapacitors are a new type of energy storage device that offers great power density, near-instant recharge, and extremely extended lives. For instance, they can charge up to 1000 times faster than a regular battery. Currently, they are fast progressing from lab prototypes to finished products. In the not-too-distant future, this will complement, if not compete with, commercial batteries. This is due to significant improvements in their characteristics and performance during the last decade. Graphene foam, laser reduction, and micro-supercapacitors are the three technologies that have had the greatest impact on their progress.

How Graphene will impact smartphones and power banks

Graphene is a wonder material with a dizzying array of potential technical uses. It can also significantly boost the efficiency of smartphones and power banks.

Smartphone PCBs using graphene transistors can be extremely efficient and powerful. The unusual structure of graphene, for instance, creates a zero-overlap semimetal in which both electrons and holes act as charge carriers. This property, combined with ballistic conductivity, speeds up and improves the efficiency of electrical charging. Furthermore, this characteristic enables graphene-based transistors to run at 300 GHz, or 30 times faster than silicon-based transistors. Furthermore, graphene transistors are substantially smaller, resulting in more efficient electronics.

Battery size and capacity have long been a source of frustration for both consumers and manufacturers. Imagine being able to charge your smartphone battery in a matter of minutes and having it last the entire day. For example, a graphene battery with a capacity of 6000mAh is predicted to charge in less than 30 minutes. Samsung is still planning to release at least one flagship handset with a high-capacity graphene battery by 2021.

Graphene is said to have improved the performance of power banks significantly. As a result, graphene is poised to take over the power bank market. In real-world applications, graphene enables power banks to significantly shorten charging periods. So, rather than waiting hours for your power bank to be refilled, they could be able to accomplish it in a matter of a few minutes. Additionally, new technology may allow power banks to expand their capacity without increasing their size or weight, allowing them to become more powerful while remaining portable.

Other advantages of graphene power banks can be found. They operate at a lower temperature than lithium-ion batteries, and the manufacturers (Samsung, CellsX, and so on) claim that they may be recharged 1,000 times before reaching the end of their useful life. Typical power banks have a recharge cycle life of three to five hundred times. By today’s power banks specifications, 5,000 mAh isn’t enough. A large contemporary smart (such as the iPhone 12 Pro Max) can be charged once, whereas a smaller smartphone can be charged twice. However, since the focus of these power banks is on raw capacity, portability, and charging speed, thereby, this is a reasonable compromise.

When will graphene batteries be widely available?

Graphene batteries don’t have a significant market presence right now, but things are slowly evolving. For instance, some companies are using graphene to enable innovative battery casings or increasing the temperature range of the battery (see Huawei’s graphene battery announcement in 2016).

Meanwhile, it appears as Huawei has finally joined the battle since the company recently certified a new design patent published by China’s State Intellectual Property Office. Polystyrene, sodium alginate, polyethylene glycol, polyvinyl alcohol, starch, and other binder materials are used as well as graphene as a conducting material, according to the patent. Graphene makes about 0.1 percent to 10% percent of overall mass, with graphene particles measuring 5nm to 50nm in thickness and a D50 element shape of 50 nm to 5000nm.

Furthermore, Australian scientists with expertise in aluminum-ion batteries are collaborating with Brisbane-based Graphene Manufacturing Group to develop a technology that has the potential to revolutionize energy storage. The University of Queensland and Graphene Manufacturing Group aren’t the only ones making advances, though. Scientists from the Dalian University of Technology in China and the University of Nebraska in the United States worked in March 2021 to fabricate a battery with a pure aluminum anode, graphene cathode, and organic electrolyte. By 2025, the worldwide graphene market is expected to rise to 1479 million USD. However, the most advanced graphene battery solutions will necessitate a significant investment in research and development and will take many years to market.

Graphene batteries stocks to look out for

Graphene stocks have been rising steadily since the end of 2020, and the trend is expected to continue in 2021 for the majority of companies. NanoXplore, a graphene maker, has announced that its common shares have begun trading on the Toronto Stock Exchange (TSX). However, there are graphite reserves that might be mined elsewhere in Canada and the world. If prices rise sufficiently, these deposits could be brought into production.

With such enormous potential, major and small organizations will inevitably be investigating ways to broaden the spectrum of the material’s applications and make money by commercializing graphene’s applications. As a result, opportunistic investors will be looking for ways to invest in graphene stocks or stocks of companies involved in graphene products, graphene-based research, or industries centered on graphene.