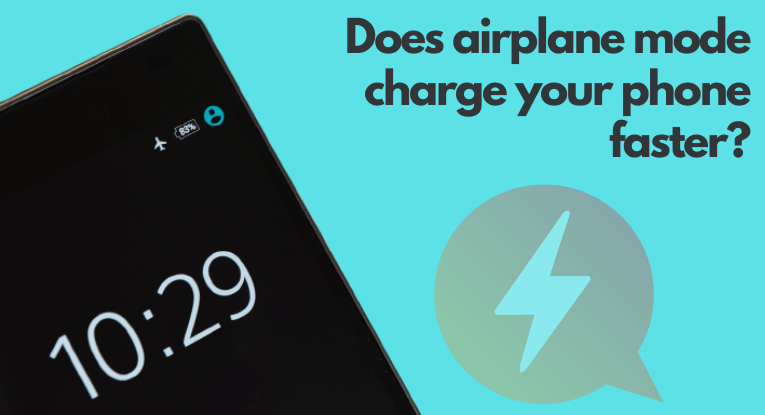 Yes, using airplane mode will speed up the charging process. This is because the cellular, Bluetooth, and Wi-Fi features consume the battery in the background, but when the airplane mode is on, those features are deactivated, resulting in the phone charging more quickly.

Due to the charger’s fast charging speed and the low power consumption of these features in standby mode, the difference in charging while the airplane mode is On and Off may be unnoticeable. However, when we’re pressed for time, we all understand how critical even a minute or two is, and getting a few additional charge percentages would make everyone pleased.

In addition, it’s worth noting that if you have a poor cellular connection and are too far away from a cell tower, the cellular feature will send and receive too many signals to maintain the connection, resulting in further battery loss. As a result, if you’re driving a car and traveling in the middle of nowhere and charging your phone with a power bank or car charger, enabling airplane mode can significantly speed up charging.

As previously mentioned, the charge speed is relatively fast nowadays, which helps compensate for the amount of battery power consumed by cellular, Bluetooth, and Wi-Fi functions. But when operating in the background, these features produce heat, which also slows down charging. If you want to see how much battery your phone consumes while in standby mode, navigate to Battery settings and look at the Cell Standby power usage.

Is it good to charge your phone on airplane mode?

Yes. Apart from the fact that charging the phone while in airplane mode has no negative consequences, there are numerous hidden perks. Given that we all want a fully charged phone when we wake up, we charge it overnight and keep it near our pillows so we can hear the alarm when it rings. While you are probably aware that overnight charging can result in battery degradation, there is more to it than that.

When you switch off your phone, the signals are no longer sent or received, and there is no radiation surrounding the phone, which is beneficial to our health. Unfortunately, most people feel that turning the phone off and on again is annoying and avoid doing so. In this situation, the airplane mode comes into play. You can achieve the same result by simply activating the airplane mode on your phone, which will protect you from harmful radiation. Additionally, the mobile phone alarm clock can be used after enabling this feature.

According to some, turning off the airplane mode results in a decrease in network quality. In this case, re-enable airplane mode, wait a few seconds, and then deactivate it. This causes the phone to re-search for a signal and a network, which has the same effect as restarting the phone but takes less time.

Does turning off your phone make it charge faster?

Yes. Due to the fact that airplane mode disables radio capabilities in order to reduce battery usage and speed up charging, a similar situation occurs even when the phone is switched off. However unlike airplane mode, while the phone is turned off none of the phone’s features use battery power, resulting in significantly faster charging compared to the phone on airplane mode.

Other tips to charge your phone faster

Use a high-quality wall charger and cable

Phones are powered by lithium-ion batteries, which are very temperature sensitive. As a result, if you want to prolong their life or charge them faster, you must keep them at operating temperature. In some cases, the phone gets hot when charging, which is exacerbated if the phone is protected by a protective case. As a result, we recommend that you remove the case to prevent the phone from becoming too hot, which will allow you to charge more quickly.

Don’t use your phone while charging

When you use the phone while it is charging, a portion of the battery is consumed in order to keep the phone functional, resulting in the battery charging at a slower rate. Also, the time of the charge is based on the apps that you are using while charging. When a resource-intensive app, such as a game, is running, the charging process takes longer to complete compared to a non-resource-intensive app. Furthermore, using the phone while it is charging causes the phone to heat up. As previously mentioned, heat has a negative impact on lithium-ion batteries; consequently, you should avoid using the phone while charging.

While wireless charging has made tremendous advances in recent years, it has not yet been able to match the charging speeds of traditional cable charging. If you want to charge your phone rapidly, you should sacrifice the convenience of using a wireless charger in favor of using a cable charger.