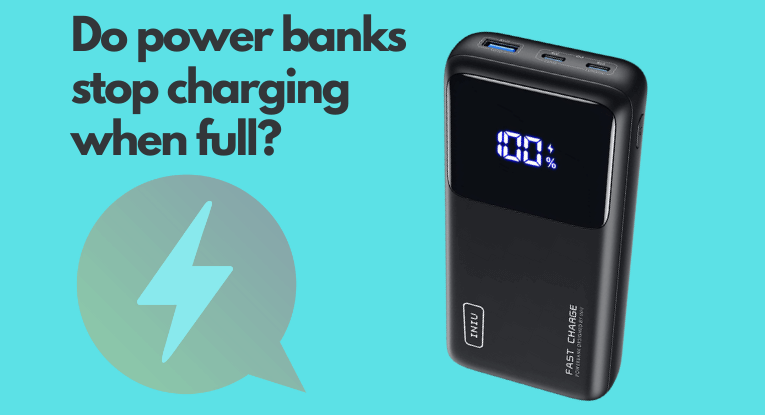 Most power banks do stop charging after reaching their full capacity. In recent years, manufacturers have been acutely aware of the threats related to portable lithium products, particularly power banks, and have decided to incorporate smart circuits.

To put it into context, when a battery is charged over its capacity, it heats up, which is when the smart circuit’s A NTC-resistor comes into play. When the temperature increases, the resistance of this resistor decreases. So, let’s assume the current flowing through the NTC increases as the temperature rises. The NTC is connected to the charge regulating unit, detects the change, and responds by interrupting the charging process.

It’s worth noting that you should always purchase power banks from a reputable brand and avoid low-cost options since unknown manufacturers may lack safe charging features. Additionally, even if the manufacturer incorporates this capability, the smart circuit may malfunction due to poor manufacturing quality, causing damage to the power bank and connected devices. These power banks are very dangerous and should never be left charging overnight. Always keep an eye on them while using them, even more so if you’re bringing them on flights.

Although security mechanisms have significantly reduced the risk of power banks catching fire or exploding, there is still a slight possibility of them catching fire or exploding. These dangers can happen for many reasons, including poor build quality, poor battery quality, and improper use. As a result, we previously advised buyers to avoid purchasing items from unknown companies and stick to well-known brands.

Furthermore, due to the high cost of manufacturing lithium batteries, many manufacturers try to reduce costs by using cheap or recycled batteries. Unfortunately, these batteries significantly increase the likelihood of the power bank catching fire or exploding. Last but not least, if you leave your battery in direct sunlight or squeezed it inside your bag, the power bank may explode due to improper use. Therefore, we advise caution while using battery-powered devices, such as power banks.

Is it safe to leave a power bank always charging?

Yes. It is safe to leave power banks charging continuously due to the safe charge protections offered by the intelligence circuit. However, you should always avoid unknown brands and cheap products because the manufacturer may have overlooked the feature, or the integrated smart circuit may be of poor quality. Also, keep in mind that constantly charging or completely discharging the power bank drastically lowers the battery’s lifespan. Consequently, the best charging habit is to start charging the power bank at 15% and stop charging when it reaches about 85%.

Signs of an overcharged power bank

Although the likelihood of overcharging a power bank is very slim, if you notice that the capacity of the power bank has decreased (for example, you can no longer charge as many gadgets as before), this is a sign of an overcharged power bank. The next sign is excessive heat generated by the power bank while recharging and charging. While overheating during charging is common, it should not reach an alarming level.

The other symptoms are a little simpler to notice; all you have to do is thoroughly check the power bank. If the shell has swelled or bulged, this indicates that the battery has been damaged due to excessive charging. Moreover, if you smell smoke, the internal circuits have most certainly been damaged, or the battery has been overcharged. Lastly, we recommend that you stop using the power bank if you notice swelling, burnt smell, or excessive heat.