The CR123A is one of the most popular batteries for a good reason. Despite being shorter than AA batteries, they have a higher capacity and generate 3 volts, which is double the voltage of AA batteries. In addition, due to its high power-to-size ratio, this battery outlasts the majority of batteries in its class. As a result of this advantage, CR123A batteries are well-suited for high-power devices, such as cameras and LED flashlights with relatively small battery slots.

The dimensions of CR123A batteries are 34.5 x 17mm, or 2/3A cell size, and the chemistry is lithium (LiMnO2). This battery is known by various names, but it is also referred to as a camera battery because it is commonly used in cameras. Aside from cameras and flashlights, they are used in toys and torches as well.

Single-use or non-rechargeable CR123A batteries typically have a nominal voltage of 3.0 volts and a capacity of around 1500mAh. These batteries are ideal for standby devices such as flashlights.

This Panasonic battery features Photo Lithium technology, making it ideal for devices that consume a lot of power, such as cameras and flashlights. Apart from the cameras’ high power consumption, if you’re photographing in the dark, the flashlight will require a significant amount of power to operate properly, which Panasonic CR123A batteries with a capacity of 1300mAh will provide. Notably, this battery has a low internal resistance, which enables rapid flash recovery and shooting.

Panasonic CR123A is ideal for devices such as cameras and portable lighting systems because it is lightweight and adds minimal weight to the device, making it easier to carry.

There is no need to be concerned if you intend to use the Panasonic CR123A in a harsh environment in terms of temperature, as this battery is safe to use in temperatures ranging from -40°C to +70°C.

While self-discharge is a disadvantage of single-use batteries, Panasonic’s CR123A batteries have a longer shelf life and less self-discharge due to the materials used in their construction.

This battery can be used in security systems such as smoke and motion detectors, in addition to cameras and flashlights.

This single-use battery has a shelf life of 10 years and a minimum self-discharge, and it comes in a pack of 12 to ensure you never run out of battery.

If you own a Streamlight flashlight, the 85177 CR123A Lithium battery from this brand is the best option; however, this battery can be used in other brands of flashlights and cameras. The Streamlight 85177 CR123A comes in a pack of 12, making it an excellent choice for those who enjoy camping in the great outdoors. Each battery contains Lithium Manganese Dioxide, which ensures long-term reliability and a 10-year life span. The only drawback is that these batteries are not rechargeable.

Positive Temperature Coefficient (PTC) protection is built into the Streamlight 85177 CR123A lithium batteries, which successfully eliminates the issue of excessive discharge. Excessive discharge of batteries has the potential to cause catastrophic device damage.

Heqi has introduced the KB-M7 with four rechargeable lithium batteries. This product is compatible with Arlo security cameras VMC3030,VMK3200,VMS3330, 3430, and 3530. The batteries feature anti-self-discharge technology and last 21.8 percent longer than standard CR123A Lithium batteries. According to Heqi, this product has a capacity of 800mAh, which is more than adequate for everyday use. Additionally, this product can be recharged up to 650 times, allowing you to save money over time compared to single-use batteries.

This charger supports 2A current and allows you to charge the batteries in 2 hours. The company has embedded four LED indicators to inform the user of the battery charge status; when the red light turns green, the batteries have fully charged. The safety aspect has also been considered in order to prevent any damage to the batteries, charger, or any device to which they are connected. It will detect any short-circuit, over-charge, over-current, over-voltage, or reverse direction. Furthermore, the charger complies with UL, CE, FCC, and RoHS certifications. In addition to the built-in USB cable for charging the batteries via any device with a USB port, it has type C and Micro input, which expands the options provided by this charger.

Tyrone CR123A rechargeable batteries and charger are yet another excellent choice for those who use security cameras. If you have a lot of those cameras, you’ll need to charge a lot of batteries at the same time, and this product with eight battery slots can come in handy. Each slot has its own LED indicator; if the red light is on, the battery is charging, and if the green light is on, the battery is fully charged and ready to use. It should be noted that CR123A batteries can still be used in other devices such as a calculator, adapter, camera, and torch.

Correct usage can help maintain the battery’s health and extend its service life; therefore, charge the battery within five days of running out to avoid over-discharge.

Each Enegitech CR123A rechargeable battery includes Pressure-Temperature-Current protection, which is a cutting-edge battery safety technology. PTC protection prevents the battery from overheating during charging or use, which increases its security. These batteries are compatible with any device with a CR123A battery slot, including cameras, flashlights, digital cameras, camcorders, electronic toys, calculators, and alarm systems. Additionally, the batteries are not susceptible to the Memory Effect. This problem occurs when the battery is repeatedly recharged, causing the battery to hold less charge.

How long do CR123A batteries last? 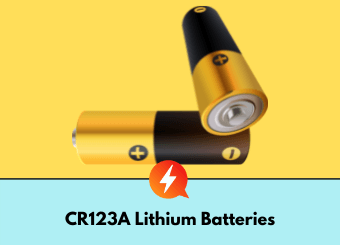 The length of time any battery will last depends on a number of factors, including the device’s battery consumption, the intensity with which the device is used, the ambient temperature, and so on. CR123A batteries are primarily used in cameras, security systems, and flashlights. Therefore, their lifespan is determined by how frequently they are used, except for security systems, which are constantly in use.

If you use a CR123A battery in an alarm sensor, it can last three to five years; however, some models use more or less power, which affects the lifespan. On the other hand, cameras can consume significantly more power in the dark due to the use of a flashlight. The continuous shots with the flashlight may also play a role here. Overall, the length of battery life is determined by your device and how you use it.

The CR123 and CR123a are named logically. The letter C symbolizes lithium, the letter R stands for round, and the number 123 represents one-third. As a result, any 123 battery is one-third the size of an A cell battery. Some companies will add an a/A to the end to signify the A cell.