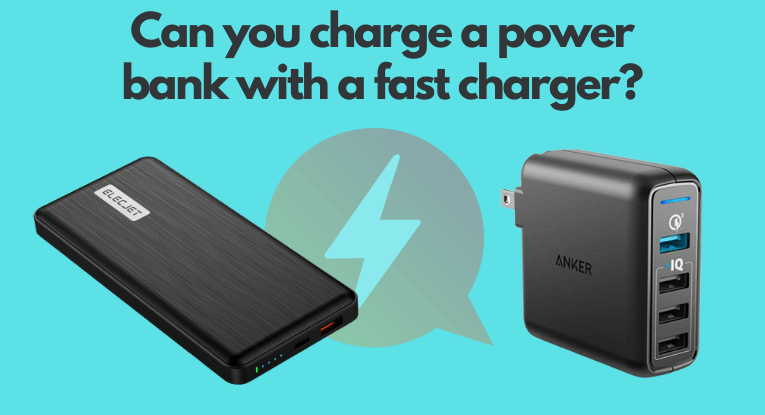 Is your power bank lacking quick charge capabilities? You can still charge it faster if the device supports higher power input, but this is not comparable to the charging speed offered by fast charging technologies.

All you have to do is look at the product’s listings on the website from where you purchased it, or put the brand and model into Google and then browse to the company’s website. You can also read the user manual that comes with the power bank.

Although USB-PD technology is compatible with Quick Charge 4 and newer versions, Quick Charge 3.0 and previous versions will not work with anything other than Quick Charge-certified devices.

A TurboPower equipped device does not require a proprietary adapter to fast charge, similar to Samsung’s Adaptive Fast Charge. Instead, you can use any Quick Charge 3.0 adapter with Motorola’s charging standard. It is worth noting that there are three types of TurboPower adapters: TurboPower 15, 25, and 30.

Warp Charge, like VOOC, is a proprietary technology that works exclusively with OnePlus phones, compatible wall adapters, and car chargers.

Huawei’s Smart Charge protocol automatically switches between charging modes based on the plugged-in charging adapter and device, and as a result, it is USB-PD compatible. While purchasing a suitable wall adapter is required to take advantage of Huawei’s SuperCharge technology, native compatibility with Qualcomm’s Quick Charge standard means that any SuperCharge-compliant device can also benefit from Qualcomm’s Quick Charge.

Anker’s new processors enable the USB-C ports on its chargers and power banks to support Qualcomm Quick Charge 3.0 and Power Delivery up to 100W, allowing them to charge almost any USB-C device at the fastest possible speed.

USB Power Delivery (USB PD) is a relatively new fast charge standard that the USB Implementers Forum introduced, the creators of the USB standard.  Apple and Google both incorporated Power Delivery technology in their devices. They have, however, made modifications to the technology; for example, both companies use a different connector type. Unfortunately, other charging technologies are incompatible with Google Pixel and Apple devices.

However, Qualcomm has confirmed that its Quick Charge technology is compatible with USB PD PPS (programmable power supply).

A charger’s output is specified by amperage and voltage. The amperage (or current) represents the amount of electricity going from the battery to the connected device, whereas the voltage represents the strength of the electric current. Volts multiplied by amps equals watts, which is a unit of total power.

To improve the rate at which a device charges, most manufacturers either raise the amperage or adjust the voltage. However, rather than increasing amperage, the majority of rapid charging standards vary the voltage.

Can charging via a fast charger damage the power bank battery?

No. Due to the risks that come with batteries, particularly lithium batteries, manufacturers are constantly working to improve their safety. Because of these advances, batteries are now safe for fast charging, whether in smartphones or power banks.

To charge your power banks as quickly as possible, follow the guidelines listed below.

Charge with a compatible charger and cable

In order to charge any gadget, in this topic a power bank, more quickly, it is required to use a charger that is compatible with the item. As previously noted, the charger must be compatible with the devices. When you use these chargers, you will be able to take advantage of the quick charging features that are built into each of these items. If you’re planning on purchasing the wall charger and charging cable separately, consider the following: In that case, you should also buy a cable that is capable of transmitting the power from the charger. Otherwise, you will not be able to take advantage of quick charging.

Never use low-quality or cheap items, especially if they are counterfeit, because they almost never deliver the level of power that is stated on the product or packaging.

Pass-through charging refers to a power bank’s ability to be recharged while simultaneously charging the connected devices. While concurrently recharging a power bank and your devices may save time in the airport, you should be aware that the power bank’s recharge speed will be reduced.

Lithium batteries are extremely temperature-sensitive, which affects their performance. As a result, always use your power bank and other battery-powered devices at operational temperatures to avoid damage and to maximize battery charging speed.

Use the high-power input port

Some power banks are provided with two or three input ports, depending on the model. Reading the user manual to figure out which one accepts the highest input and is also equipped with charging technology, then recharging the power bank with that one is the most efficient way to charge it quickly.