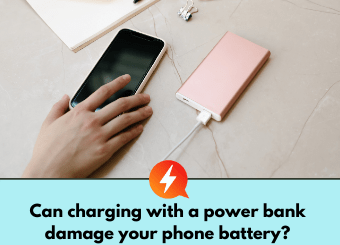 Generally speaking, you should not worry that using a power bank might damage your phone battery. Both power banks and mobile phones have safety systems in place which are created to prevent any type of negative influence upon the phone battery as it’s being charged.

Some of these safety measures are overcharge protection, over-discharge protection, or short circuit protection. In the end, a power bank acts just like any other power source for your phone. From this point of view, it’s no different than the power supplied by the phone’s wall charger.

BUT, and there’s always a but, in some extreme, very unlikely cases, some accidents could happen. As with a faulty wall charger coupled with a faulty phone, so do power banks have the potential to cause some damage. Usually, this happens with very low-quality power banks and also in conjuncture with a phone error too.

For example, phones are designed to accept a power input between 5.1V and 5.4V. Under normal circumstances, safety mechanisms in both the power bank and the cell phone, keep the power in this range. However, if some of these safety features end up malfunctioning, then the power that reaches the phone battery can be larger than needed. In this case, the battery can get damaged.

Besides an inadequate power supply, another factor that might affect your phone battery life is heat. If the phone gets really hot during charging, then the extra heat will increase the internal resistance of the battery, which will lead to longer charging times, which have a direct effect upon the lifecycle of the battery. So if you notice that while charging with a power bank your phone gets unusually hot, it’s better if you’d get a new portable charger.

Please note that heat can also be increased by other factors too. For example using the phone while charging it, or having it covered while it’s being charged. In these situations, the phone will get hotter than usual. So before deciding that the power bank is at fault for the extra heat, make sure there aren’t any other contributing factors.

Tips for making sure your phone battery does not get damaged

Although it’s highly unlikely for your power bank to damage your phone battery, you can still take some safety measures just in case:

That being said, remember that it’s very rare for a power bank to damage your phone’s battery. So try not to give this unlikely occurrence too much thought. But since you’re here, you might be interested in these articles too: