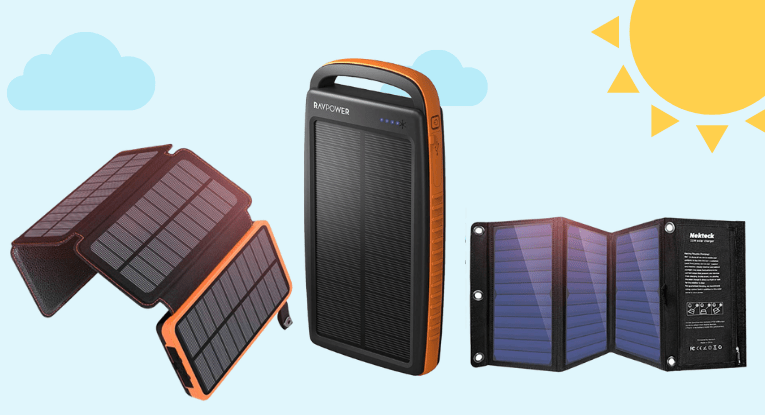 The first type of solar power bank we’re looking at is the most portable by far. The reason for this is that the solar cells are built into the power bank case, eliminating the need for cables, connections, and multiple components. However, the downside is that the size of the solar cells is limited, which means these power banks take quite a while to charge via solar energy. A mid-sized power bank of this size can take a week or two to fully charge, or even longer if you’re not getting direct sunlight. Because of this, all of these devices also feature an input port for faster charging via a wall plug.

The GoerTek ES982 is a powerful, 25,000mAh solar power bank. It has a compact design, and only weighs a little more than a pound. In addition to recharging via solar, it can also be recharged via USB, like a standard power bank. It features a built-in carrying loop, along with a carabineer that allows it to be mounted just about anywhere. It even has a flashlight built-in, so it can serve multiple purposes.

Read our full review of the ZEROLEMON SurvivalJuice

The ZEROLEMON SurvivalJuice provides a lot of juice, with a 26,800mAh capacity that can charge the latest iPhone more than 7 times. It offers 3 USB ports, including a quick-charge port that allows you to charge your phone in under an hour. It’s relatively compact and features a built-in flashlight for added functionality. It also comes with a D-ring-style mounting hook for attaching it to the outside of your bag. It’s rain-resistant, which means it can withstand rain and splashes, but not full immersion.

The RAVPower RP-PB183 is a standalone solar power bank with a 20000mAh capacity. It has 2 USB charging ports, and can also charge via USB if you don’t want to wait for it to recharge via the solar panel. It also has a built-in LED flashlight. It’s water-resistant, but RAVPower has not provided an IP rating in this regard.

The second type of power bank we’re looking at comes with a foldable solar cell. This provides for significantly more surface area, which means they can charge quicker via solar energy. Depending on the amount of sunlight you’re getting, they can generally charge in 1-3 days.

Many are even designed to be hung on a tent or backpack. This provides a great deal of versatility. On the other hand, the foldable solar cells require more space than a power bank with built-in cells.

The Hiluckey HI-S025 has a capacity of 25000mAh, which offers enough juice to recharge your phone multiple times. When collapsed, it’s fairly compact, and the four solar panels unfold easily for recharging. The actual power bank can be detached from the solar panels, which allows for easy charging. And it’s IPX7 water-resistant, which means it can withstand submersion.

The Addtop HI-S025 is a 25,000mAh power bank with a foldable 4-panel solar charger attached. When collapsed, it’s about the size of an iPhone and case, with a built-in LED flashlight to boot. It’s also IPX6 water-resistant, so it’s okay to use in the rain.

The POWOBEST YD-820W has a 20,000mAh capacity, which is fairly large. In addition to the dual USB ports, it also features a built-in Qi charger, so it can charge your devices that support wireless charging. Wireless charging is quite rare for a solar power bank, so this might be a feature that can tip the scales if it’s something you’re looking for.

The last type of device we’ll be looking at is a standalone set of foldable solar cells. These devices don’t come with their own power banks, and they can be used in two different ways. First, you can use them to charge a power bank that you already own. Secondly, you can use them to directly charge your devices. This means you won’t need to carry a power bank at all, just your solar cells.

In addition, dedicated solar cells are generally larger than the cells that are built into power banks. As a result, they deliver even faster charging. A typical dedicated solar cell panel will recharge a 25000mAh battery in about 10 hours, provided you’re getting direct sunlight.

These days, most standalone solar cells have a USB output, which will be compatible with most power banks and cell phones. However, make sure to check the specifications before you make a purchase.

The RAVPower B06XBGSS2R is a standalone solar panel that’s compact when folded but expands to five times the size when unfolded. It has three small USB dongles attached, which allows for the charging of 3 devices simultaneously. Under direct sunlight, it can provide 4.8 amps of power, although performance will drop under less optimal conditions. It’s not water-resistant, but it’s easy to carry.

Read our full review of the Ankery 21W Solar Charger

The Anker AK-A2421011 is exceptionally lightweight, weighing in at less than a pound. This makes it ideal for travel. It also has a built-in pocket to protect your devices while they’re charging. That said, the unit itself is not water-resistant, so be careful about leaving it out unattended.

Read our full review of the Nekteck 21W Solar Charger

The Nekteck 21W portable solar charger is a foldable solar panel with 2 USB charging ports for plugging in your devices. It’s ideal for outdoor use, with 2 mounting hooks to carry it wherever you like. It’s also IPX4 water-resistant, which means you can leave it out in the rain without any serious concerns.

So, why would you use a solar power bank, instead of a standard plug-in power bank? For many people, a plug-in power bank can be good enough. But there are several good reasons to consider a solar-powered option. Here are a few of them.

They’re a great choice for camping

If you’re spending a week or more in the wilderness, it can be almost impossible to keep your phone charged via a standard power bank. It’s feasible if you leave the phone off except for occasional check-ins. But if you’re taking pictures or videos, you’re going to need to recharge a few times. A solar power bank will extend the power you have available in remote locations, so you can enjoy your camping trip without fretting over batteries.

Solar power banks are also a good choice for hunting cabins and wilderness retreats. You won’t be able to run a house full of lights, but you’ll be able to use your phone for an extended amount of time. You’ll also be able to recharge flashlights that have USB charging ports.

In the event of an emergency or natural disaster, you might not have access to wall power for charging your devices or your power bank. In this case, a solar power bank gives you a way to keep your phone charged, so you can stay in touch with relatives or for contacting emergency services.

Before we wrap up, we thought we’d answer a few common questions about solar power banks. Here are a few things we haven’t covered so far.

How does a solar power bank work?

When sunlight strikes the photovoltaic cells, light particles called photons strike some of these electrons, knocking them out of the circuit like billiard balls. These free electrons are then collected by a conductive plate, which allows the electrons to recharge the attached battery. Generally, the battery itself will be either lithium-ion or lithium-polymer, since lithium allows for easy electron flow and, hence, easy recharging.

How long do solar power banks take to charge?

In order to calculate the charge time, you would do the reverse. You would measure how many amps the solar panel is putting out, and multiply that by the number of hours the power bank is charging for. So, a 1-amp solar panel will charge a 25,000mAh battery in 25 hours of direct sunlight.

However, most solar power bank manufacturers don’t tell you how many amps their solar panel puts out. Even if they do, the number assumes direct sunlight. In practice, you’re almost never going to have your solar panel in direct sunlight all day long. There will be periods of shade, clouds, rain, and other conditions that lower the panel’s efficiency.

As a result, the best we can do is give you a general rule of thumb. A 25,000mAh solar power bank with a built-in panel will take about a week to two weeks to fully charge. By contrast, a similarly-sized power bank with a foldable panel will charge in 2 or 3 days, and a standalone panel will get the job done in 12 to 13 hours. To get a better estimate, consider your location. If you’re using your power bank in Southern California chaparral, your performance will be towards the faster end of the spectrum. If you’re in the woods of New England, your performance will be towards the lower end of the spectrum.

This sounds slow. Why not just use a traditional power bank?

What are the different types of waterproofing these devices have?