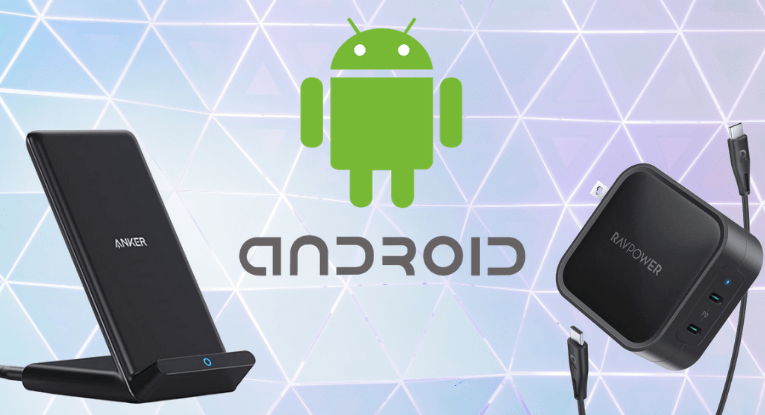 Android chargers come a dime a dozen and most people don’t really pay much attention to them. That’s until they start missing or when phones are charging painfully slow. The truth is that a good Android charger can save you a lot of frustration and time. However, the best charger is not the same for everyone.

Which type of  Android charger is best for you?

As a point of reference, you should know that the majority of Android smartphones come with standard chargers that have a rating of 5V/2A. Some flagship phones, however, come with faster chargers. But regardless of what type of charger your phone might come with by default, it might be possible that you can get a faster charge by using a better adaptor.

For example, there are some pretty powerful wall chargers with high max outputs (30W, 60W or even 90W) with Power Delivery ports that are suitable even for charging laptops, but can also be used for your smartphone.

Let’s take a look at some of the top-of-the-line Android chargers available on the market that will enable you to replenish your smartphone in the best way possible.

Today’s fastest chargers are built using GaN technology. Gallium Nitride (GaN) is a chemical compound that contains semiconductor properties widely used in Light Emitting Diodes (LEDs), transistors, and amplifiers. It also has a wide range of benefits over the traditional silicon-based devices, which is mainly due to its wider 3.4 eV band-gap over silicon’s 1.1 eV. It’s also capable of handling higher power, higher temperatures, and 1,000x the electron mobility that silicon has. This makes it possible to replace silicon semiconductors with GaN in power conversion RF and a variety of analog applications.

The RAVPower 90W 3.0 Power Delivery wall charger is a complete beast. With its amazing max 90W output it can provide a rapid charge for almost any Android phone. It’s even capable of charging laptops and other powerful gadgets including gaming consoles such as the Nintendo Switch. It also has a built-in identification chip that detects the current and voltage requirements of a connected device.  You can use the dual USB type C ports to simultaneously replenish two different gadgets.

The GaN & Pi chip work really well together to reduce power consumption, maximize charging efficiency, and deliver up to 90W of power in a small unit. The wall charger also has built-in safety features to protect your device against overheating, overcurrent, overvoltage and short-circuit.

It can charge basically any Android smartphone such as the Samsung S9, S8, etc.

Note: although this charger is capable of 90W, most Android phones don’t support such a high output level. So your phone will charge at its maximum capacity. This is a great option if you also want to charge other devices such as laptops or gaming consoles.

The Anker 30W Ultra Compact wall charger delivers a high-speed charge to Android and Apple smartphones, tablets, laptops, and all kinds of USB-C devices via the Power Delivery USB port. Thanks to the GaN technology, this gadget doesn’t heat up as much and it’s also 40% smaller than standard MacBook chargers. It even has MultiProtect technology that will help to keep you and your gadgets safe while it’s in use.

Maybe one of the best features of the Anker 30W is its size. At only 1.6 x 1.5 x 1.4 inches, it’s smaller than the average charger, but it can deliver a greater charge.

This is the best option for people looking for fast charging and an affordable price.

If you’re on a tight budget or you keep losing your chargers once every few weeks, you should purchase the Android wall charger micro kit. It has dual USB Type-A ports that allow you to simultaneously charge two of your devices with a rating of 5V/2.1A. This definitely not the fastest way to charge your Android phone, but it gets the job done.

It’s also compatible with all types of micro-USB devices, including gaming consoles, tablets, cameras, portable music players, etc. AbcPow’s wall charger contains built-in safety features to protect your unit from over-charging, overcurrent, and over-heating. It’s also capable of shutting itself off to stop charging whenever it fully refreshes your device.

The nylon micro cable is rugged, which will provide you with the ultimate charging experience. It can cover a long distance (6ft), so you can power-up your gadgets far away.

Wireless charging pads allow you to power-up your devices using a different approach from the standard wall charger. Instead of using physical cables to power-up your device, an electrical current is passed through two coils, which creates magnetic fields. As the magnetic plate on the smartphone comes in contact with the transmitter pad, the magnetic field produces an electrical current in the device.

Afterward, the current is transformed into DC. This allows the built-in battery of your smartphone to be replenished without using cables or a wired charger. Usually, this involves using an energy transmitting pad along with a receiver, which is sometimes built into a mobile device or comes in a case-like shape attached to a smartphone.

Qi is the main wireless standard. It was developed by the Wireless Power Consortium (WPC) for inductive charging up to 40mm.

Yootech’s wireless charger is compatible with many Android smartphones, tablets and other gadgets. It provides three different charging modes. This unit was also designed with superior safety in mind. It contains a multiprotection system with temperature control and keeps connected devices safe from short-circuits and surges. It’s capable of charging through most cases too, so you won’t have to worry about interference. This also comes bundled with one USB-A to USB-C cable and one USB-C to USB-C cable, which will be useful for other phones.

You can quickly replenish your smartphone with Anker’s wireless charger. It’s compatible with Android mobile devices and you can even power-up your gadgets horizontally or vertically while using it. The chipset delivers 10W high-speed charging for Samsung Galaxy smartphones which is 10% faster than other wireless chargers. If you have a rubber/plastic/TPU case for your phone, you won’t have to remove it as long as it’s less than 5mm thick. Otherwise, it won’t be able to charge if the case has magnetic and metal attachments or any type of card.

Power banks have built-in batteries that contain an internal circuit to control power flow and protect the unit from damage. They’re very useful if you want to power your Android phone on the go. We all experienced that Murphie law which makes us run out of power when we need our phone the most. With a power bank around, these problems are a thing of the past.

It’s generally a good idea to purchase a compact and sturdy power bank that has a large capacity with fast charging technology such as Power Delivery or Qualcomm Quick Charge. Devices that meet these conditions last longer due to their higher quality build.

We recommend purchasing the RAVPower 20000mAh PD 60W, which is a compact device with a high capacity and fast charging speed. You can read up on our review of this product here: Compact, portable, well-built, and equipped with PD and QC, the RAVPower 20000mAh is the perfect companion to charge your devices.

Can you use an Android charger to charge an iPhone?

Yes, charging cables can affect the charging speed. The cable controls how quickly your devices power-up, so even if you’re using a fast charge adapter with a standard cable, it most likely won’t replenish your device at the quickest possible speed. That’s mainly because it depends on the size of the 2.5V wires in the USB cable that determines how much power it can carry. Standard cables are typically 28 gauge and are capable of .5A. Faster cables have larger wires (24 gauge) that can deliver currents of 2A or higher. You will be required to use a decent cable that supports fast charge.

They usually come in a wide range of different qualities, but those that are poorly made will lose a significant amount of energy. This will cause your mobile device to charge slowly. It’s strongly advised to use a high-quality cable that will allow fast charging.