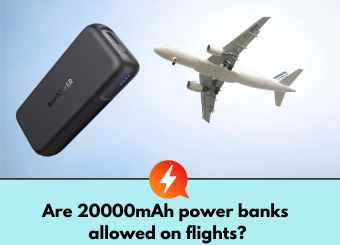 You may have a large capacity power bank that you will want to take with you when you’re on a flight. Many airlines enforce a strict 100Wh limit on flights. Even though most power banks are below this limit, it would still be a good idea to check your battery’ packs Wh. This is to ensure there won’t be any problems when you board a flight.

Generally, it’s pretty safe to take a 20000mAh power bank aboard with you since it only has 74Wh, falling below the 100Wh limit. You can easily calculate this just to be sure. Since the majority of battery packs are advertised based on their charge, a conversion will need to be done to get the total energy. To do this, multiply the mAh by the battery’s nominal voltage (usually 3.7V) and divide it by 1000. For example, 20000mAh * 3.7V/1,000 = 74Wh.

Alternatively, you can use our handy mAh to Wh calculator.

To prevent any issues from arising at the airport, you should make sure that the Wh and/or the mAh capacity is clearly displayed on the power bank. If the capacity is not visible on the product, you may have issues in some airports as they won’t be able to tell the exact capacity of your device. This is especially true when traveling internationally, where rules may be more strict.

What is the maximum mAh allowed on a plane?

The maximum battery capacity you’re allowed to bring on a plane is 100Wh or around 27000mAh. Even though they come in a wide range of voltages and ratings, an average 3.7V power bank would have to be approximately 27000mAh before going over the 100Wh limit. As long as it displays “3.6V” or “3.7V” with a number close to 27000mAh, chances are that it’s ok to take on a flight.

Furthermore, you are allowed to take two 100Wh devices with you in your carry-on luggage. So all in all, you could fly with 200Wh worth of battery capacity, which is around 54000mAh.

However, power banks between 100Wh and 160Wh can still be taken aboard a plane with you, but they will need special airline approval. If you have one with a large capacity, you should find out how many Wh it has. Then you will need to contact the airline at least 72 hours prior to your flight to inform them your device is over 100Wh. As long as it’s below 160Wh, the airline will let you through security.  If you need more power, you can carry up to two extra batteries in carry-on bags as long as they don’t exceed 160Wh in total.

Anything over 160Wh would cause issues solely because it’s classified as dangerous cargo and they will require special permissions to take aboard a plane. Just for reference, a 160Wh power bank is approximately 44000mAh at 3.6V. This likely isn’t something you would need to worry about since power banks of this size are generally difficult to find. You will still need to contact the airline if this issue arises.

There is also a rule that you are required to follow when it comes to boarding a flight with a power bank. Since power banks contain a rechargeable lithium-ion battery, it needs to be stored in your carry-on bag. This is because it’s a lot safer to keep them in an area where they can be monitored. Keeping it in the cargo hold is more dangerous than storing it in the cabin because it’s harder to notice if it catches fire. This is especially true for large capacity power banks rated 20000mAh or higher since they could be more explosive than the others with a lower rating.

Accidentally taking a large capacity power bank on a flight or putting it in checked luggage isn’t very likely to cause a huge problem. Most likely you will be required to take it out from your baggage, but in some cases, your device may be confiscated by the airport security.

All-in-all 20000mAh power banks are completely fine to take on a plane. In fact, you can have two 2000mAh power banks with you on any give flight without any issue. Just make sure that the capacity is clearly printed on one of the sides of the device, especially if traveling internationally.